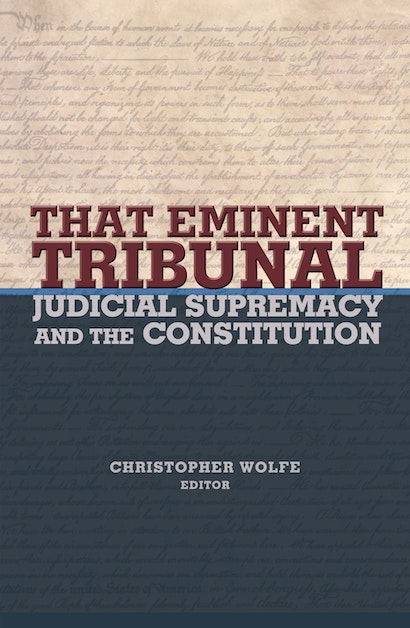 The role of the United States Supreme Court has been deeply controversial throughout American history. Should the Court undertake the task of guarding a wide variety of controversial and often unenumerated rights? Or should it confine itself to enforcing specific constitutional provisions, leaving other issues (even those of rights) to the democratic process?

That Eminent Tribunal brings together a distinguished group of legal scholars and political scientists who argue that the Court’s power has exceeded its appropriate bounds, and that sound republican principles require greater limits on that power. They reach this conclusion by an interesting variety of paths, and despite varied political convictions.


Some of the essays debate the explicit claims to constitutional authority laid out by the Supreme Court itself in Planned Parenthood v. Casey and similar cases, and others focus on the defenses of judicial authority found commonly in legal scholarship (e.g., the allegedly superior moral reasoning of judges, or judges’ supposed track record of superior political decision making). The authors find these arguments wanting and contend that the principles of republicanism and the contemporary form of judicial review exercised by the Supreme Court are fundamentally incompatible.

Christopher Wolfe is Professor of Political Science at Marquette University. He is the author of How to Interpret the Constitution, Judicial Activism, and The Rise of Modern Judicial Review.

"This is a very impressive collection of essays by a group of scholars who are at, or entering, the peak of their careers—and stars and superstars they are. From a variety of perspectives, but with a shared spirit, they analyze the way the contemporary Supreme Court understands judicial power and its role in the American polity. Rather than harness the courts, they seek to breed a better sort of justice, or less metaphorically, to develop a concept of judicial power and of the place of constitutional law within the polity that will in the long run result in the repair of the wrongs they discover."—James R. Stoner, Jr., Louisiana State University, author of Common-Law Liberty: Rethinking American Constitutionalism

"This is one of the few academic books that leave the reader asking for more rather than less. It is by a group of leading scholars who lament the judicial activism of federal courts over the past half-century, and particularly since Roe v. Wade. The variety and trenchancy of its arguments make it a significant contribution to the scholarly, and popular, debate over judicial power."—Charles R. Kesler, Claremont Institute, Editor of the Claremont Review of Books