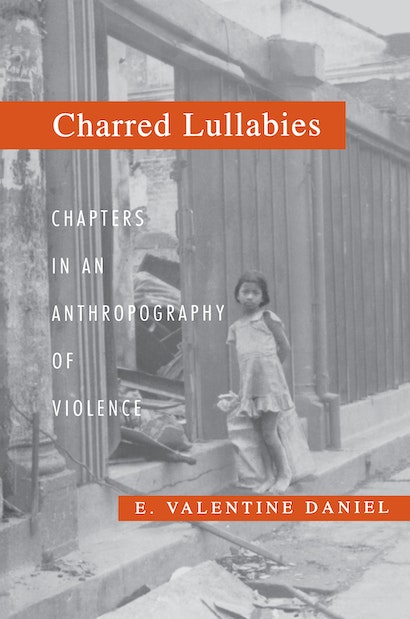 How does an ethnographer write about violence? How can he make sense of violent acts, for himself and for his readers, without compromising its sheer excess and its meaning-defying core? How can he remain a scholarly observer when the country of his birth is engulfed by terror? These are some of the questions that engage Valentine Daniel in this exploration of life and death in contemporary Sri Lanka. In 1983 Daniel “walked into the ashes and mortal residue” of the violence that had occurred in his homeland. His planned project — the study of women’s folk songs as ethnohistory — was immediately displaced by the responsibility that he felt had been given to him, by surviving family members and friends of victims, to recount beyond Sri Lanka what he had seen and heard there. Trained to do fieldwork by staying in one place and educated to look for coherence and meaning in human behavior, what does an anthropologist do when he is forced by circumstances to keep moving, searching for reasons he never finds? How does he write an ethnography (or an anthropography, to use the author’s term) without transforming it into a pornography of violence? In avoiding fattening the anthropography into prurience, how does he avoid flattening it with theory? The ways in which Daniel grapples with these questions, and their answers, instill this groundbreaking book with a rare sense of passion, purpose, and intellect.

E. Valentine Daniel is Professor of Anthropology at Columbia Universityr. He is the author of Fluid Signs: Being a Person the Tamil Way.

"Without doubt one of the most important accounts of nationalist violence to be published in recent years. . . . Charred Lullabies is a major addition to the growing theoretical and ethnographic literature on contemporary political violence."—Amitav Ghosh

"E. Valentine Daniel does not wallow in the negations of terror; he finds a place somewhere between sensation and detachment from which to show how the wounded return to speech—even poetry. In the process, he is drawn to reflect on the place of violence in our modern understanding of culture writ large, producing an account of unusual insight and troubling beauty."—Jean Comaroff, University of Chicago