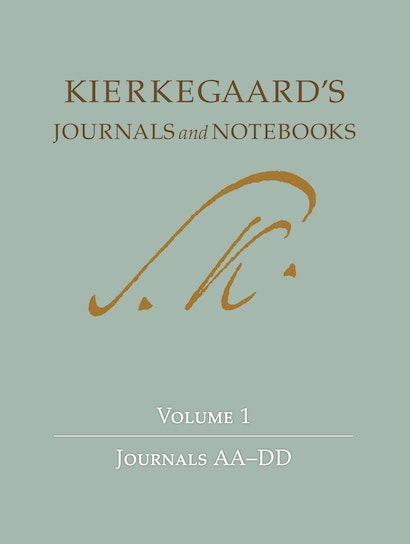 I would like to write a novel in which the main character would be a man who got a pair of glasses, one lens of which reduced images as powerfully as an oxyhydrogen microscope, and the other of which magnified on the same scale, so that he perceived everything relatively.
?


A flight of fancy by an aspiring science fiction writer? While it may sound as such, this wistful musing is one of the little-discussed personal reflections of nineteenth-century philosopher Søren Kierkegaard, whose remarkable journals and notebooks, unpublished during his lifetime, are presented here.


The first of an eleven-volume series produced by Copenhagen’s Søren Kierkegaard Research Centre, this volume is the first English translation and commentary of Kierkegaard’s journals based on up-to-date scholarship. It offers new insight into Kierkegaard’s inner life. In addition to early drafts of his published works, the journals contain his thoughts on current events and philosophical and theological matters, notes on books he was reading, miscellaneous jottings, and ideas for future literary projects. Kierkegaard wrote his journals in a two-column format, one for his initial entries and the second for the marginal comments he added later. The new edition of the journals reproduces this format and contains photographs of original manuscript pages, as well as extensive scholarly commentary. Translated by leading experts on Kierkegaard, Journals and Notebooks will become the benchmark for all future Kierkegaard scholarship.

Bruce H. Kirmmse, Professor of History at Connecticut College, is the author of Kierkegaard in Golden Age Denmark and the translator of Søren Kierkegaard: A Biography (Princeton).

"The volume is nothing short of an editorial tour de force. It will be indispensable for all libraries supporting graduate work on Kierkegaard."—P.K. Moser, Choice

"Because they contain important philosophical insights and clues to the meaning of the text in his published works, and this unconditioned by pseudonymity, most scholars have traditionally sought to find there what are presumed to be Kierkegaard's own views. . . . This volume and those to come will enrich and deepen the scholarly discussions of Kierkegaard's thought in the English-speaking world."—Andrew S. Nam, Religious Studies Review