Why absolute certainty is impossible in science 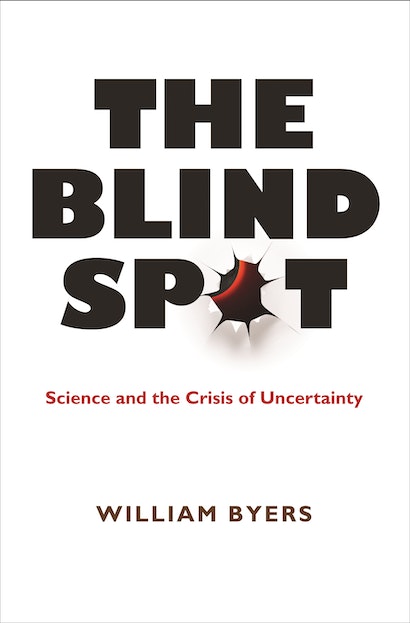 In today’s unpredictable and chaotic world, we look to science to provide certainty and answers—and often blame it when things go wrong. The Blind Spot reveals why our faith in scientific certainty is a dangerous illusion, and how only by embracing science’s inherent ambiguities and paradoxes can we truly appreciate its beauty and harness its potential.

Crackling with insights into our most perplexing contemporary dilemmas, from climate change to the global financial meltdown, this book challenges our most sacredly held beliefs about science, technology, and progress. At the same time, it shows how the secret to better science can be found where we least expect it—in the uncertain, the ambiguous, and the inevitably unpredictable. William Byers explains why the subjective element in scientific inquiry is in fact what makes it so dynamic, and deftly balances the need for certainty and rigor in science with the equally important need for creativity, freedom, and downright wonder. Drawing on an array of fascinating examples—from Wall Street’s overreliance on algorithms to provide certainty in uncertain markets, to undecidable problems in mathematics and computer science, to Georg Cantor’s paradoxical but true assertion about infinity—Byers demonstrates how we can and must learn from the existence of blind spots in our scientific and mathematical understanding.

The Blind Spot offers an entirely new way of thinking about science, one that highlights its strengths and limitations, its unrealized promise, and, above all, its unavoidable ambiguity. It also points to a more sophisticated approach to the most intractable problems of our time.

William Byers is professor emeritus of mathematics and statistics at Concordia University in Montreal. He is the author of How Mathematicians Think: Using Ambiguity, Contradiction, and Paradox to Create Mathematics (Princeton).

"Science has been under siege during the last quarter century, first by critics who charge that science itself is a cultural construct and that scientists import their own belief systems into their research. Retired math professor Byers (How Mathematicians Think) argues that much of the problem lies in what he calls the 'science of certainty.' . . . Instead, Byers says, scientists need to recognize 'uncertainty, incompleteness, and ambiguity, the ungraspable, the blind spot, or the limits to reason.'"—Publishers Weekly

"Is the idea that anything can be determined with absolute certainty an illusion? . . . Byers incorporates many brilliant thinkers and seminal scientific breakthroughs into his discussion, offering the cogent, invigorating argument that only by embracing uncertainty can we truly progress."—Kirkus Reviews

"Science deals in certainties, right? Wrong, says Montreal-based mathematician William Byers. . . . He contends that this view is wide of the mark and dangerous, influenced by the human need for everything to be 'certain'."—Alison Flood, Wired

"I've sometimes remarked that I think our educational system would benefit if we threw Shakespeare in the trash bin, but required all high-schoolers to read Godel and Cantor (well, their interpreters) . . . or perhaps now, just substitute Byers! . . . [The Blind Spot] should be read and contemplated by every scientist . . . and even applied to their own endeavors."—Math-Frolic!

"A passionate, informed manifesto that takes aim at our culture's reigning myth of scientific certainty. Byers would like to debunk that myth, and put in its place a science of wonder that freely acknowledges its 'blind spot'—a metaphor for all that remains inherently and irreducibly unknowable, ambiguous, and mysterious. . . . The Blind Spot is an important book for our time, part of a necessary and pressing debate about how to think, and live, within limits both certain and otherwise."—Alex Good, Quill & Quire

"[The Blind Spot] is an enjoyable read and makes several interesting points."—Choice

"Byers' breadth of learning is impressive, appealing to chaos theory, quantum mechanics, philosophy and beyond in making his case."—Paul Taylor, Mathematics Today

"Byers skillfully evokes questions about science and causes readers to reflect on the implications of the blind spots in mathematics and sciences by drawing on notable works across multiple academic fields. I highly recommend this book for anyone in higher education with an appreciation for the philosophy of mathematics and the sciences."—Ruthmae Sears, Mathematics Teacher

"Byers has taken on a tremendously challenging task, one so daunting that it is hardly conceivable that it could be accomplished. The Blind Spot represents a serious advance, which in itself is very important and impressive."—Reuben Hersh, National Book Award-winning coauthor of The Mathematical Experience

"The myth of absolute predictability has polluted our society and led to a lack of flexibility and imagination. Byers takes on the difficult challenge of formulating a better worldview, in effect a new kind of philosophy of science and mathematics that emphasizes creativity and wonder. He sees more deeply than others into the profoundly and richly ambiguous nature of mathematical and scientific concepts."—Gregory J. Chaitin, author of Thinking about Gödel and Turing

"This is an extremely ambitious book. In addition to science and mathematics, Byers brings to bear insights from literature, philosophy, religion, history, anthropology, medicine, and psychology. The Blind Spot breaks new ground, and represents a major step forward in the philosophy of science. The book is also a page-turner, which is rare for this topic."—Joseph Auslander, professor emeritus, University of Maryland