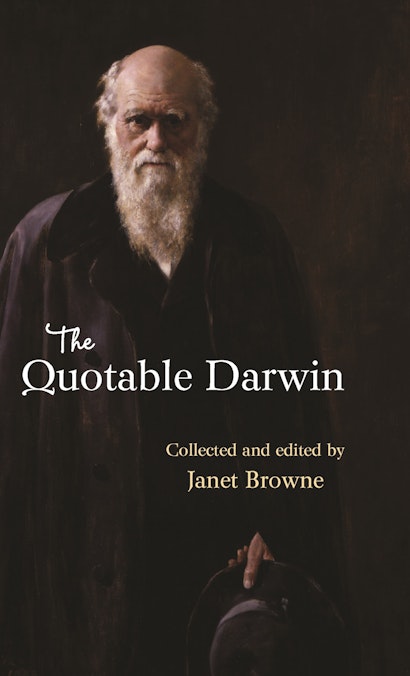 Here is Charles Darwin in his own words—the naturalist, traveler, scientific thinker, and controversial author of On the Origin of Species, the book that shook the Victorian world. Featuring hundreds of quotations carefully selected by world-renowned Darwin biographer Janet Browne, The Quotable Darwin draws from Darwin’s writings, letters to friends and family, autobiographical reminiscences, and private scientific notebooks. It offers a multifaceted portrait that takes readers through his youth, the famous voyage of the Beagle, the development of his thoughts about evolution, his gradual loss of religious faith, and the time spent turning his ideas into a well-articulated theory about the natural origin of all living beings—a theory that dangerously included the origin of humans.

The Quotable Darwin also includes many of the key responses to Darwin’s ideas from figures across the social spectrum, scientists and nonscientists alike—and criticism too. We see Darwin as an innovative botanist and geologist, an affectionate husband and father, and a lively correspondent who once told his cousin that he liked to play billiards because “it drives the horrid species out of my head.” This book gives us an intimate look at Darwin at work, at home, as a public figure, and on his travels.

Complete with a chronology of Darwin’s life by Browne, The Quotable Darwin provides an engagingly fresh perspective on a remarkable man who was always thinking deeply about the natural world.

Janet Browne is the Aramont Professor of the History of Science at Harvard University. Her books include the acclaimed two-volume biography of Darwin, Charles Darwin: Voyaging and Charles Darwin: The Power of Place (both Princeton). She lives in Cambridge, Massachusetts.

"’At last gleams of light have come. . . . I think I have found out (here’s presumption!) the simple way by which species become exquisitely adapted to various ends.’ Thus, Charles Darwin to botanist Joseph Dalton Hooker in an 1844 letter—just one gem from Janet Browne’s selected excerpts. Darwin vividly emerges as a crack shot with a tin ear for music, a loving father, a would-be anthropologist struggling to understand indigenous peoples and the consummate scientist, working ‘from a sort of instinct to try to make out truth’."—Barbara Kiser, Nature

"Fans of Janet Browne's epic two-volume biography of Charles Darwin will not want to miss her new book, The Quotable Darwin, which features a broad selection of Darwin's personal and professional observations on life, liberty, and of course science."—John Farrell, Forbes.com

"The selection of quotes from Darwin’s books and his letters are grouped into chapters with headings that are expected, such as Species or Survival of the Fittest, and less expected, such as one of my favourites, Barnacles."—The Australian

"This book works because [Darwin’s] own words paint an unexpectedly complete and truthful picture of the man (brilliance, wit, sickness), his times—and limitations."—Liz Else, New Scientist

"[Browne's] book delves into the mind of Darwin, revealing his insights, humor, and understanding of the world as he knew it. Darwin’s words never get old, and Browne’s treatment of his wisdom does not disappoint. Her book is a must for any dedicated student of Charles Darwin, and the novice reader alike."—Howard O. Clark, Jr., Sonoran Herpetologist

"The Quotable Darwin is fascinating, funny, and humanizing. It brings an icon to life."—Glenn Dallas, San Fransisco Book Review

"If anyone ever asks me which figure from history I'd invite to a dinner party, my instant answer will be Charles Darwin. This book of quotations is one long argument for his profundity, warmth, charm, wit, and humanity. Even readers who already know him well will discover something new and delightful here."—Jonathan Weiner, author of the Pulitzer Prize–winning The Beak of the Finch

"Nobody knows Darwin as Janet Browne does. Her intimate familiarity with the subject shows here in an abundance of well-chosen quotations. Through Darwin's own words, we learn how the aspiring naturalist matured with experience into the scientist whose revolutionary theory on evolution has been described as the greatest intellectual contribution to the nineteenth century. The portrait is vivid and truthful."—Peter R. Grant, coauthor of 40 Years of Evolution: Darwin's Finches on Daphne Major Island

"An enlightening and entertaining collection of Darwin's thinking on a wonderful diversity of topics, personal and scientific. The Quotable Darwin enables readers to see and understand Darwin in a new way, through his own words and those of his contemporaries. His humor, humility, frustrations, exultations, and more come through nicely in these well-selected quotes."—James T. Costa, author of Wallace, Darwin, and the Origin of Species