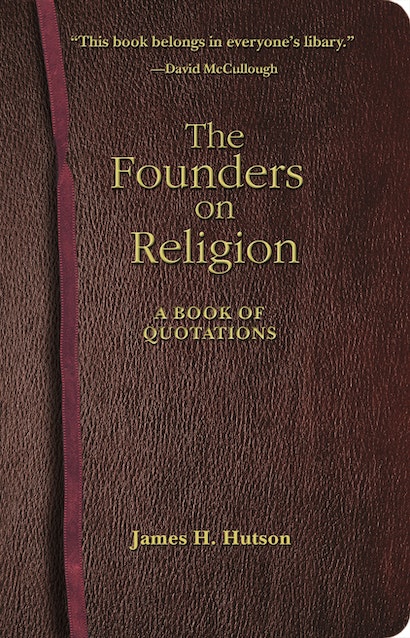 What did the founders of America think about religion? Until now, there has been no reliable and impartial compendium of the founders’ own remarks on religious matters that clearly answers the question. This book fills that gap. A lively collection of quotations on everything from the relationship between church and state to the status of women, it is the most comprehensive and trustworthy resource available on this timely topic.


The founders quoted here ranged from the piously evangelical to the steadfastly unorthodox. Some were such avid students of theology that they were treated as equals by the leading ministers of their day. Others vacillated in their conviction. James Madison’s religious beliefs appeared to weaken as he grew older. Thomas Jefferson, on the other hand, seemed to warm to religion late in life. This compilation lays out the founders’ positions on more than seventy topics, including the afterlife, the death of loved ones, divorce, the raising of children, the reliability of biblical texts, and the nature of Islam and Judaism.


Partisans of various stripes have long invoked quotations from the founding fathers to lend credence to their own views on religion and politics. This book, by contrast, is the first of its genre to be grounded in the careful examination of original documents by a professional historian. Conveniently arranged alphabetically by topic, it provides multiple viewpoints and accurate quotations.


Readers of all religious persuasions — or of none — will find this book engrossing.

James H. Hutson is chief of the Manuscript Division at the Library of Congress. He has been a faculty member of the History Departments at Yale University and the College of William and Mary. His books include John Adams and the Diplomacy of the American Revolution; To Make All Laws: The Congress of the United States, 1789-1989; Religion and the Founding of the American Republic; and, most recently, Forgotten Features of the Founding: The Recovery of Religious Themes in the Early American Republic.

"Seeking to let the Founders speak for themselves on religion, James Hutson has succeeded in producing a book of quotations that is not agenda driven and duly satisfies the canons of historical scholarship."—Terry Eastland, Books & Arts

"James Hutson comes at this project from a different perspective than most. . . . Dr. Hutson is a historian and tries hard to be fair. He organizes the material by subject rather than by author. The strength of his decision is that it underscores the depth and breadth of the Founders' religious interests. . . . This is a most interesting book!"—Jeff Zell, Dallas Morning News

"[James H. Hutson is] a scholar friendly to religion—one who shows little bias in his writings and in his current work. Thus since the Founders differed so much from each other, Hutson offers some conflicting and contradictory comments by these leaders."—Martin E. Marty, The Christian Post

"The Founders on Religion might go a long way toward settling disputes...[Hutson] takes us straight to the sources, with some surprising results. In easy-to-reference form, he shows the founders loved their country but were quite capable of thinking outside the pew."—Susan Campbell, The Hartford Courant

"In easy-to-reference form, he shows that the founders loved their country but were quite capable of thinking outside the pew."—Kevin Eckstrom, Winston-Salem Journal

"What a superb and very welcome book this is. The quotations chosen by James Hutson are more than just wonderful reading. Transcending time, they are as illuminating and provocative, as wise, heartfelt, and uplifting as when they were written. The book belongs in every library. It should be required reading for everyone who teaches or preaches, for every serious student of religion and the good society, every public servant, indeed for every American who cares about the extraordinary minds and bedrock convictions of those we rightly honor as the founders."—David McCullough, Pulitzer Prize-winning historian and biographer, author of John Adams and Truman

"In order to appreciate our values as a nation, it is important to understand how our Founders balanced their faith in divine Providence and their views on the role of government. The best way to do so is to read their own words, and James Hutson makes it possible in this valuable and thoughtful collection."—Walter Isaacson, author of Benjamin Franklin: An American Life

"A very well researched, attractively organized, historically reliable, often entertaining, and sometimes moving treatment of a set of related subjects that remain important for historical purposes as well as for contemporary public discussion. No other book of quotations from the founders has been so carefully selected and edited."—Mark A. Noll, author of America's God: From Jonathan Edwards to Abraham Lincoln

"This is a much needed and thoughtful scholarly edition that will be welcomed by historians and general readers alike."—Frank Lambert, author of The Founding Fathers and the Place of Religion in America (Princeton)

"The Founders on Religion is a significant contribution because of its fair-mindedness and thorough representation of the spectrum of views on religion among the founders. Hutson includes new figures—and new quotes from familiar ones."—Kenneth P. Minkema, Yale University