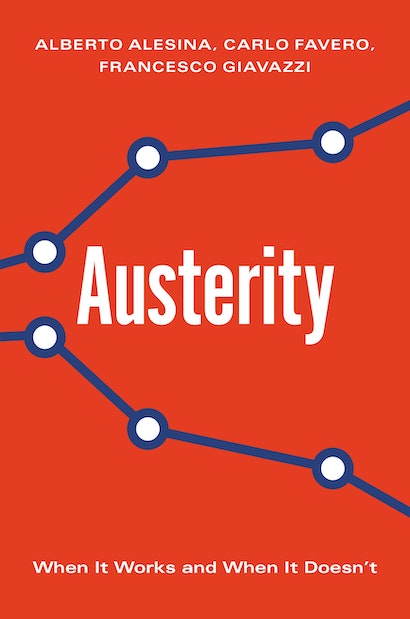 Fiscal austerity is hugely controversial. Opponents argue that it can trigger downward growth spirals and become self-defeating. Supporters argue that budget deficits have to be tackled aggressively at all times and at all costs. In this masterful book, three of today’s leading policy experts cut through the political noise to demonstrate that there is not one type of austerity but many.

Looking at thousands of fiscal measures adopted by sixteen advanced economies since the late 1970s, Austerity assesses the relative effectiveness of tax increases and spending cuts at reducing debt. It shows that spending cuts have much smaller costs in terms of output losses than tax increases. Spending cuts can sometimes be associated with output gains in the case of expansionary austerity and are much more successful than tax increases at reducing the growth of debt. The authors also show that austerity is not necessarily the kiss of death for political careers as is often believed, and provide new insights into the recent cases of European austerity after the financial crisis.

Bringing needed clarity to one of today’s most challenging subjects, Austerity charts a sensible approach based on data analysis rather than ideology.

Alberto Alesina (1957–2020) was the Nathaniel Ropes Professor of Political Economy at Harvard University. He is the author, with Francesco Giavazzi, of The Future of Europe: Reform or Decline. Carlo Favero is the Deutsche Bank Chair in Quantitative Finance and Asset Pricing at Bocconi University in Italy. He is the author of Applied Macroeconometrics. Francesco Giavazzi is professor of economics at Bocconi University.

"This book is timely in offering an alternative view. . . . Read this book as an antidote to the calls for governments to give up on fiscal discipline."—Chris Giles, Financial Times

"It’s an impressive study of nearly 200 episodes of fiscal consolidation in the rich world to understand what’s the best way to go about it. The answer—cutting spending is better than raising taxes—isn’t entirely new, but the supporting evidence is compelling and it will take an equally deep study to make the opposite case."—Ferdinando Giugliano, Bloomberg Opinion

"Austerity is a towering scholarly achievement, embodying decades of research and destined to serve as a touchstone for future studies—both by those who will build on it and by those who will try to tear it down."—Ken Rogoff, Project Syndicate On Point

"This is an extremely important book."—Martin Wolf, Financial Times, Summer Books of 2019

"An important work for economists, policymakers, politicians, and engaged citizens. . . . One of the clearest and best researched treatments of fiscal policy available. And though not quite suitable for the beach, it’s remarkably readable. . . . It should be required reading."—Milton Ezrati, City Journal

"An ambitious book. . . . if you’re looking for a comprehensive discussion of austerity policies, this is the book for you."—James Smith, Society of Professional Economists

"Every chapter in this book is thorough, informative, and persuasive. . . . Without doubt, this is an important book."—Geoffrey Wood, Central Banking Journal

“Austerity is a superb guidebook for policymakers and academic researchers alike. Drawing on the latest academic research and policy experiments, it provides an encyclopedic account of the likely effects of fiscal consolidations on economic outcomes and how those effects might vary according to circumstances.”—Valerie A. Ramey, University of California, San Diego

“This brilliant and important book presents a simple bottom line: when government finances are in danger of spiraling out of control and taking the economy with them, cutting spending is far less damaging than raising taxes, especially the taxes governments tend to raise in a crisis—those on investment.”—John H. Cochrane, author of Asset Pricing

“This is an amazing, important, and timely book by leading thinkers on matters of fiscal policy. Drawing on careful data analysis, Austerity demonstrates how fiscal consolidation is sometimes unavoidable, how spending cuts are better than tax increases, and how politicians pursuing them can get reelected. This is what economics is for! Truly well written, highly recommended.”—Harald Uhlig, University of Chicago

“This pathbreaking book will be the reference for researchers, students, and practitioners for many years to come.”—Charles Wyplosz, coauthor of The Economics of European Integration