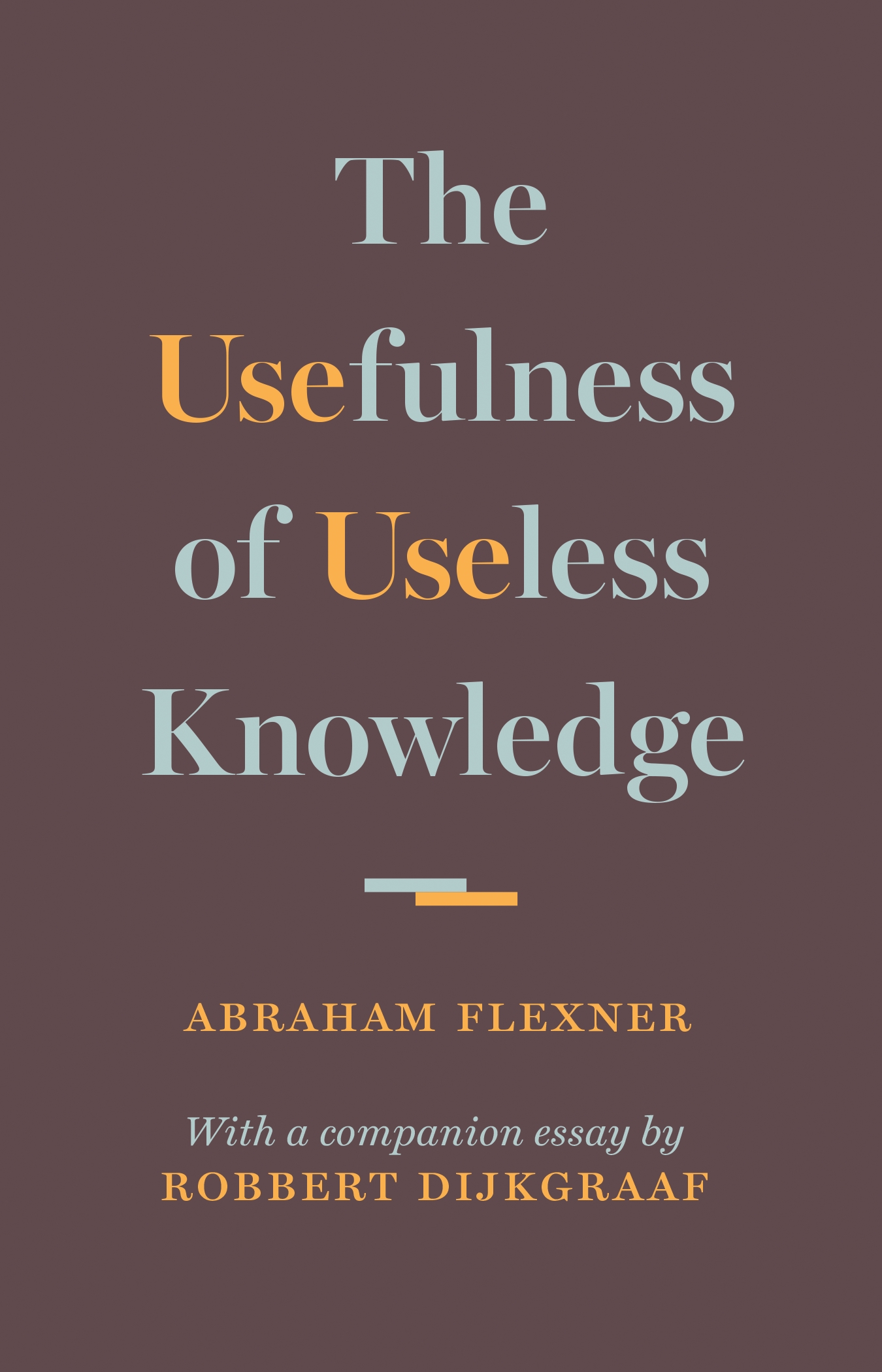 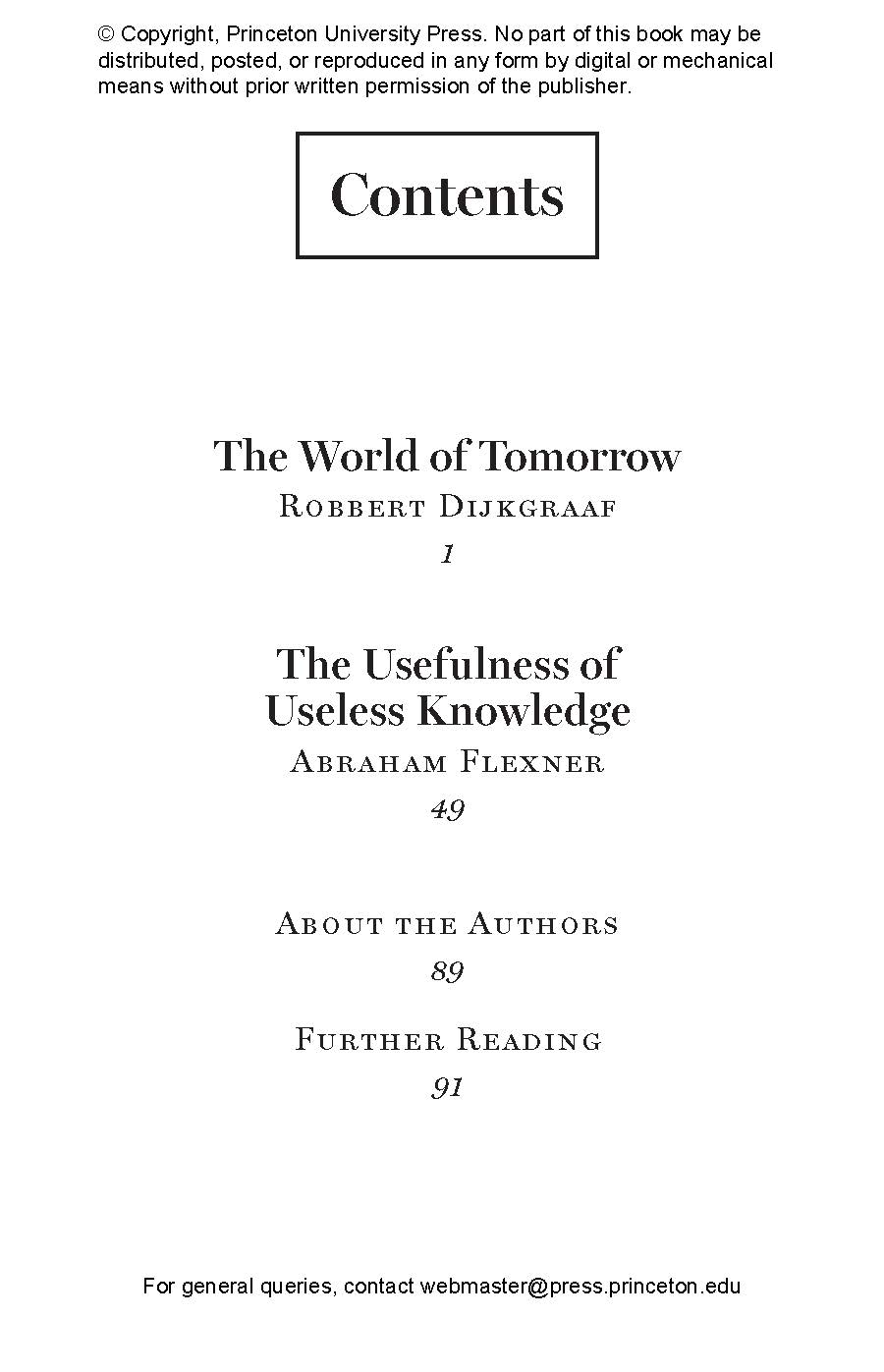 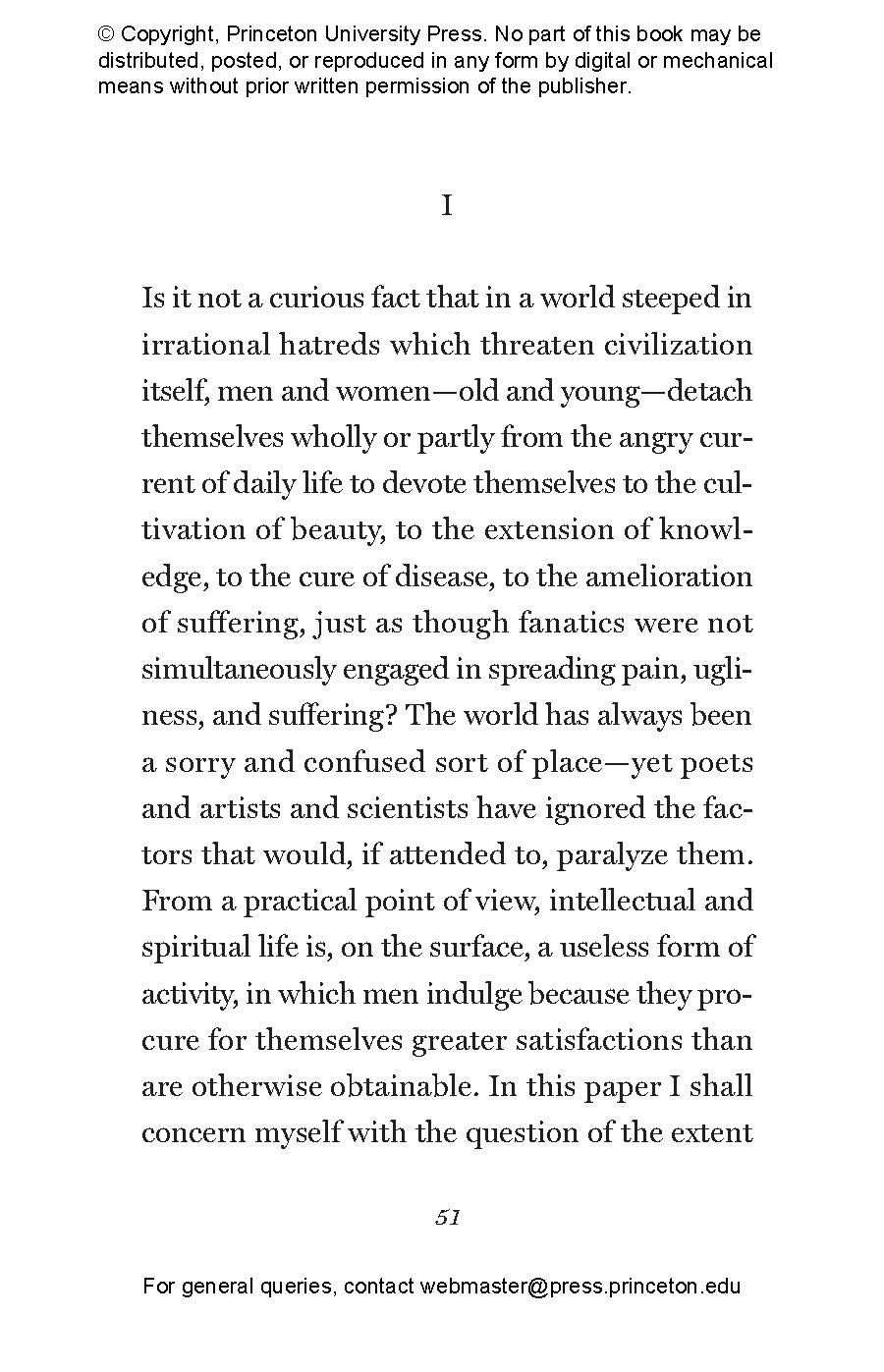 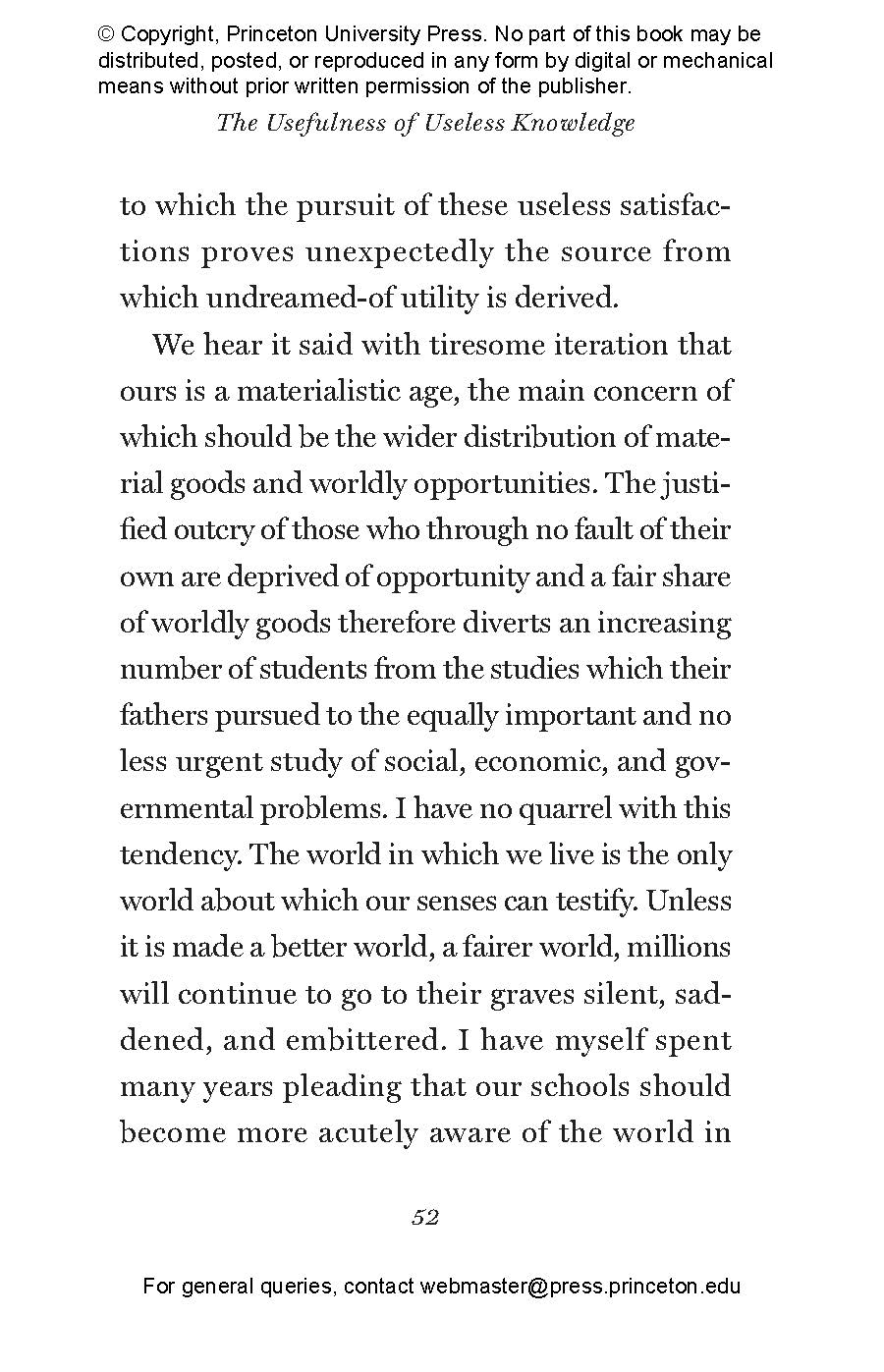 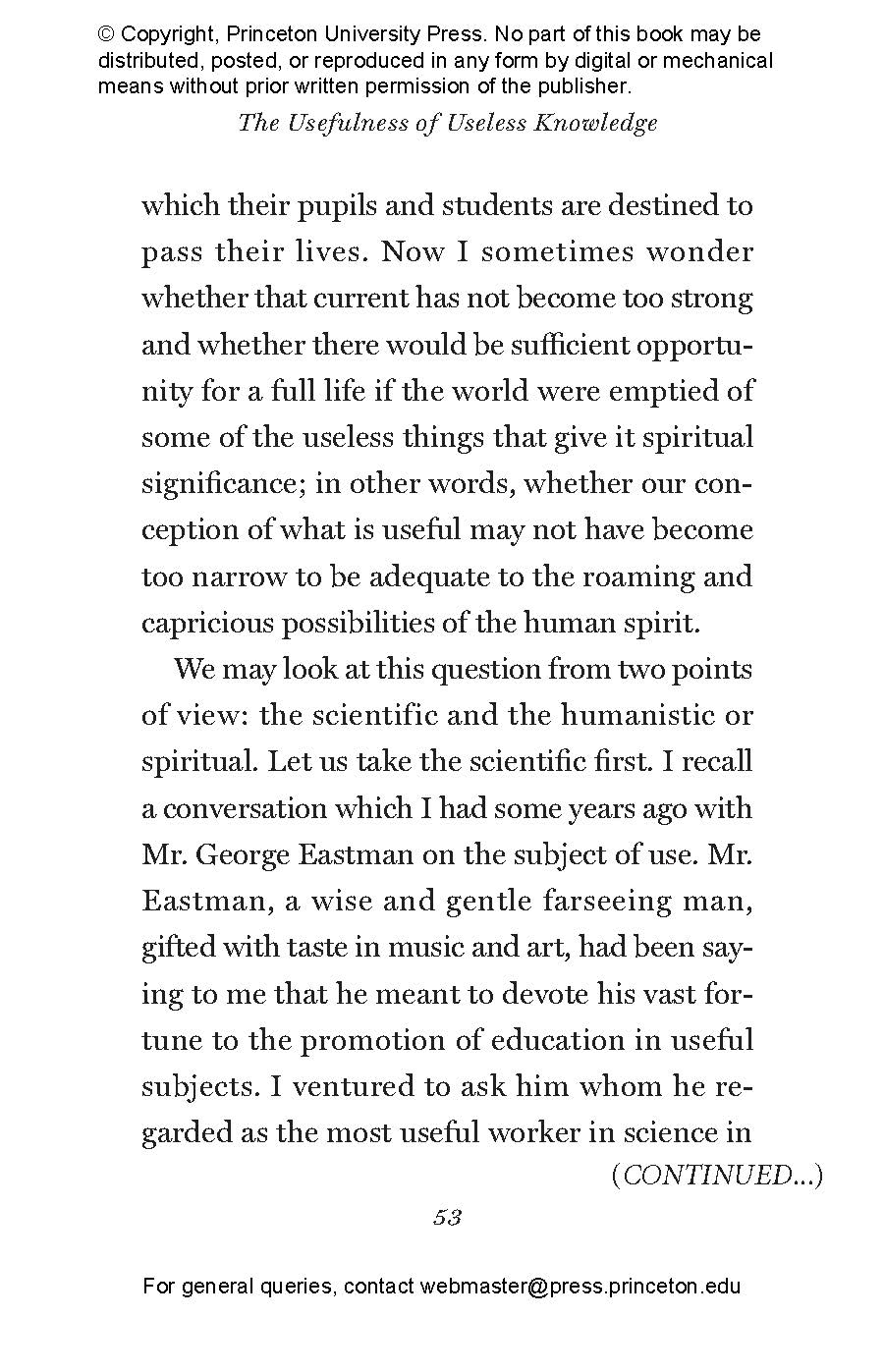 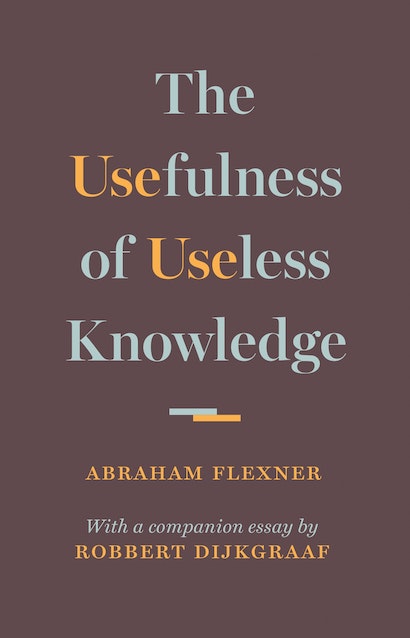 A forty-year tightening of funding for scientific research has meant that resources are increasingly directed toward applied or practical outcomes, with the intent of creating products of immediate value. In such a scenario, it makes sense to focus on the most identifiable and urgent problems, right? Actually, it doesn’t. In his classic essay “The Usefulness of Useless Knowledge,” Abraham Flexner, the founding director of the Institute for Advanced Study in Princeton and the man who helped bring Albert Einstein to the United States, describes a great paradox of scientific research. The search for answers to deep questions, motivated solely by curiosity and without concern for applications, often leads not only to the greatest scientific discoveries but also to the most revolutionary technological breakthroughs. In short, no quantum mechanics, no computer chips.

This brief book includes Flexner’s timeless 1939 essay alongside a new companion essay by Robbert Dijkgraaf, the Institute’s current director, in which he shows that Flexner’s defense of the value of “the unobstructed pursuit of useless knowledge” may be even more relevant today than it was in the early twentieth century. Dijkgraaf describes how basic research has led to major transformations in the past century and explains why it is an essential precondition of innovation and the first step in social and cultural change. He makes the case that society can achieve deeper understanding and practical progress today and tomorrow only by truly valuing and substantially funding the curiosity-driven “pursuit of useless knowledge” in both the sciences and the humanities.

Abraham Flexner (1866–1959) was the founding director of the Institute for Advanced Study, one of the world's leading institutions for basic research in the sciences and humanities. Robbert Dijkgraaf, a mathematical physicist who specializes in string theory, is director and Leon Levy Professor at the Institute for Advanced Study. A distinguished public policy adviser and passionate advocate for science and the arts, he is also the cochair of the InterAcademy Council, a global alliance of science academies, and former president of the Royal Netherlands Academy of Arts and Sciences.

"Flexner's essay needs to be reread, not just by government officials and business leaders but by scientists and voters as well."—Gillian Tett, Financial Times

"There is a timeless relevance about Flexner's words in this essay written 78 years ago."—Wan Lixin, Shanghai Daily

"[R]eaders will discover a timeless essay by Abraham Flexner written in 1939 on the Usefulness of Useless Knowledge and a companion essay . . . by [Robbert Dijkgraaf] which shows that Flexner's vision is perhaps more relevant today. . . . During recent decades, scholarship and funding for STEM education have reached a critical stage that was foreseen by Flexner. [Dijkgraaf] states that scientists and scholars have a role to play in educating the public on the value of useless knowledge."—Jean Worsley, NSTA Recommends

"The Usefulness of Useless Knowledge is a book that should be in the library of all those who undertake any manner of inquiry, be it scientific or humanistic, amateur or professional. Furthermore, it should not be read only once but turned to again and again for inspiration, for motivation, and indeed, even for comfort. For in a world so relentlessly focused on tangible achievement and commercialization, the reminder that there were, and continue to be, those in who knew and still understand the importance of unbridled curiosity to the health of the human mind and spirit is of inestimable importance."—John E. Riutta, Well-Read Naturalist

"Why read Flexner’s essay now? The answer is apparent to anyone who has associated with the modern university over the last few decades. . . . It is important to recall that the foundations of 'useful knowledge' originate, as Flexner argues both eloquently and powerfully, in the exploration of 'useless knowledge.'"—Alan Rauch, Canadian Association of University Teachers Bulletin

"Commendably well-written, Flexner’s manifesto is interesting and thought-provoking in an ample variety of ways."—Íñigo Ongay de Felipe, Science and Education

"Flexner and Dijkgraaf argue that basic research—driven by curiosity, freedom, and imagination—is a proven and essential seed for the revolutionary technologies that fuel the economy, transform society, and provide solutions for the world's problems. A thoughtful appeal for long-term thinking in a time full of short-term distractions."—Eric Schmidt, Executive Chairman of Alphabet Inc.

"These two eloquent essays are timely and timeless treasures that remind us why and how the pursuit of knowledge for its own sake has transformed humanity and human affairs. The Usefulness of Useless Knowledge is a gift to all those concerned with the world of tomorrow."—Sean B. Carroll, author of The Serengeti Rules and Brave Genius

"In essays written more than seventy years apart, the founding and current directors of Princeton's Institute for Advanced Study demonstrate how human progress has depended—quite unexpectedly—on unfettered scholarship carried out by talented, obsessively curious individuals. The time lag from their discoveries to practical benefit will be long and the path unpredictable. But here is the bottom line: as strange as it seems, humanity’s future is likely to depend on society’s greatly increased support for fundamental, seemingly ‘impractical’ research."—Bruce Alberts, University of California, San Francisco, and former editor-in-chief of Science magazine

"The Usefulness of Useless Knowledge is excellent. Dijkgraaf's essay is a remarkable piece of writing that eloquently puts Flexner's essay in historical context, revealing the influence of his vision on the twentieth century and reevaluating it in the light of the twenty-first."—Carlo Rovelli, author of Seven Brief Lessons on Physics

"Flexner's brilliant essay is as valuable today as when it was first published. And Dijkgraaf's eloquent companion essay, which admirably connects the situation facing past and present advocates of basic scientific research, is a pleasure to read. The Usefulness of Useless Knowledge will be very useful in the intense global debate over this vital topic."—Neil Turok, Director and Niels Bohr Chair, Perimeter Institute for Theoretical Physics