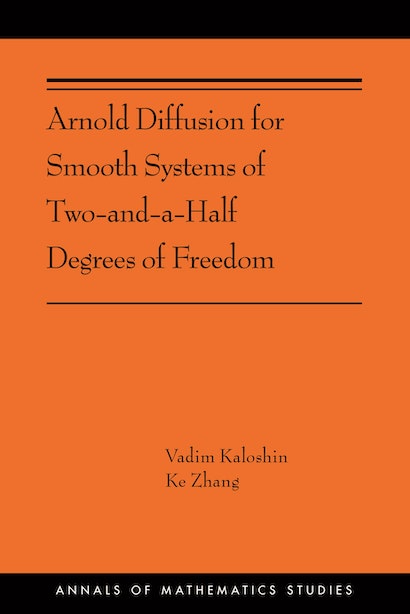 Arnold diffusion, which concerns the appearance of chaos in classical mechanics, is one of the most important problems in the fields of dynamical systems and mathematical physics. Since it was discovered by Vladimir Arnold in 1963, it has attracted the efforts of some of the most prominent researchers in mathematics. The question is whether a typical perturbation of a particular system will result in chaotic or unstable dynamical phenomena. In this groundbreaking book, Vadim Kaloshin and Ke Zhang provide the first complete proof of Arnold diffusion, demonstrating that that there is topological instability for typical perturbations of five-dimensional integrable systems (two and a half degrees of freedom).

This proof realizes a plan John Mather announced in 2003 but was unable to complete before his death. Kaloshin and Zhang follow Mather’s strategy but emphasize a more Hamiltonian approach, tying together normal forms theory, hyperbolic theory, Mather theory, and weak KAM theory. Offering a complete, clean, and modern explanation of the steps involved in the proof, and a clear account of background material, this book is designed to be accessible to students as well as researchers. The result is a critical contribution to mathematical physics and dynamical systems, especially Hamiltonian systems.