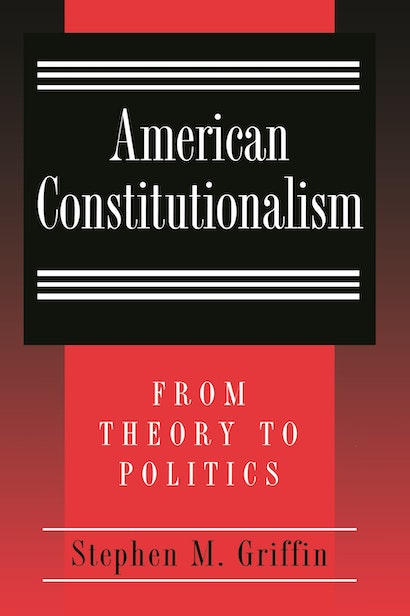 Despite the outpouring of works on constitutional theory in the past several decades, no general introduction to the field has been available. Stephen Griffin provides here an original contribution to American constitutional theory in the form of a short, lucid introduction to the subject for scholars and an informed lay audience. He surveys in an unpolemical way the theoretical issues raised by judicial practice in the United States over the past three centuries, particularly since the Warren Court, and locates both theory and practices that have inspired dispute among jurists and scholars in historical context. At the same time he advances an argument about the distinctive nature of our American constitutionalism, regarding it as an instance of the interpenetration of law and politics.

Stephen M. Griffin is Professor of Law at Tulane University.

"[As] Stephen Griffin lucidly argues, the court has never managed to follow a consistent interpretative approach for long. . . . What cleverly emerges from Mr. Griffin's account is a view of the court not as the final arbiter on constitutional questions, but as only one element in a tripartite system of government designed to divide power and create friction between the three branches."—The Economist

"Written with an almost astonishing mixture of concision and accessibility, Griffin's book should be of interest to the informed general reader as well as to mature scholars."—Sanford Levinson, University of Texas, Austin