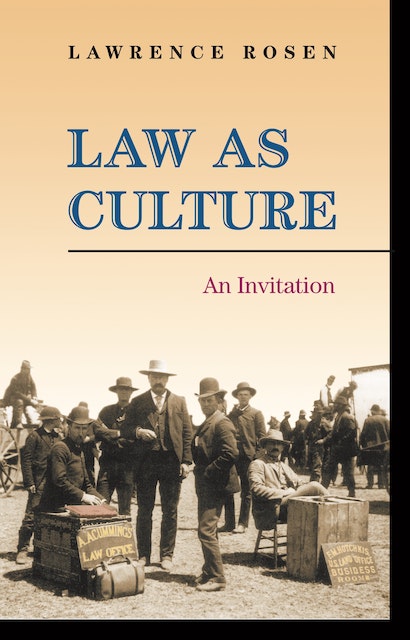 Law is integral to culture, and culture to law. Often considered a distinctive domain with strange rules and stranger language, law is actually part of a culture’s way of expressing its sense of the order of things. In Law as Culture, Lawrence Rosen invites readers to consider how the facts that are adduced in a legal forum connect to the ways in which facts are constructed in other areas of everyday life, how the processes of legal decision-making partake of the logic by which the culture as a whole is put together, and how courts, mediators, or social pressures fashion a sense of the world as consistent with common sense and social identity.


While the book explores issues comparatively, in each instance it relates them to contemporary Western experience. The development of the jury and Continental legal proceedings thus becomes a story of the development of Western ideas of the person and time; African mediation techniques become tests for the style and success of similar efforts in America and Europe; the assertion that one’s culture should be considered as an excuse for a crime becomes a challenge to the relation of cultural norms and cultural diversity.


Throughout the book, the reader is invited to approach law afresh, as a realm that is integral to every culture and as a window into the nature of culture itself.

Lawrence Rosen is William Nelson Cromwell Professor of Anthropology at Princeton University and adjunct professor of Law at Columbia University. Named to the first group of MacArthur Fellows, he is the recipient of awards from the Guggenheim Foundation and the Carnegie Corporation. Among his previous books are The Anthropology of Justice, The Justice of Islam, and The Culture of Islam.

"Lawrence Rosen exposes as false the view that law is an independent source of truth. Jurisprudence has a tendency to treat law as something given in nature, with a capacity to discern facts and attain absolute truth. This idea Rosen is determined to denounce. . . . Rosen stresses that any uncertainty tends to put the law under cultural pressure. Though Rosen sees law's main function as establishing faith in an orderly universe, he pays due attention to its many areas of uncertainty. . . . [This book] deserve[s] to be widely read."—Mary Douglas, American Interest

"[A]n important book, making it well worthwhile to take time off from thinking about law only as framing structures of domination and as the preserve of a specialist service profession."—Simon Roberts, Modern Law Review

"Using a range of cross-cultural evidence from Europe, Africa, Latin America, and North America, and employing numerous drawings and photographs, he explores how courts, mediation, and law are involved in creating a sense of the world that is consistent with common sense."—Law and Social Inquiry

"Law As Culture is a cultured reading experience in its own right and most suitable for any academic and specialist library collection."—Stuart Hannabuss, Library Review

"Law as Culture is quite appealing in enquiring further and 'elsewhere' the cultural construction of legality. The book can be recommended as a useful introduction to 'cultural studies' and anthropology and remains a beneficial reference to a wide range of academic scholars."—Esther Abin, In-Spire

"Rosen's book is remarkable not only for its breadth but because it is one of the few that identifies cross-cultural similarities and differences. The whole work is written with grace and brevity. The formal architecture of the argument is there, but not obtrusive, and the learning is broad, but not paraded."—James Gordley, University of California, Berkeley

"Rosen offers an excellent introduction to the key issues in the field and, particularly, to his own contributions to it. An eminent senior legal anthropologist, he provides a sophisticated and broad overview as well as a more intensive examination of questions of facts and evidence. The analysis is succinct and the book is well written."—Sally Merry, New York University