From one of the major figures of twentieth-century intellectual life, an incisive critique of faith and reason in the secular age 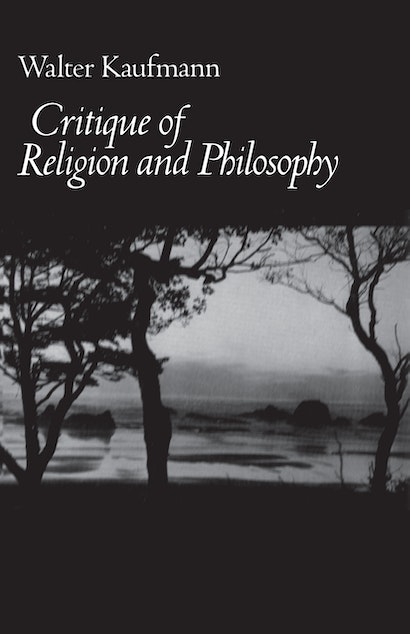 Originally published in 1958, Critique of Religion and Philosophy is Walter Kaufmann’s luminous appraisal of the orthodoxies of his day. Although he was a philosopher first and foremost, Kaufmann was not immune to the wellsprings from which religion originates, considering it to be among the most vital and radical expressions of the human intellect. In this panoramic and uniquely personal book, he tests the limits of faith and reason in our secular age. Kaufmann discusses topics ranging from positivism and existentialism to language, scripture, and Eros, and shares his views on thinkers such as Plato, Aquinas, Kant, Bultmann, Niebuhr, and Freud. Challenging, playful, and disarmingly honest, Critique of Religion and Philosophy is as bold and provocative as when it was first published.

Walter Kaufmann (1921–1980) was the Stuart Professor of Philosophy at Princeton University, where he taught for more than thirty years. His many books include Nietzsche: Philosopher, Psychologist, Antichrist and The Faith of a Heretic (both Princeton).

"The most intellectually exciting modern book on the philosophy of religion."—Anthony Quinton

“It would be hard to find a better example of modern atheistic philosophy’s love affair with religion, or a more poignant one of the effort of a modern intellectual to keep the faith while eschewing belief.”—Religious Studies Review

“Since Kaufmann’s book is not only well written, but also the only existing text combining detailed understanding, sympathy, and criticism of both existentialism and analytic philosophy, it becomes a ‘must’ for any man’s spiritual medicine cabinet. Add to this a careful critique of neo-orthodoxy, the Higher Criticism, demythologizing, mysticism, Freudian psychology, and certain aspects of Judaism and Buddhism, and the intellectual treat is obvious.”—Commentary

“Kaufmann’s discussion, which is lively, extensive in scope, and erudite, contains much to stimulate the philosopher and still more that will give the sincere Christian believer many headaches.”—Mind

“A splendid critique of Christianity. A Christian should take this book to a quiet place and enter into a genuine dialogue with it. If it does not make a better man out of him, Kaufmann can hardly be blamed.”—Theology Today