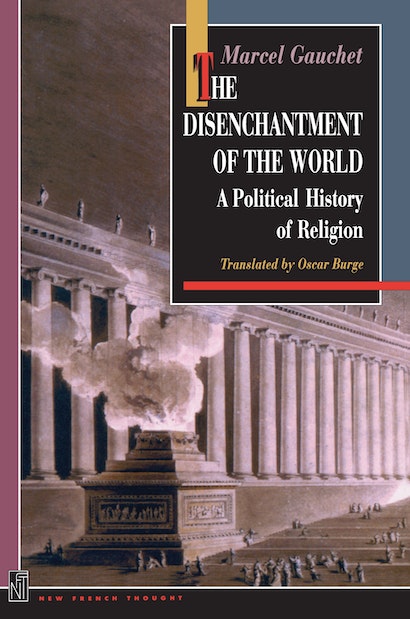 Marcel Gauchet has launched one of the most ambitious and controversial works of speculative history recently to appear, based on the contention that Christianity is “the religion of the end of religion.” In The Disenchantment of the World, Gauchet reinterprets the development of the modern west, with all its political and psychological complexities, in terms of mankind’s changing relation to religion. He views Western history as a movement away from religious society, beginning with prophetic Judaism, gaining tremendous momentum in Christianity, and eventually leading to the rise of the political state. Gauchet’s view that monotheistic religion itself was a form of social revolution is rich with implications for readers in fields across the humanities and social sciences.

Life in religious society, Gauchet reminds us, involves a very different way of being than we know in our secular age: we must imagine prehistoric times where ever-present gods controlled every aspect of daily reality, and where ancestor worship grounded life’s meaning in a far-off past. As prophecy-oriented religions shaped the concept of a single omnipotent God, one removed from the world and yet potentially knowable through prayer and reflection, human beings became increasingly free. Gauchet’s paradoxical argument is that the development of human political and psychological autonomy must be understood against the backdrop of this double movement in religious consciousness — the growth of divine power and its increasing distance from human activity.

In a fitting tribute to this passionate and brilliantly argued book, Charles Taylor offers an equally provocative foreword. Offering interpretations of key concepts proposed by Gauchet, Taylor also explores an important question: Does religion have a place in the future of Western society? The book does not close the door on religion but rather invites us to explore its socially constructive powers, which continue to shape Western politics and conceptions of the state.

Marcel Gauchet is Professor at the Ecole des Hautes Etudes en Sciences Sociales. He is the editor of Le Débat, France's most influential intellectual journal, and the author of numerous books. This current book was published in France as Le Désenchantement du monde.

"There is a stubborn kernel of truth here. It is that a liberal order may find a friend in religion because God's otherness is what makes us free: free to believe and free not to believe. Western history is the unfolding of this irony."—Jean Bethke Elshtain, The New Republic