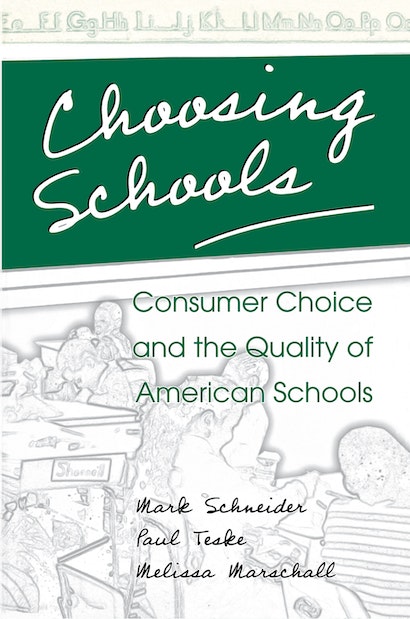 School choice seeks to create a competitive arena in which public schools will attain academic excellence, encourage individual student performance, and achieve social balance. In debating the feasibility of this market approach to improving school systems, analysts have focused primarily on schools as suppliers of education, but an important question remains: Will parents be able to function as “smart consumers” on behalf of their children? Here a highly respected team of social scientists provides extensive empirical evidence on how parents currently do make these choices. Drawn from four different types of school districts in New York City and suburban New Jersey, their findings not only stress the importance of parental decision-making and involvement to school performance but also clarify the issues of school choice in ways that bring much-needed balance to the ongoing debate.


The authors analyze what parents value in education, how much they know about schools, how well they can match what they say they want in schools with what their children get, how satisfied they are with their children’s schools, and how their involvement in the schools is affected by the opportunity to choose. They discover, most notably, that low-income parents value education as much as, if not more than, high-income parents, but do not have access to the same quality of school information. This problem comes under sensitive, thorough scrutiny as do a host of other important topics, from school performance to segregation to children at risk of being left behind.

"[A] very comprehensive volume. . . . The reader will be stimulated by the depth of analyses and the originality of the interpretations. . . . Clearly, this book will be the standard departure point for further study on informing school choice."—Henry M. Levin, Urban Affairs Review

"This timely, thoughtful, and useful guide, which clearly favors educational choice as a solution to the many challenges facing American schools today, should be read by those on both sides of the debate."—Library Journal

"A rich . . . interesting book. . . . Choosing Schools is relentlessly fair in its efforts to stay true to the data."—Jeffrey R. Henig, Journal of Politics

"Choosing Schools is a valuable contribution to the highly contentious, emotionally charged debate about school choice. Schneider, Teske, and Marschall have written a careful, reasonable, balanced and fair assessment of the evidence. Their quietly persuasive book deserves a wide readership."—Diane Ravitch, former Assistant Secretary of Education in the U.S. Department of Education and author of The Troubled Crusade: American Education, 1945-1980

"The authors' careful and judicious reading of their evidence will be greatly appreciated by those who are frustrated by the selective and inflated claims that more typically have dominated the school choice debate. While the published articles of these authors are familiar to those who have followed the school choice debate carefully, the integration of the various pieces into this book gives that content a sense of freshness, greater complexity, and added empirical horsepower."—Jeffrey Henig, author of Rethinking School Choice and coauthor of The Color of School Reform

"There is not much empirical evidence on how school choice programs work in practice—which is perhaps the central concern in the debate over choice, political and intellectual. This book provides interesting new evidence on a wide range of choice-related topics, and ties it together with theories from economics, social psychology, sociology, and public opinion. In so doing, it offers a firm basis for gaining perspective on the performance of school choice and judging its prospects. There is nothing like it in the literature. It is a tour de force."—Terry M. Moe, Hoover Institution and Stanford University