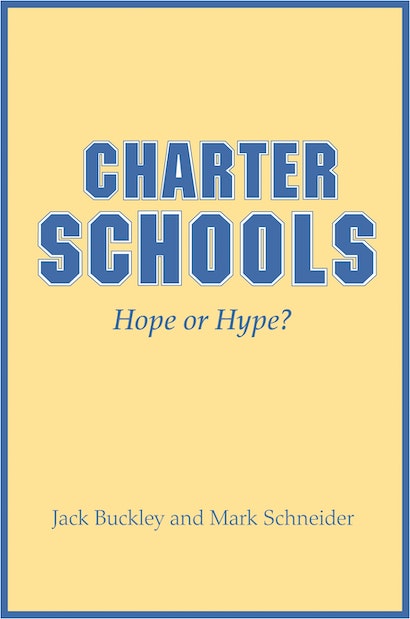 Over the past several years, privately run, publicly funded charter schools have been sold to the American public as an education alternative promising better student achievement, greater parent satisfaction, and more vibrant school communities. But are charter schools delivering on their promise? Or are they just hype as critics contend, a costly experiment that is bleeding tax dollars from public schools? In this book, Jack Buckley and Mark Schneider tackle these questions about one of the thorniest policy reforms in the nation today.


Buckley and Schneider show that charter-school students are not outperforming students in traditional public schools, that the quality of charter-school education varies widely from school to school, and that parent enthusiasm for charter schools starts out strong but fades over time. And they argue that while charter schools may meet the most basic test of sound public policy — they do no harm — the evidence suggests they all too often fall short of advocates’ claims.


With the future of charter schools — and perhaps public education as a whole — hanging in the balance, this book supports the case for holding charter schools more accountable and brings us considerably nearer to resolving this contentious debate.

Jack Buckley is associate professor of applied statistics at New York University. Mark Schneider is vice president for new educational initiatives at the American Institutes for Research and a distinguished professor of political science at the State University of New York, Stony Brook.

"It is difficult to find a book or study of charter schools these days that does not take sides in the raging argument over whether charter schools are the salvation or the scourge of our nation's schools. But Buckley and Schneider have pulled it off. Their book . . . is a useful indicator of what is going on with charters nationwide."—Jay Mathews, Washington Post

"Charter Schools: Hope or Hype? is the most complete study to date of whether charter schools are likely to improve education for inner-city children. Buckley and Schneider look at all sides of the issue in a balanced, exhaustive approach. The arguments are convincing, particularly because they are made on the basis of extensive empirical data in the District of Columbia, where almost one of five students attend charters."—Martin Carnoy, Stanford University

"This volume is more comprehensive than any on the many facets of charter-school claims and the testing of their validity. The authors provide a balance in interpretation that is rarely found on the subject of charter schools, not taking an extreme position based upon ideology, but letting the findings speak for themselves. This book makes a significant contribution to the field."—Henry M. Levin, editor of Privatizing Education

"This book promises to fill an empirical gap as the charter-school movement begins its third decade. The authors deliver an evenhanded, sophisticated investigation on how parents and students made schooling decisions. The study's statistical analyses will make a solid contribution to the educational-policy research."—Kenneth Wong, Brown University

"Buckley and Schneider have produced some of the most provocative research on charter schools. This book links the issue to a broad array of theoretical debates that have resonance beyond the community of scholars fervidly interested in the ins and outs of charter schools. The original datasets that the authors have compiled are totally unique. It took tremendous effort to pull this off."—Jeffrey R. Henig, author of Rethinking School Choice