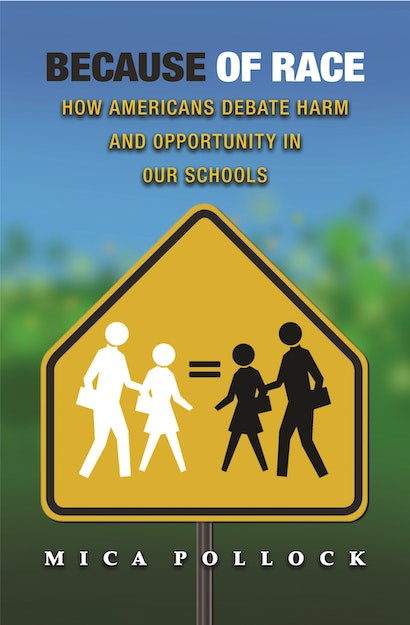 In Because of Race, Mica Pollock tackles a long-standing and fraught debate over racial inequalities in America’s schools. Which denials of opportunity experienced by students of color should be remedied? Pollock exposes raw, real-time arguments over what inequalities of opportunity based on race in our schools look like today — and what, if anything, various Americans should do about it.


Pollock encountered these debates while working at the U.S. Department of Education’s Office for Civil Rights in 1999-2001. For more than two years, she listened to hundreds of parents, advocates, educators, and federal employees talk about the educational treatment of children and youth in specific schools and districts. People debated how children were spoken to, disciplined, and ignored in both segregated and desegregated districts, and how children were afforded or denied basic resources and opportunities to learn. Pollock discusses four rebuttals that greeted demands for everyday justice for students of color inside schools and districts. She explores how debates over daily opportunity provision exposed conflicting analyses of opportunity denial and harm worth remedying. Because of Race lays bare our habits of argument and offers concrete suggestions for arguing more successfully toward equal opportunity.

Mica Pollock is an associate professor at the Harvard Graduate School of Education. She is the author of Colormute: Race Talk Dilemmas in an American School (Princeton) and the editor of Everyday Antiracism: Getting Real About Race in School (New Press).

"[This book] challenges assertions that discrimination against minority children isn't provable, shouldn't be discussed, or can't be fixed."—Education Week

"Because of Race . . . explores how everyday interactions produce racial disparities in schools. . . . Pollock argues that Americans have entered a 'new civil rights era,' . . . [and] ends her book with a passionate call for the pursuit of everyday justice."—Joe Soss, Perspectives on Politics

"A groundbreaking book which blows the cover off the country's continued shameful color-coded patterns when it comes to access to quality education."—Kam Williams, Philadelphia Sunday Sun

"Because of Race without question extends our understanding of the continued struggle for equitable schooling opportunities in the post-civil rights era. It raises important questions and data that everyone should read, especially those interested in making the nation and its public schools a safe haven of justice and democracy for all."—Christopher M. Span, Journal of American Ethnic History

"Once again Mica Pollock demonstrates her amazing understanding of the relationship between race and education. If there is one book to read to make sense of the way race permeates the schooling experience, this is it."—Gloria Ladson-Billings, University of Wisconsin-Madison

"In this thoroughly researched book about civil rights and education today, Mica Pollock demonstrates that what she calls 'everyday justice' is systematically denied and disavowed. Pollock is deeply attentive to the dilemmas, successes, and failures of all her subjects: civil rights officials, educators, and parents who try to make civil rights law function effectively. Because of Race is the best study yet of structural racism in the twenty-first century."—Howard Winant, University of California, Santa Barbara

"This book impressively incorporates a range of sources from critical legal studies and the sociology of law. Impassioned and scholarly, Because of Race is a strong book about important policy terrain."—Mitchell L. Stevens, New York University