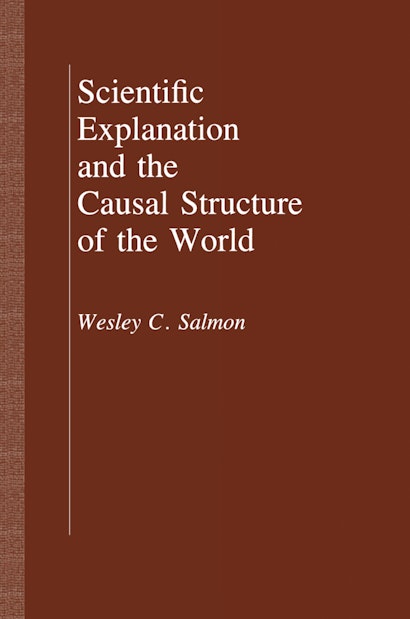 The philosophical theory of scientific explanation proposed here involves a radically new treatment of causality that accords with the pervasively statistical character of contemporary science. Wesley C. Salmon describes three fundamental conceptions of scientific explanation — the epistemic, modal, and ontic. He argues that the prevailing view (a version of the epistemic conception) is untenable and that the modal conception is scientifically out-dated. Significantly revising aspects of his earlier work, he defends a causal/mechanical theory that is a version of the ontic conception.


Professor Salmon’s theory furnishes a robust argument for scientific realism akin to the argument that convinced twentieth-century physical scientists of the existence of atoms and molecules. To do justice to such notions as irreducibly statistical laws and statistical explanation, he offers a novel account of physical randomness. The transition from the “reviewed view” of scientific explanation (that explanations are arguments) to the causal/mechanical model requires fundamental rethinking of basic explanatory concepts.

Wesley C. Salmon (1925-2001) was University Professor of Philosophy at the University of Pittsburgh from 1983 to 1999 and the author of works that include The Foundations of Scientific Inference and Statistical Explanation and Statistical Relevance.

"One of the compelling virtues of Salmon's book is that not only does it put forward new and significant propositions in the domain of the philosophy of scientific explanation, but it begins the discussion on a level of lay accessibility that invites curious general students to explore an increasingly important area of study. . . . [T]his book—in substance and in style—is a most important and much needed work."—Choice

"Salmon writes with great clarity and this book provides a comprehensive, integrated, and easily understood statement of his influential theory of scientific explanation and the causal structure of the world."—Joseph F. Hanna, Review of Metaphysics