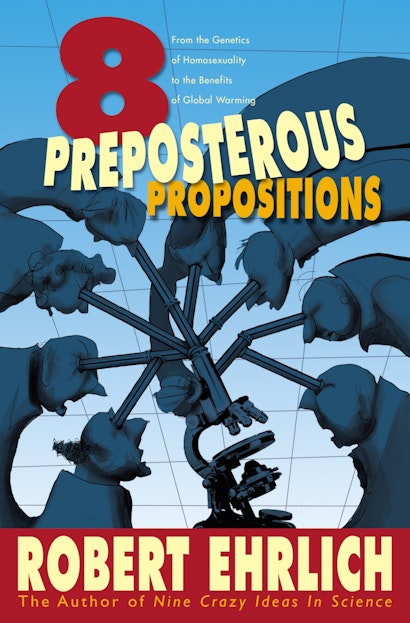 Placebo cures. Global warming. Extraterrestrial life. Psychokinesis. In a time when scientific claims can sound as strange as science fiction — and can have a profound effect on individual life or public policy — assessing the merits of a far-out, supposedly scientific idea can be as difficult as it is urgent. Into the breach between helpless gullibility and unyielding skepticism steps physicist Robert Ehrlich, with an indispensable guide to making sense of “scientific” claims. A series of case studies of some of the most controversial (and for the judging public, deeply vexing) topics in the natural and social sciences, Ehrlich’s book serves as a primer for evaluating the evidence for the sort of strange-sounding ideas that can shape our lives.


A much-anticipated follow-up to his popular Nine Crazy Ideas in Science, this book takes up issues close to readers’ everyday reality — issues such as global warming, the dangers of cholesterol, and the effectiveness of placebos — as well as questions that resonate through (and beyond) civic life: Is intelligent design a scientific alternative to evolution? Is homosexuality primarily innate? Are people getting smarter or dumber? In each case, Ehrlich shows readers how to use the tools of science to judge the accuracy of strange ideas and the trustworthiness of ubiquitous “experts.” As entertaining as it is instructive, his book will make the work of living wisely a bit easier and more reliable for scientists and nonscientists alike.

Robert Ehrlich is Professor of Physics at George Mason University and a Fellow of the American Physical Society. He is the author of twenty books, including Nine Crazy Ideas in Science: A Few Might Even Be True, Why Toast Lands Jelly-Side Down, and Turning the World Inside Out & 174 Other Simple Physics Demonstrations (all Princeton).

"Ehrlich insists that, with little homework, anyone can tool up enough mentally to discriminate between the wholly plausible and the downright dodgy."—Anjana Ahuja, The Times

"Ehrlich has set himself the heroic task, concealed beneath his flippant title, of confronting the tide of irrationality in what is in effect a manual of scientific reasoning. . . . He has dug consistently deep and marshaled the evidence in masterly style."—Walter Gratzer, Nature

"Ehrlich impressively covers a wide range of topics, and we are once again reminded of the tentative nature of many assertions made about the world. . . . I believe the vast majority of the readers of this book will learn a good deal, even if they disagree with some of Ehrlich's conclusions."—Peter Lamal, Skeptical Inquirer

"U.S. physicist Ehrlich, author of more than 20 books, here calmly and intelligently confronts what has been called a 'tide of irrationality' in modern thinking, including not just the two subjects in the subtitle, but one of great current interest: Is Intelligent Design a Scientific Alternative to Evolution? (The short answer: No.)"—H.J. Kirchhoff, Toronto Globe and Mail

"Some of Ehrlich's discussions surprised and enlightened me. Nearly all of them left me smiling in satisfaction that here was both a congenial author and an elegant, critical scientific thinker."—Dr. Richard Isaacman, Bridges

"Robert Ehrlich's Eight Preposterous Propositions, the sequel to his cleverly conceived and brilliantly executed Nine Crazy Ideas in Science, is sure to both infuriate and delight readers at the same time! If there isn't something in this book that you already agree and disagree with then you will by the time you finish it because these are among the most politically and culturally controversial ideas in all of science. I am simply staggered at both the depth and scope of Ehrlich's research, yet at the same time I am struck by how fair he is to all sides in these contentious issues. If you want to get your mind around a complex issue in a modest amount of time then Eight Preposterous Propositions is for you. Every college course in critical thinking should assign this book as a model of balanced treatment and fair mindedness."—Michael Shermer, Publisher of Skeptic magazine, monthly columnist for Scientific American, author of Why People Believe Weird Things