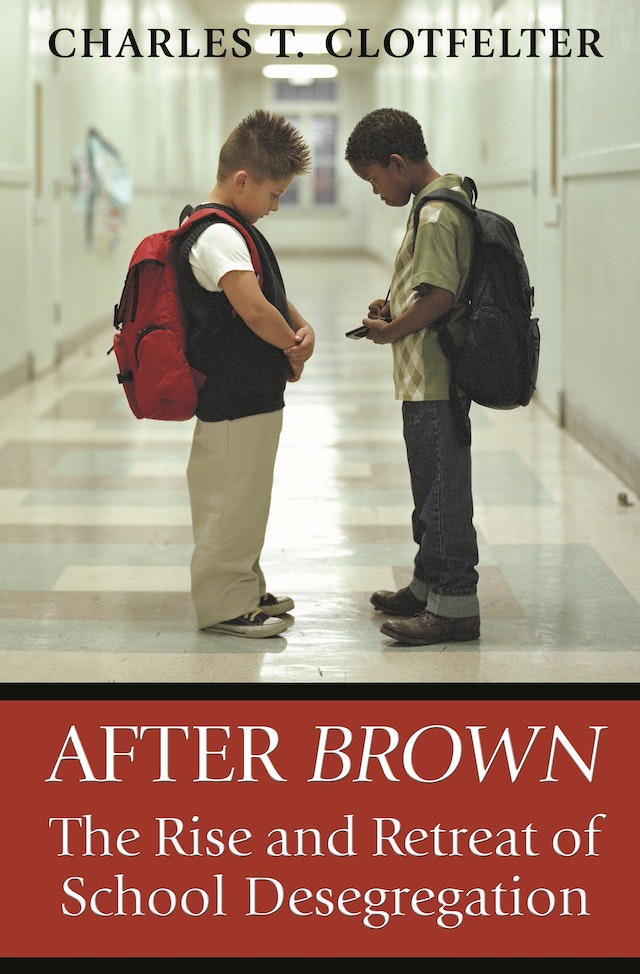 The United States Supreme Court’s 1954 landmark decision, Brown v. Board of Education, set into motion a process of desegregation that would eventually transform American public schools. This book provides a comprehensive and up-to-date assessment of how Brown’s most visible effect — contact between students of different racial groups — has changed over the fifty years since the decision.


Using both published and unpublished data on school enrollments from across the country, Charles Clotfelter uses measures of interracial contact, racial isolation, and segregation to chronicle the changes. He goes beyond previous studies by drawing on heretofore unanalyzed enrollment data covering the first decade after Brown, calculating segregation for metropolitan areas rather than just school districts, accounting for private schools, presenting recent information on segregation within schools, and measuring segregation in college enrollment.


Two main conclusions emerge. First, interracial contact in American schools and colleges increased markedly over the period, with the most dramatic changes occurring in the previously segregated South. Second, despite this change, four main factors prevented even larger increases: white reluctance to accept racially mixed schools, the multiplicity of options for avoiding such schools, the willingness of local officials to accommodate the wishes of reluctant whites, and the eventual loss of will on the part of those who had been the strongest protagonists in the push for desegregation. Thus decreases in segregation within districts were partially offset by growing disparities between districts and by selected increases in private school enrollment.

Charles T. Clotfelter is Z. Smith Reynolds Professor of Public Policy and Professor of Economics and Law at Duke University. He is also a Research Associate of the National Bureau of Economic Research. His books include Buying the Best: Cost Escalation in Elite Higher Education (Princeton).

"[A] richly instructive 'arithmetical history' of how educational integration waxed and then waned in the years after Brown."—David J. Garrow, The Nation

"This is an important book, with thorough analysis supported by both historical and current data. Clotfelter's angle of vision measuring the lack of interracial contact, is both insightful and informative."—Library Journal

"After Brown is an unusually comprehensive and well-documented analysis of trends in the last five decades in the levels of segregation in American education. . . . It is the most current, most comprehensive reference work available today."—John R. Logan, American Journal of Sociology

"Clotfelter presents an array of evidence showing the failure of school desegregation in the years since Brown. His angle of vision, measuring the lack of interracial contact, is both insightful and informative."—Mary Frances Berry, Geraldine Segal Professor of History, University of Pennsylvania, and Chairperson of the United States Commission on Civil Rights

"Fifty years ago, prompted by the Supreme Court's landmark Brown decision, this nation began a major policy initiative by moving to end the racial isolation of African American children in our public schools. In After Brown. Charles Clotfelter provides the invaluable service of systematically chronicling the history and assessing the impact of this initiative. Much will be written in this anniversary year on the subject of school desegregation, but Clotfelter's meticulous, balanced, and sober assessment has set a standard for rigor that is unlikely to be surpassed."—Glenn Cartman Loury, Boston University

"After Brown offers an amazing array of data on changes in segregation over generations that students of desegregation policy will use in constructing their arguments about both the past and the future of integrated education."—Gary Orfield, Harvard Graduate School of Education

"Instead of dancing around the subject as many have recently done, Clotfelter comes to the point and shows clearly how and why the decision in Brown has had such a painful and tortuous history. The skill and clarity with which he deals with the subject make everything he says quite illuminating and valuable in any effort to understand what has happened. This is must reading for anyone who wishes to follow the history of public education during the last half-century."—John Hope Franklin, James B. Duke Professor of History Emeritus, Duke University

"This is an important, clearly written book with thorough analysis not duplicated elsewhere. While there are likely to be many different books, conferences, and events surrounding the fiftieth anniversary of Brown, Clotfelter's book should become the definitive source for a large number of these."—Eric Hanushek, Hoover Institution, author of Making Schools Work

"After Brown is a valuable contribution to the quantitative study of segregation and race relations more generally. The author is an excellent writer, with an easy, straightforward style."—Robert A. Margo, Vanderbilt University, author of Race and Schooling in the South, 1880-1950