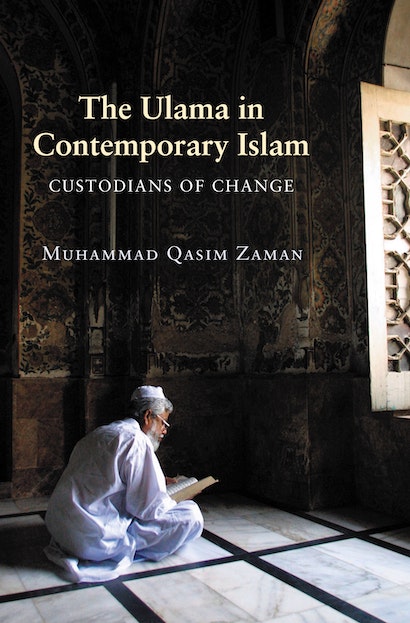 From the cleric-led Iranian revolution to the rise of the Taliban in Afghanistan, many people have been surprised by what they see as the modern reemergence of an antimodern phenomenon. This book helps account for the increasingly visible public role of traditionally educated Muslim religious scholars (the `ulama) across contemporary Muslim societies. Muhammad Qasim Zaman describes the transformations the centuries-old culture and tradition of the `ulama have undergone in the modern era — transformations that underlie the new religious and political activism of these scholars. In doing so, it provides a new foundation for the comparative study of Islam, politics, and religious change in the contemporary world.


While focusing primarily on Pakistan, Zaman takes a broad approach that considers the Taliban and the `ulama of Iran, Egypt, Saudi Arabia, India, and the southern Philippines. He shows how their religious and political discourses have evolved in often unexpected but mutually reinforcing ways to redefine and enlarge the roles the `ulama play in society. Their discourses are informed by a longstanding religious tradition, of which they see themselves as the custodians. But these discourses are equally shaped by — and contribute in significant ways to — contemporary debates in the Muslim public sphere.


This book offers the first sustained comparative perspective on the `ulama and their increasingly crucial religious and political activism. It shows how issues of religious authority are debated in contemporary Islam, how Islamic law and tradition are continuously negotiated in a rapidly changing world, and how the `ulama both react to and shape larger Islamic social trends. Introducing previously unexamined facets of religious and political thought in modern Islam, it clarifies the complex processes of religious change unfolding in the contemporary Muslim world and goes a long way toward explaining their vast social and political ramifications.

Muhammad Qasim Zaman is Robert H. Niehaus '77 Professor of Near Eastern Studies and Religion at Princeton University. He is the author of Religion and Politics under the Early Abbasids and the editor, with Robert W. Hefner, of Schooling Islam: The Culture and Politics of Modern Muslim Education (Princeton).

"A detailed, carefully researched monographic study. . . . Among other things, it demonstrates that the received image of Muslim clerics . . . as passive, unworldly reactionaries bound to an atemporal, socially withdrawn Islam is thoroughly misconceived. In many places, by now perhaps most, they are seen as members of vanguard groups in the renovation of traditional Islamic society and belief."—Clifford Geertz, The New York Review of Books

"Muhammad Qasim Zaman [writes] . . . with a magisterial command of both the internal discourses the ulama use among themselves and the dynamics of national and international developments. In addition, he builds his arguments with an extraordinarily rich mix of relevant examples, rarely seen and well referenced documentation, plus discerning support from other researchers, theorists, and commentators. . . . Zaman offers what amounts to a new working definition of the ulama that locates them not at the edge but at the center of discussions charting the course of Islam in the next century.""—Patrick Gaffney, American Historical Review

"This book, a shining example of thorough and deliberate scholarship, forces us to re-evaluate commonly held misperceptions of the religious class and madrasa education more generally. . . . With this unique volume, Qasim Zaman has finally provided something long missing in the field of Islamic studies: a comprehensive analysis of contemporary ulama as dynamic interpreters and producers of religious knowledge—and an analysis of the absolutely highest quality at that."—Peter Mandaville, International Sociology

"Muhammad Qasim Zaman's book de-stereotypes the ulama, especially the view that they are inflexible in their attitudes, generally resistant to social changes, and, as a consequence, become redundant. He clarifies that the community of religious scholars that has existed in Muslim societies for more than a thousand years has also witnessed resurgence in contemporary Muslim societies."—Mohammad Talib, Journal of Islamic Studies

"[An] excellent study. . . For those who wish to understand some of the ways Islam constitutes itself in the contemporary world, this persuasive study provides a well-argued and nuanced analysis of this aspect of contemporary Islam."—Library Journal

"A very important and scholarly work . . . this book shows how the Ulama have responded to the challenges of a rapidly changing world."—Choice

"With this book Muhammad Qasim Zaman has placed the modern 'ulama' squarely into the debates over the rise and appeal of Islamist movements. . . . The book presents a well-documented exploration of the 'ulama' in the Subcontinent, and an important comparison of the modern 'ulama' of Egypt, Saudi Arabia, Pakistan, and India."—Richard McGregor, Islamic Studies

"Muhammad Qasim Zaman dispels any notion of the homogeneity of Muslim thought in The Ulama in Contemporary Islam, a masterly study of the role of the 'ulama' in India and, after 1947, in Pakistan."—Mahmood Ibrahim, Bulletin of the Royal Institute for Inter-Faith Studies

"Long before 11 September, the `ulama were regarded as the ubiquitous agents of Islamic authority throughout the Muslim world. Yet until Muhammad Qasim Zaman, no scholar has attempted a fine-grained, comparative analysis of their multiple roles and adaptive views. This book will change the way that both scholars and observers of Islam think about contemporary Muslim societies."—Bruce Lawrence, author of Shattering the Myth

"This highly original book offers fresh insight into the role of Islamic religious scholars in the modern world. It will shape how we understand religious tradition, sectarianism, religious knowledge and its carriers, and the diverse ways in which religious arguments are created and disseminated. The book's accessible style and persuasive comparison of religious developments in South Asia with other parts of the Muslim world make it a significant port of entry for anyone wishing to understand Islamic religious tradition and the modern social and political contexts in which it is elaborated and reproduced."—Dale Eickelman, Dartmouth College

"Zaman's work is a convincing study of religious and social change. The rise of `ulama as important political and social factors in various Muslim countries has come as a surprise to many scholars, who still find phenomena such as the Taliban puzzling. This book explains this missed perspective on modernity and shows that the `ulama have not been oblivious to modern challenges."—Muhammad Khalid Masud, International Institute for the Study of Islam in the Modern World, Leiden