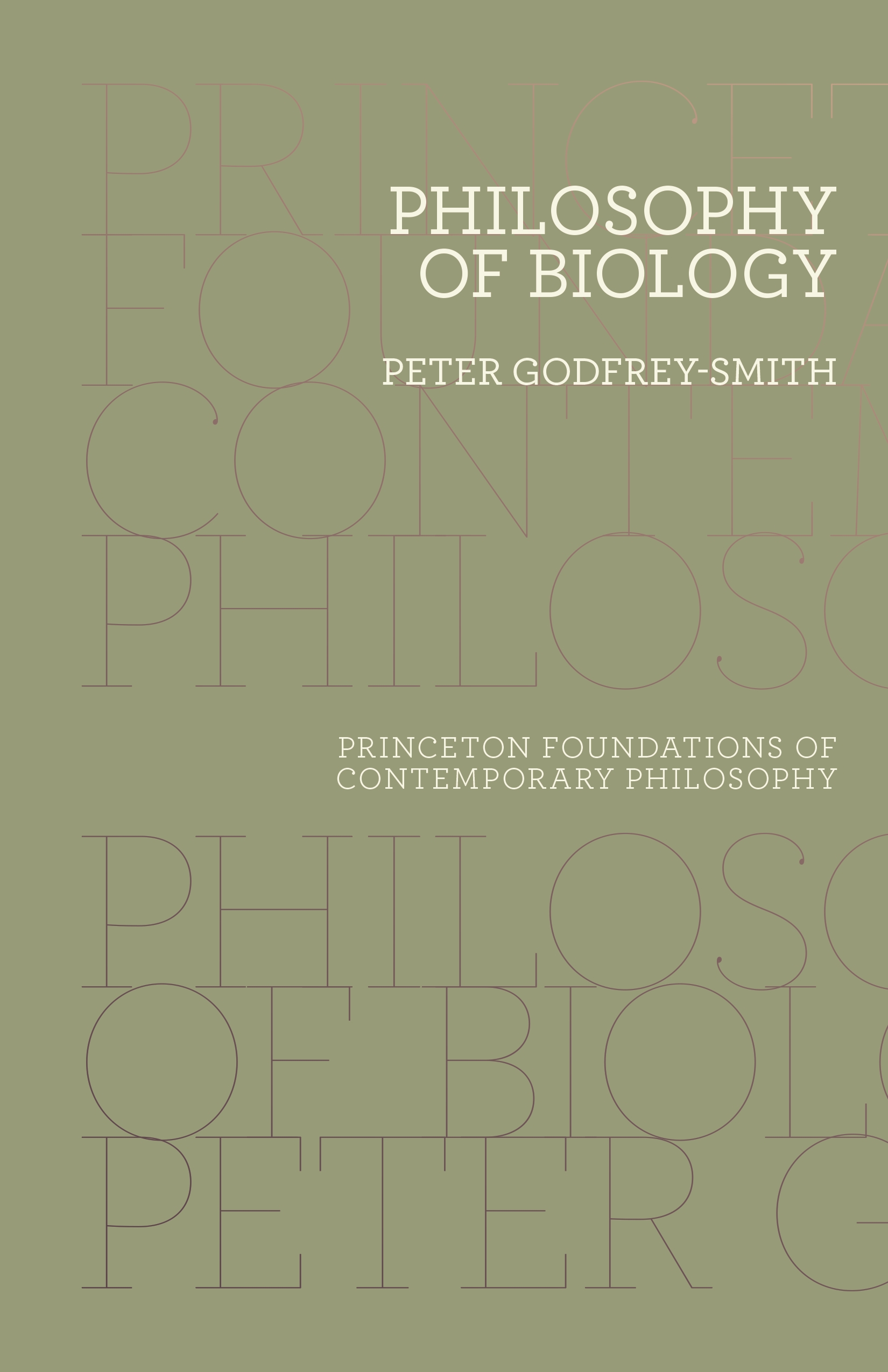 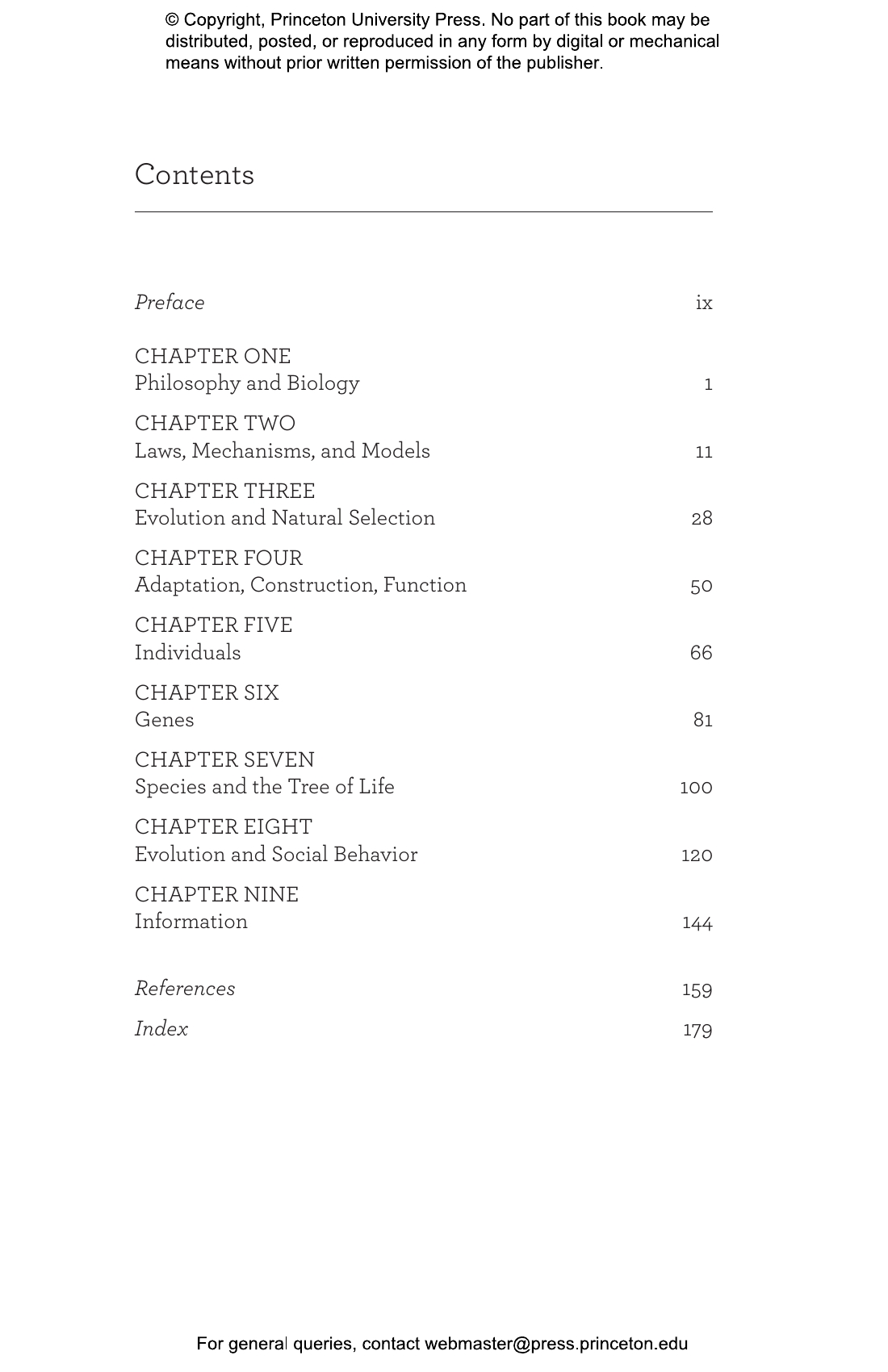 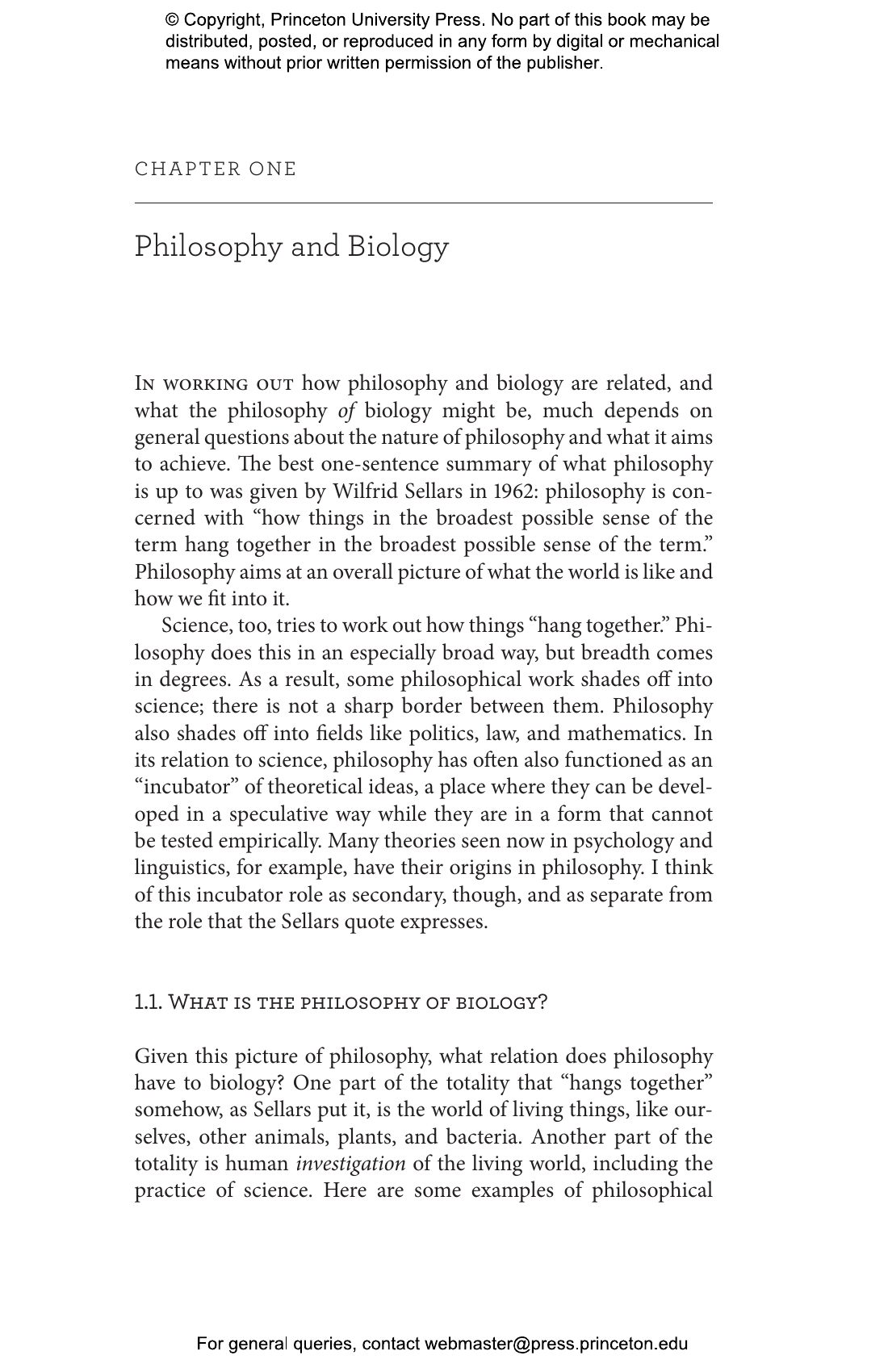 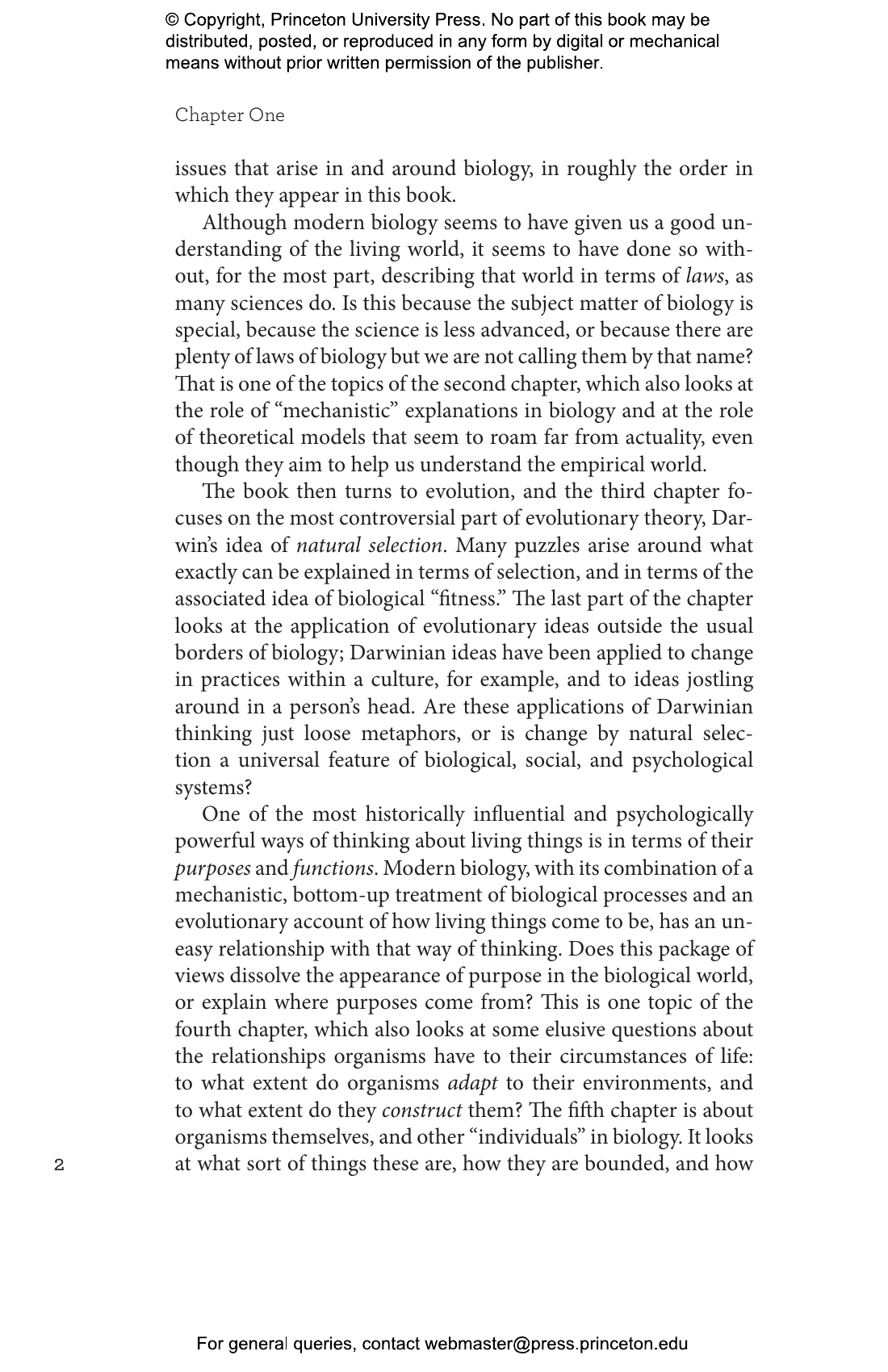 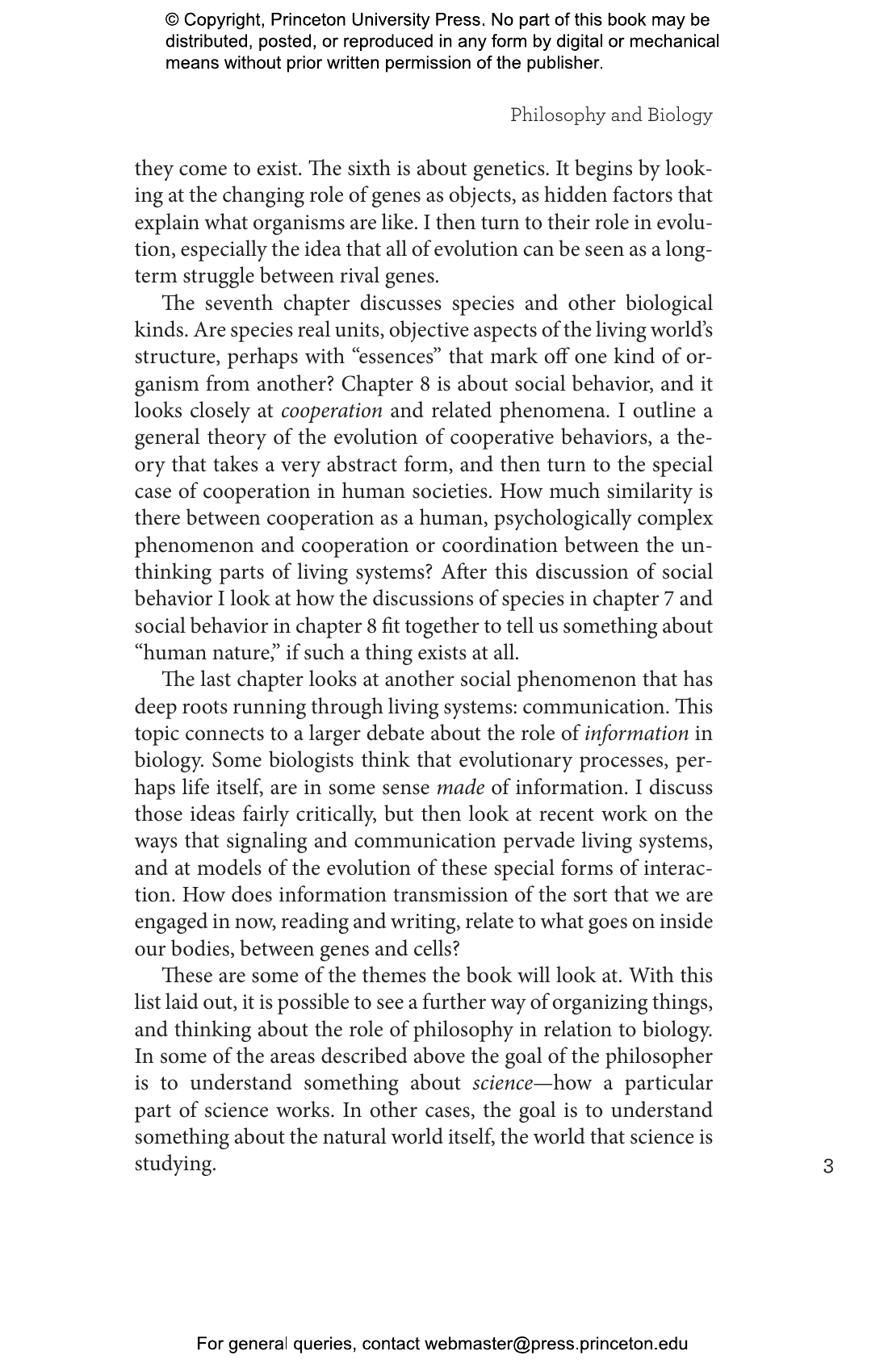 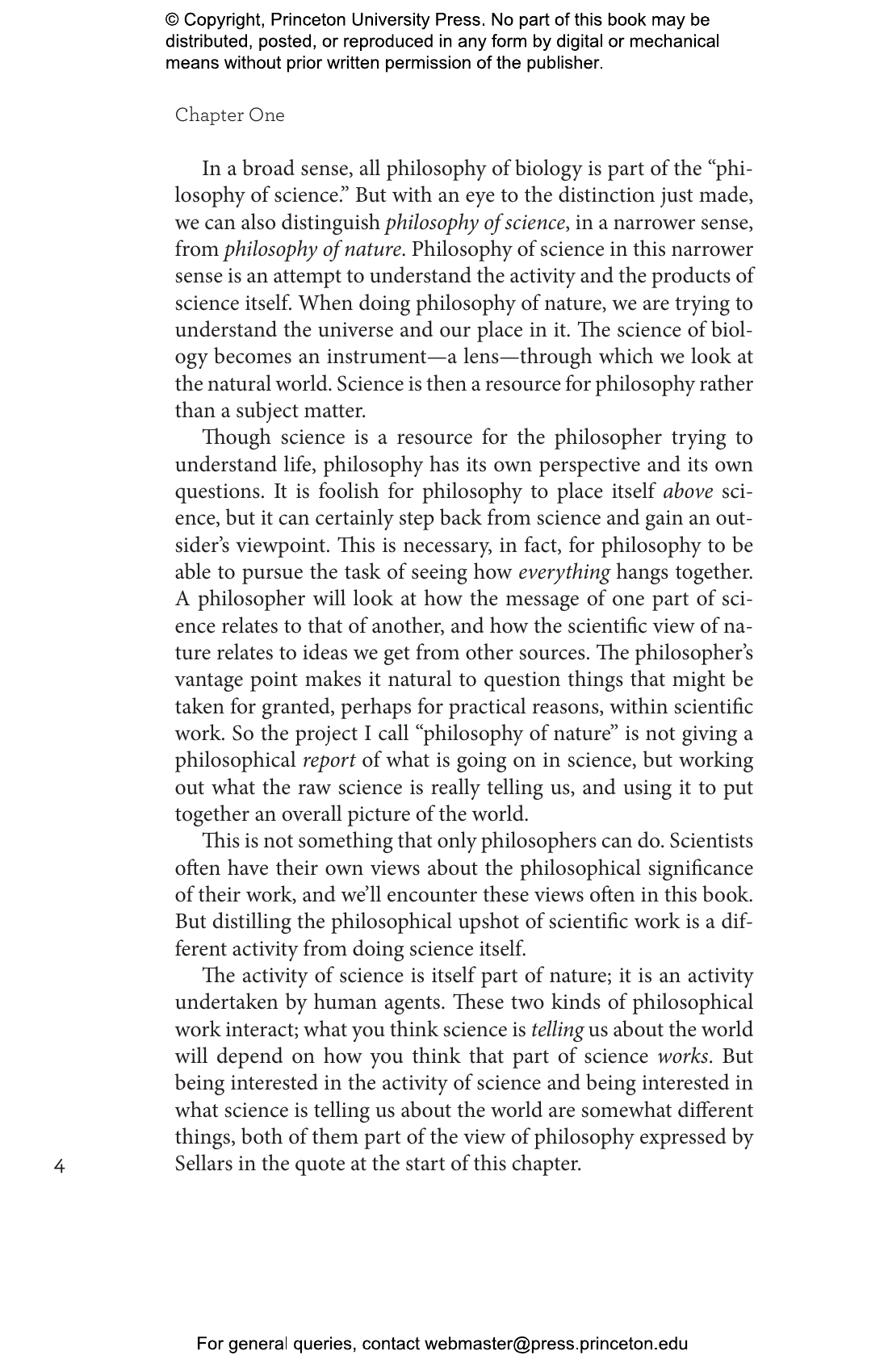 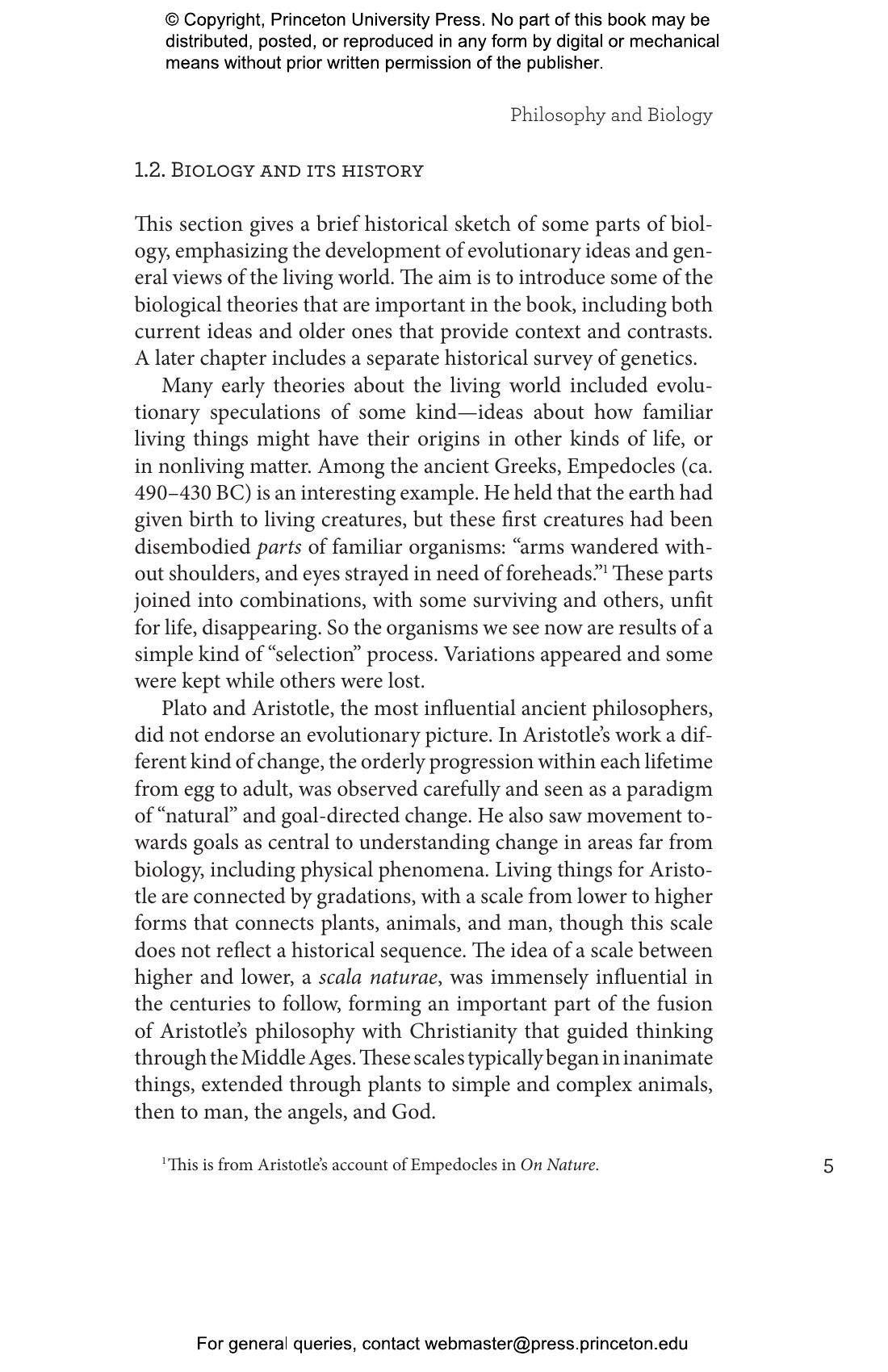 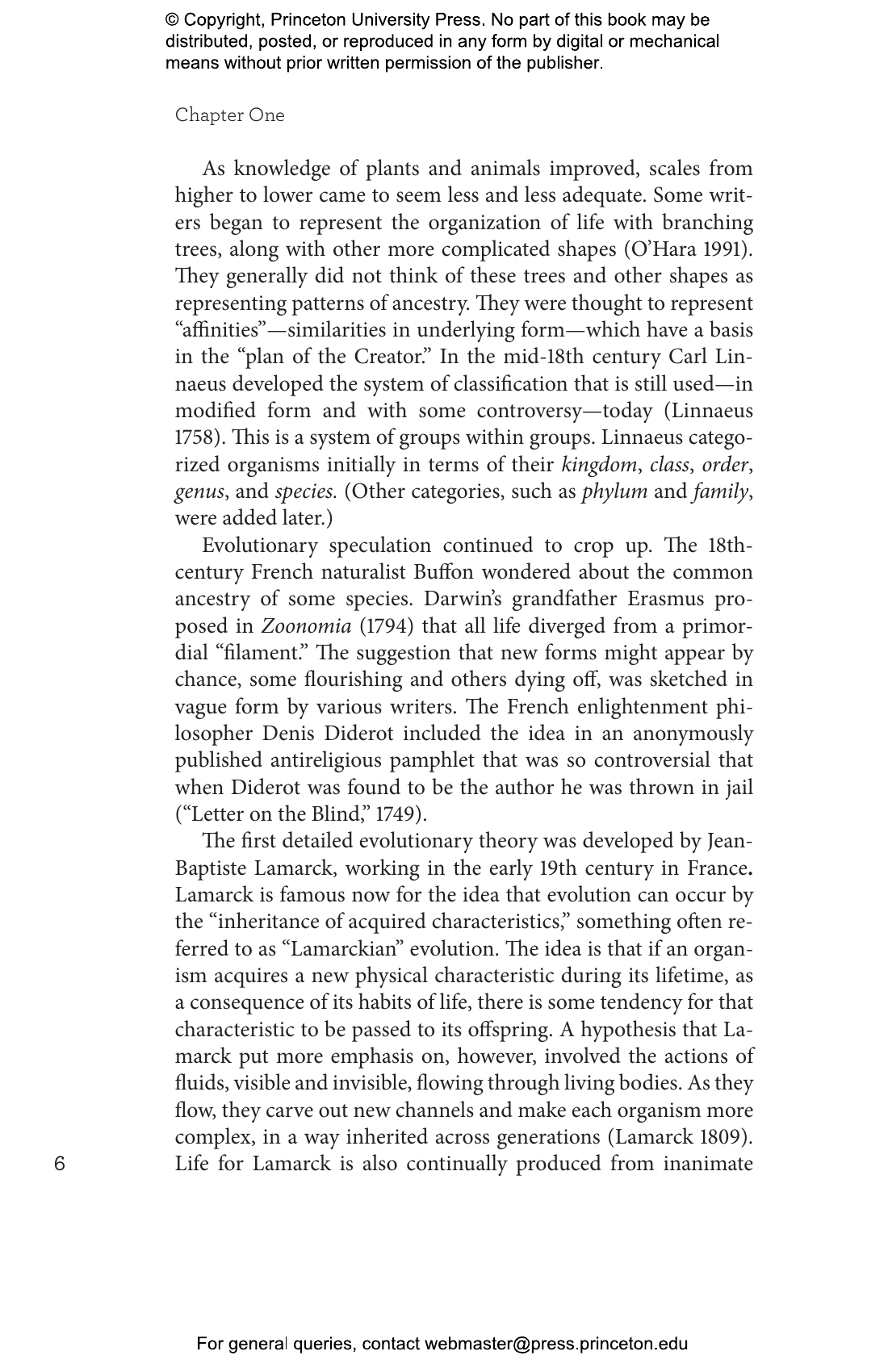 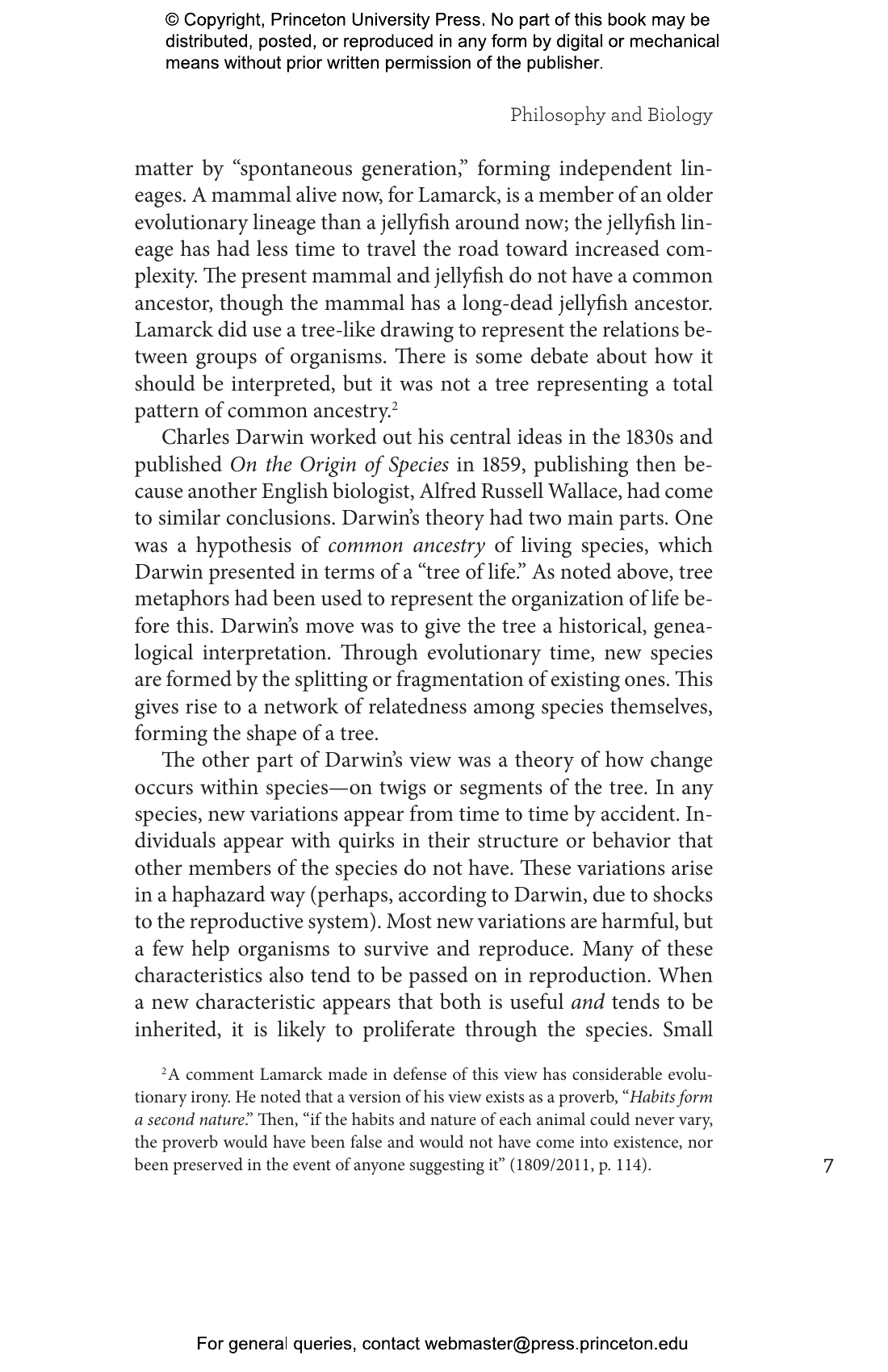 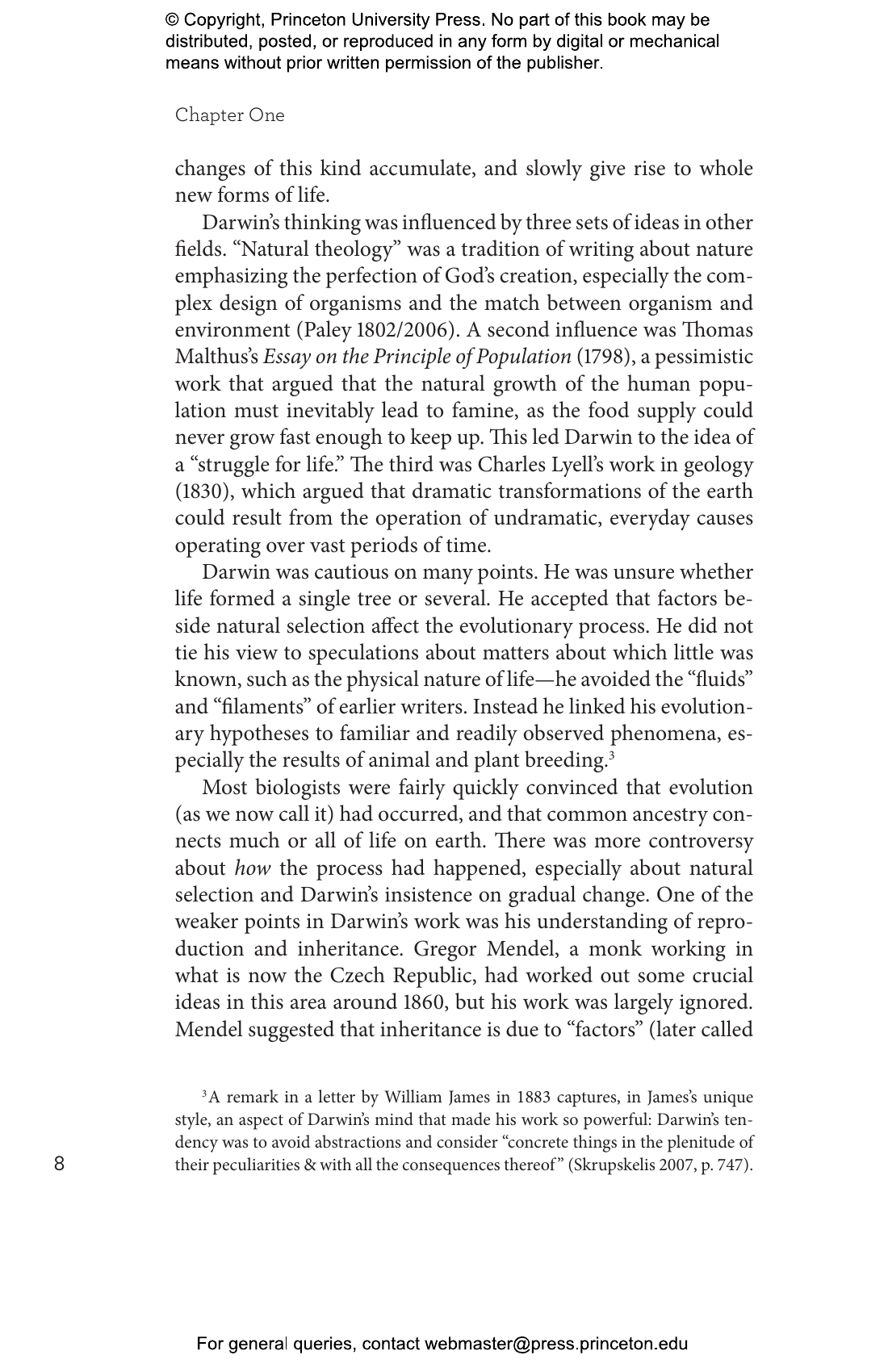 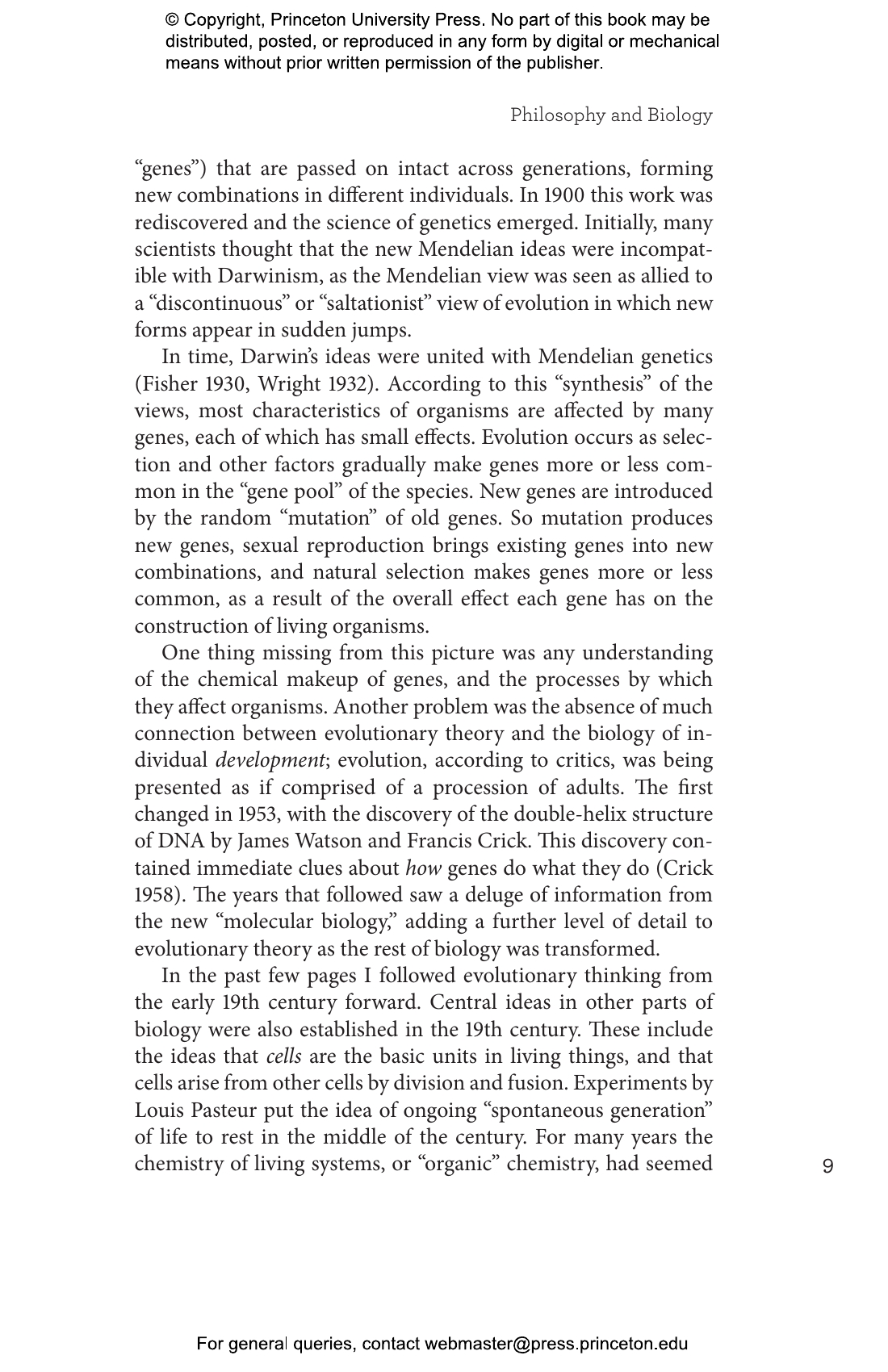 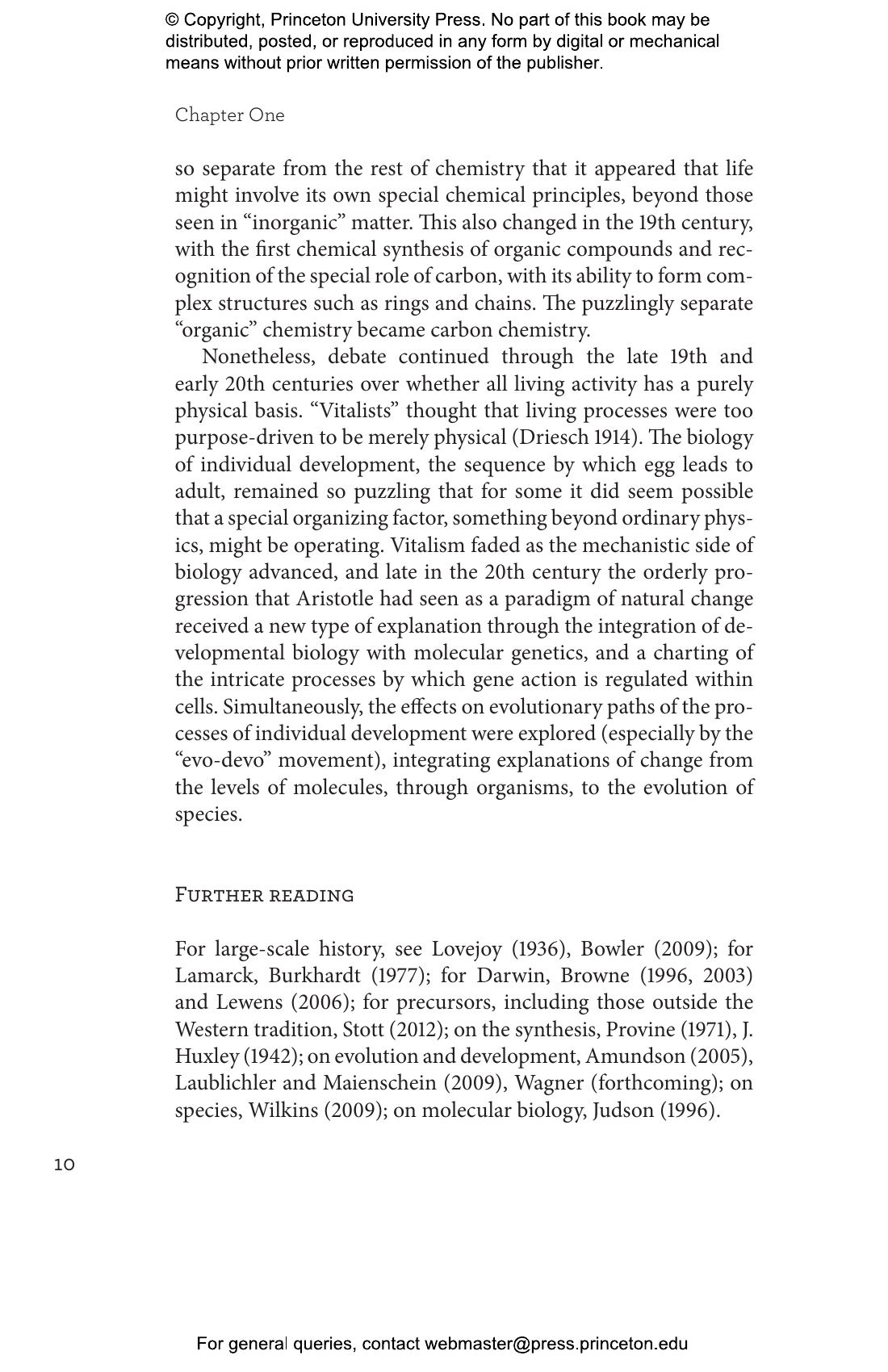 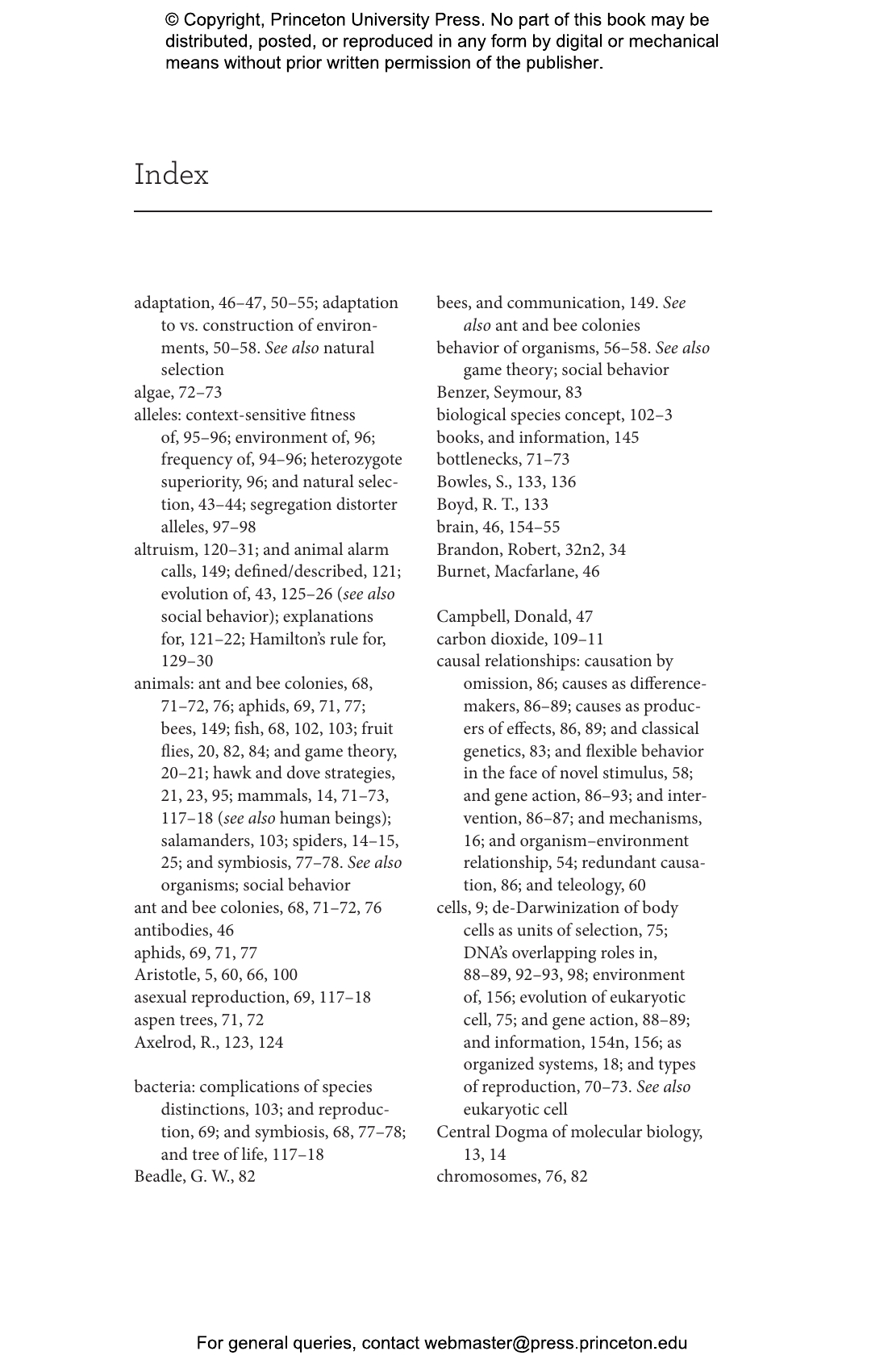 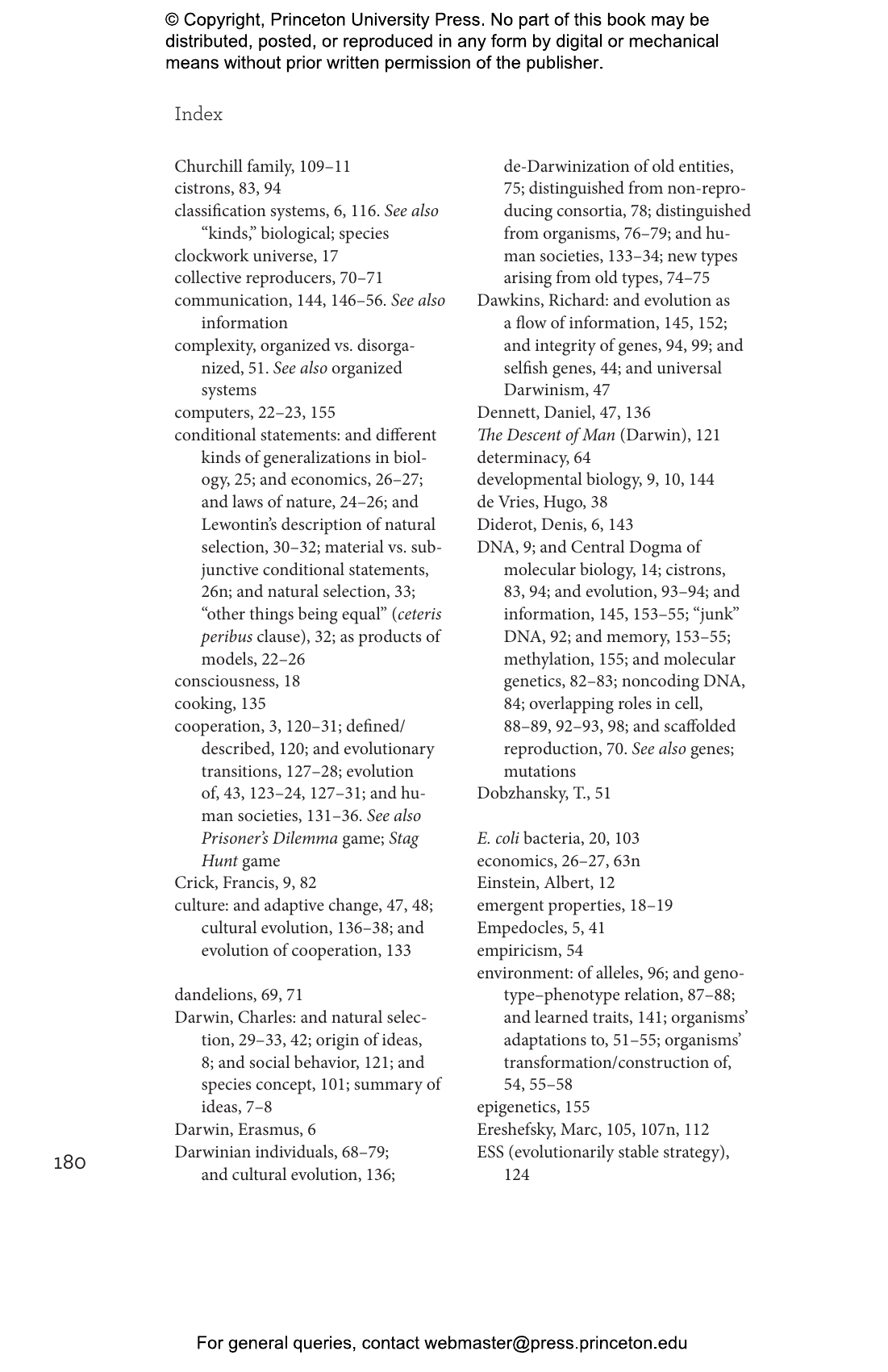 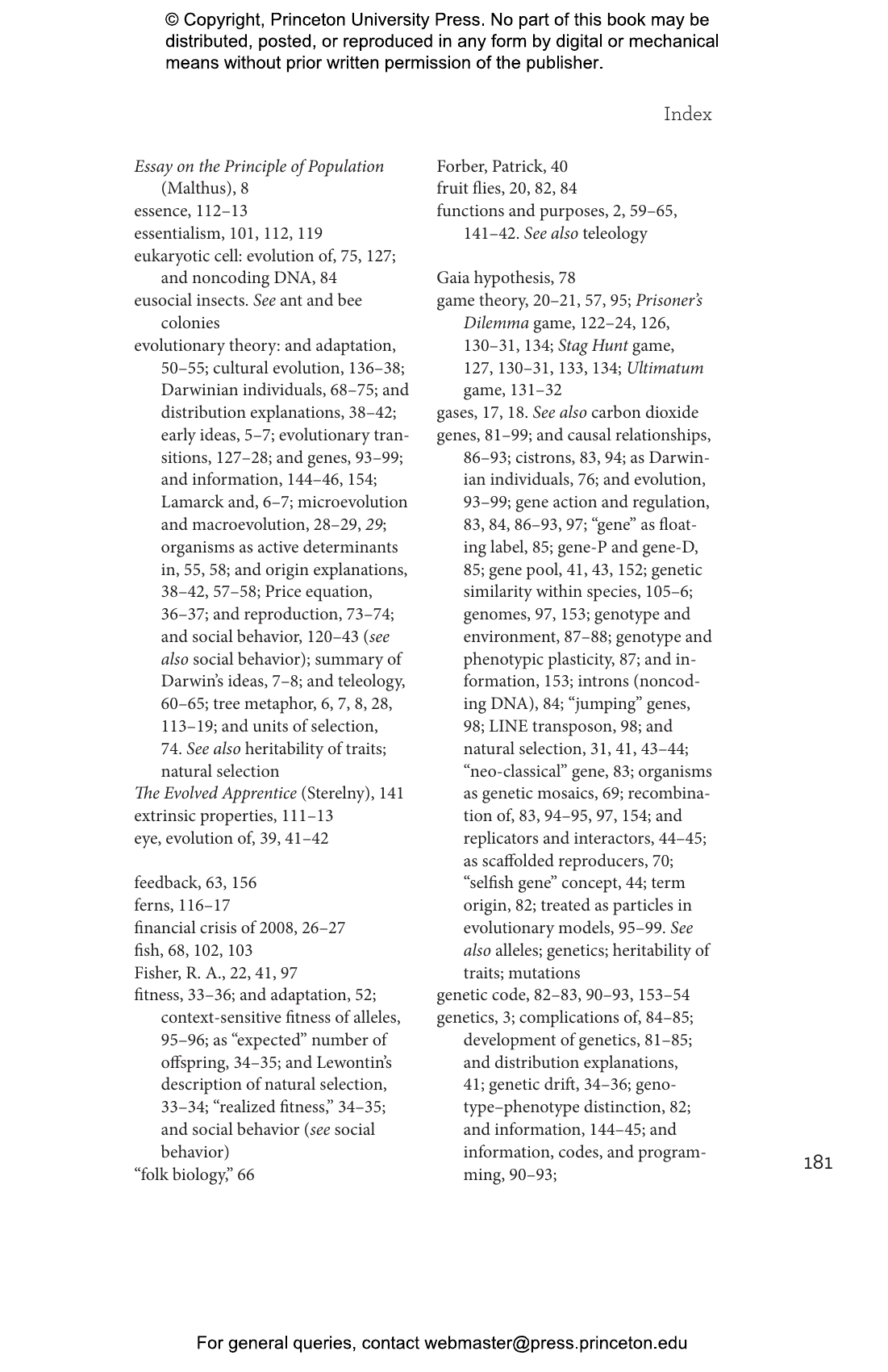 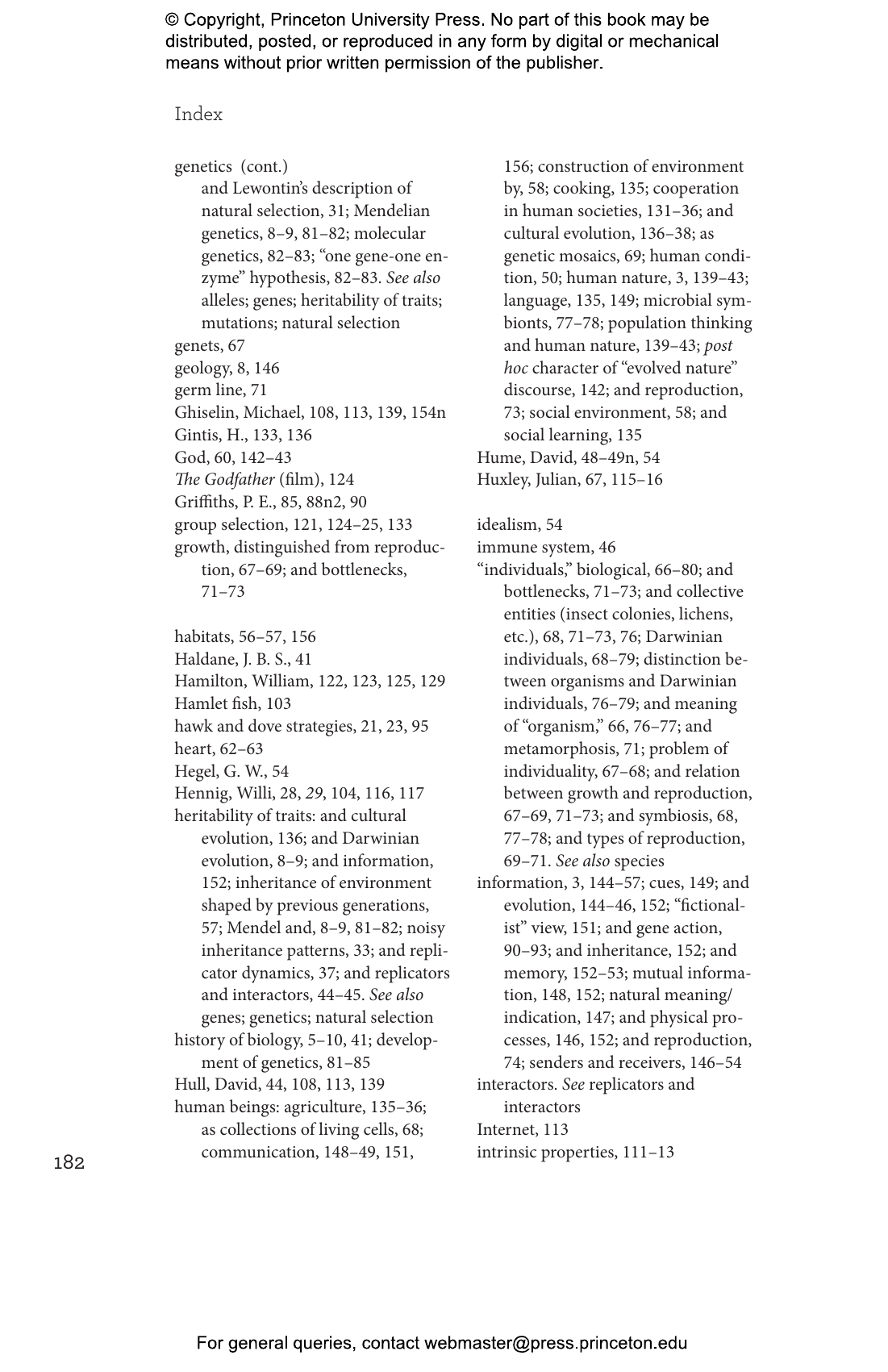 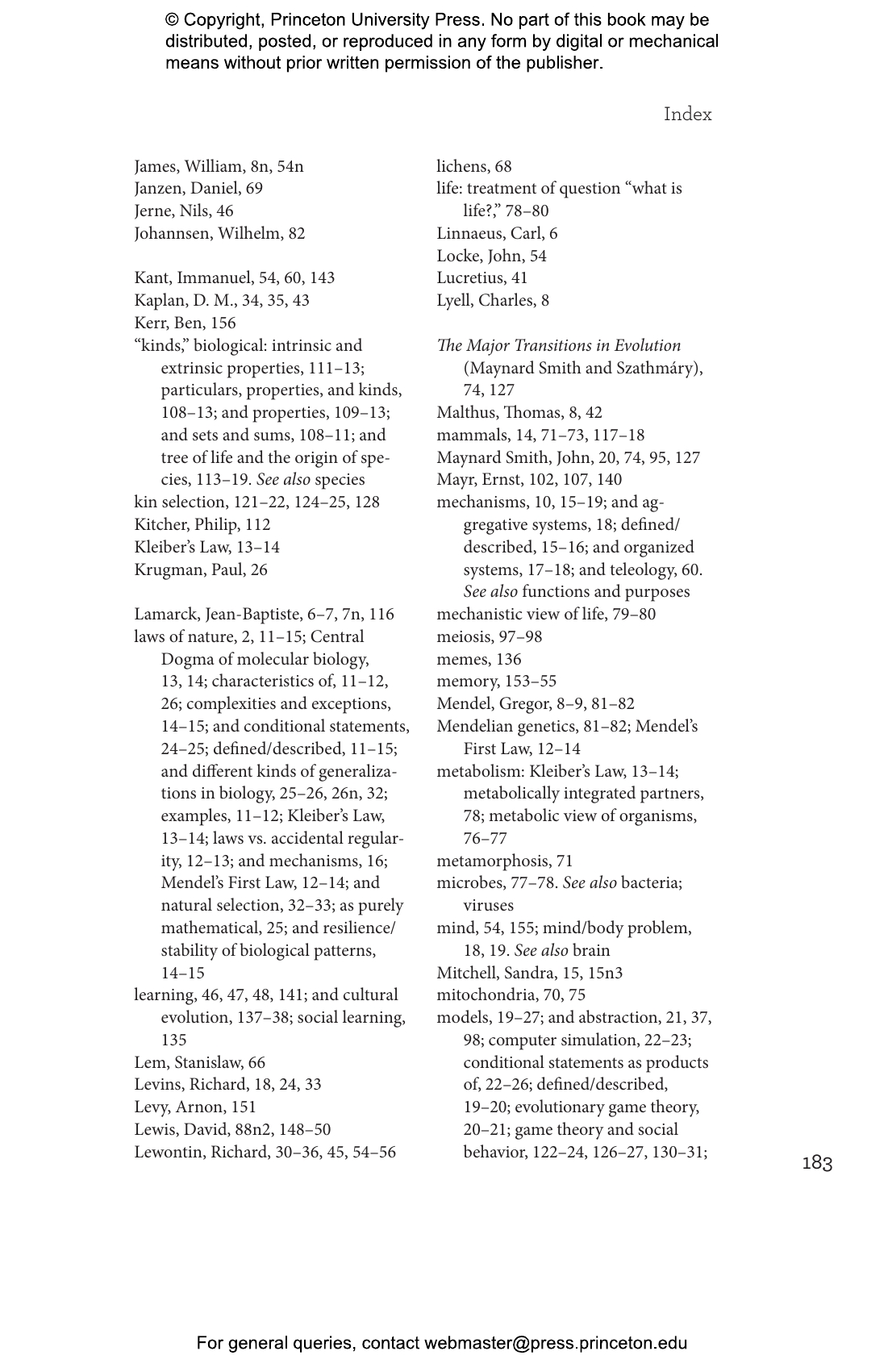 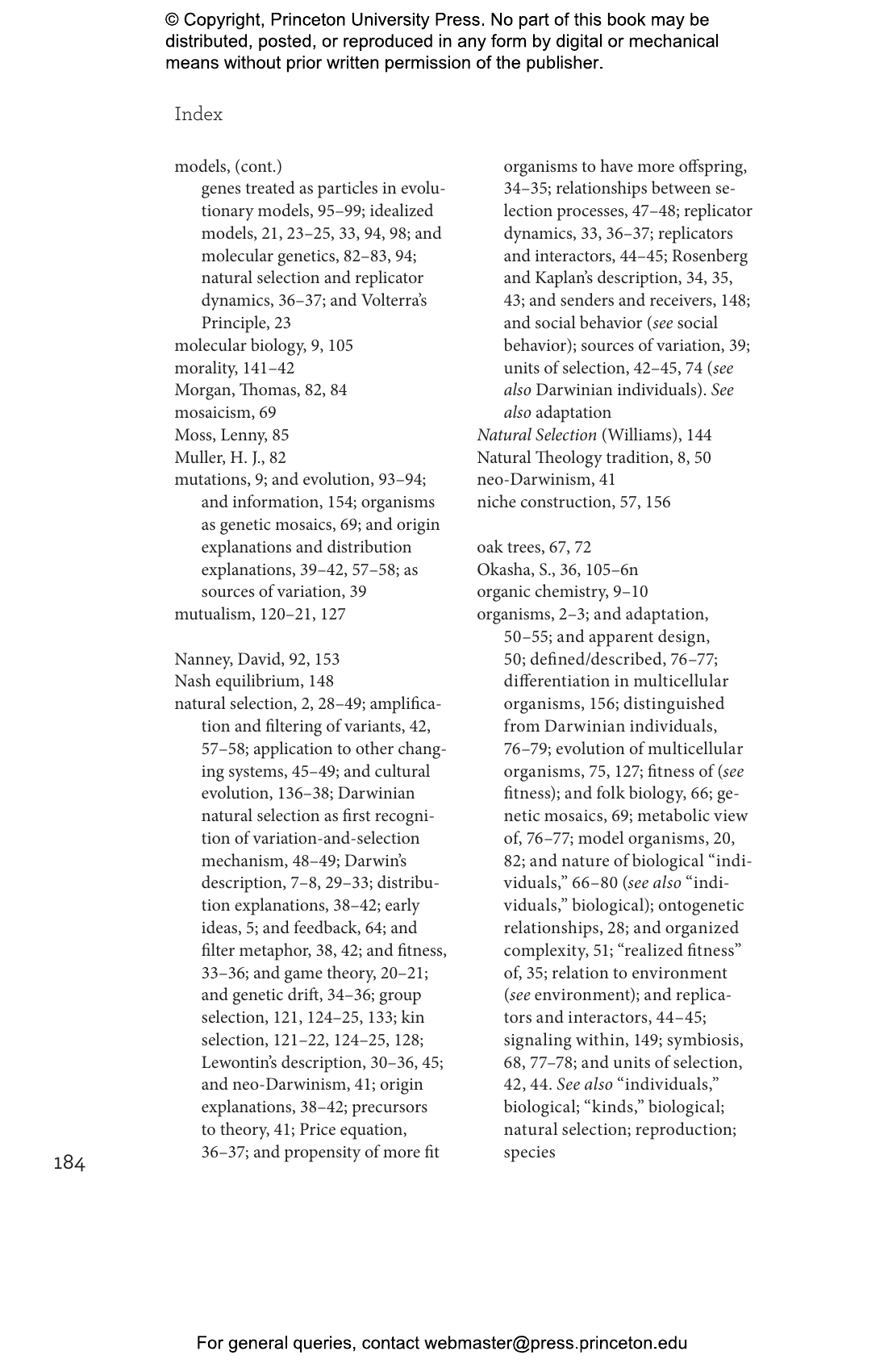 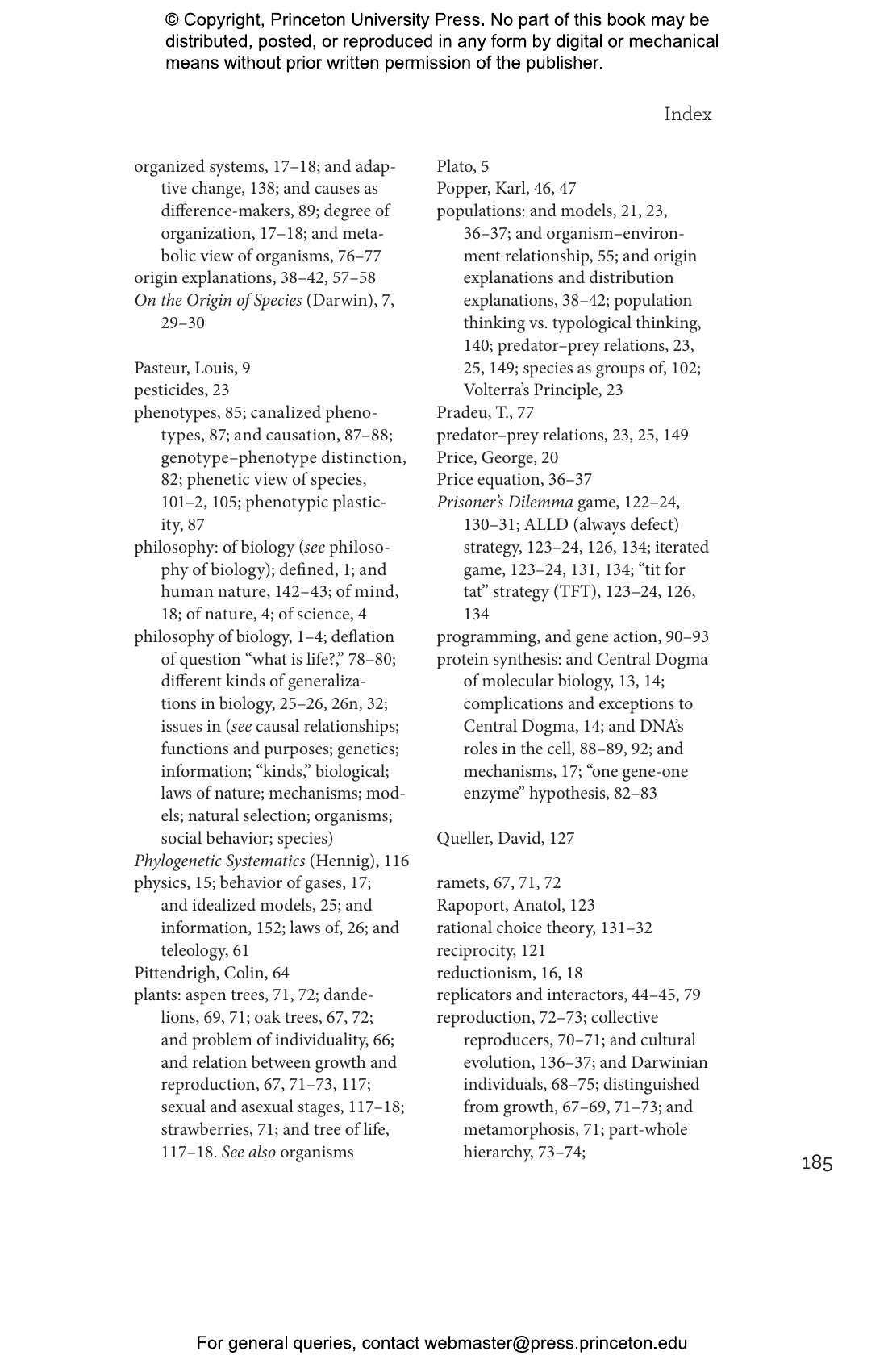 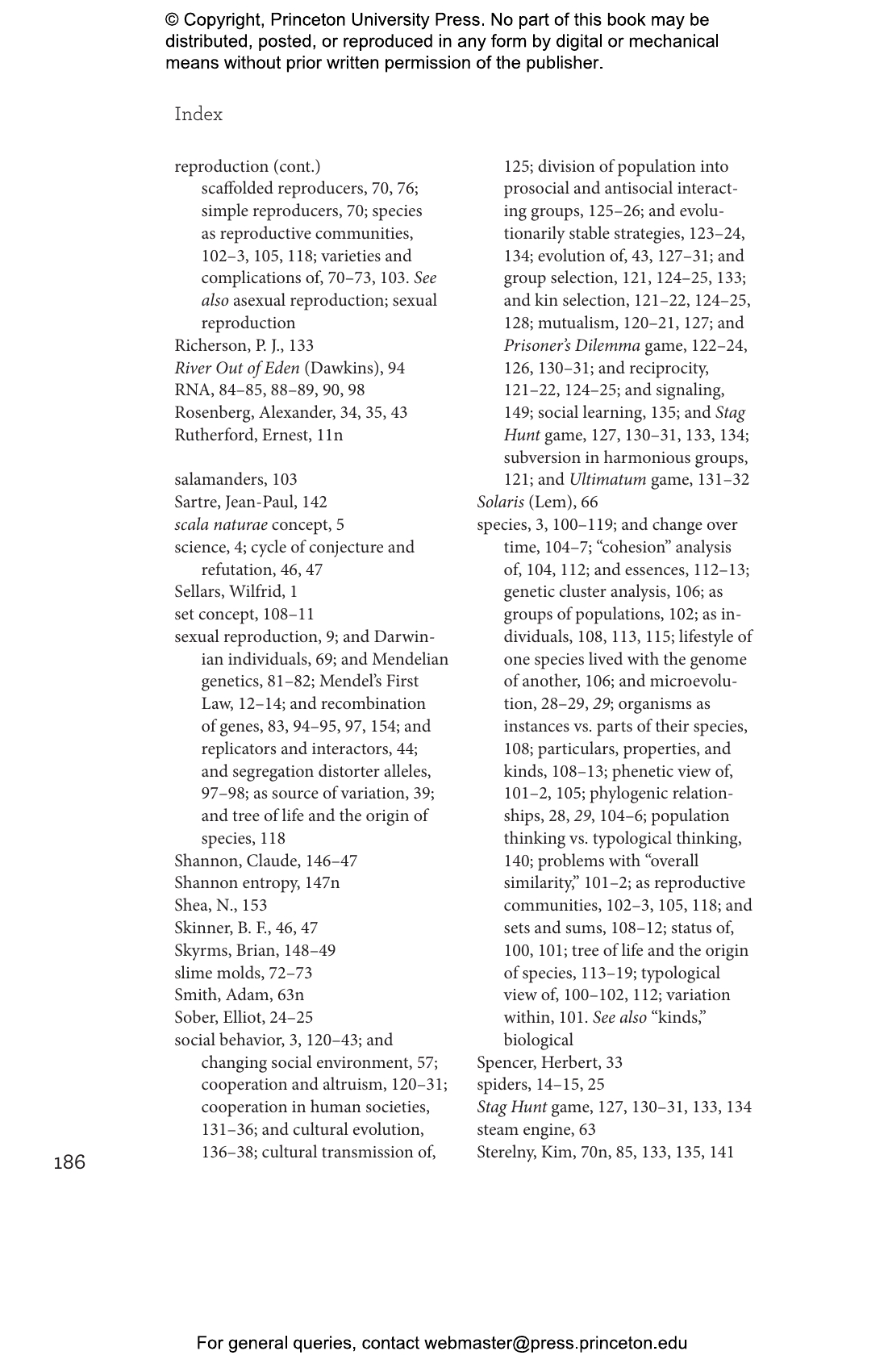 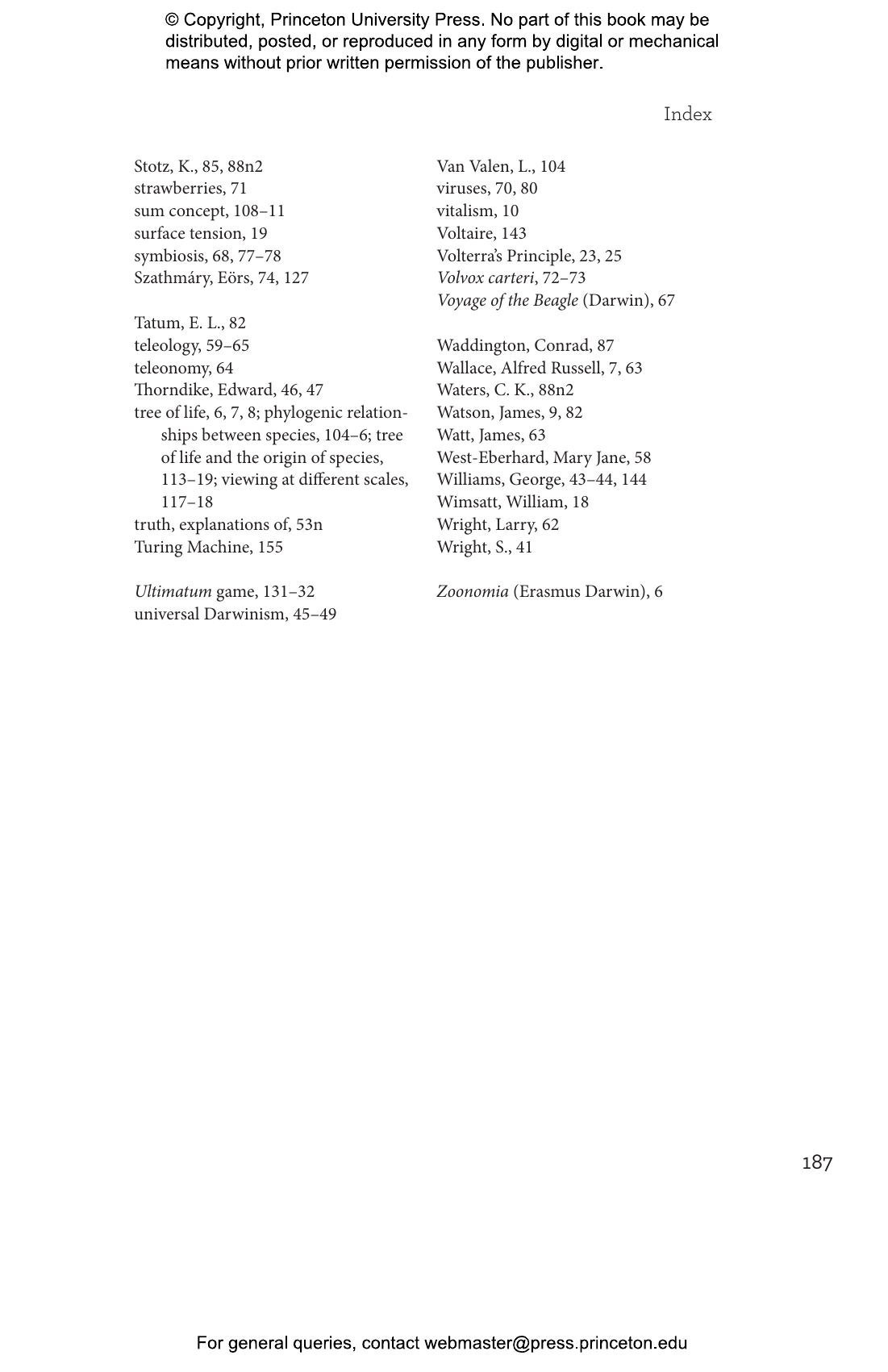 An essential introduction to the philosophy of biology 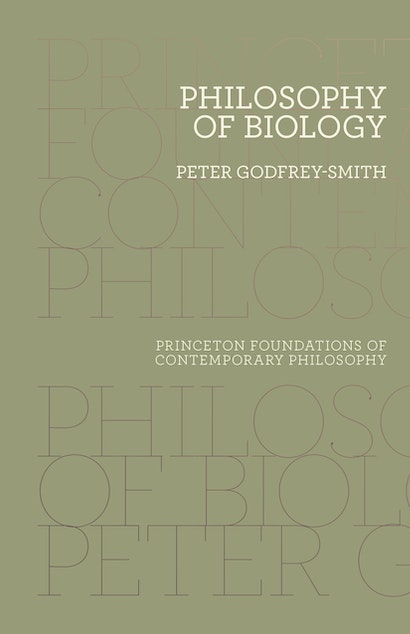 This is a concise, comprehensive, and accessible introduction to the philosophy of biology written by a leading authority on the subject. Geared to philosophers, biologists, and students of both, the book provides sophisticated and innovative coverage of the central topics and many of the latest developments in the field. Emphasizing connections between biological theories and other areas of philosophy, and carefully explaining both philosophical and biological terms, Peter Godfrey-Smith discusses the relation between philosophy and science; examines the role of laws, mechanistic explanation, and idealized models in biological theories; describes evolution by natural selection; and assesses attempts to extend Darwin’s mechanism to explain changes in ideas, culture, and other phenomena. Further topics include functions and teleology, individuality and organisms, species, the tree of life, and human nature. The book closes with detailed, cutting-edge treatments of the evolution of cooperation, of information in biology, and of the role of communication in living systems at all scales.

Authoritative and up-to-date, this is an essential guide for anyone interested in the important philosophical issues raised by the biological sciences.

Peter Godfrey-Smith is Distinguished Professor of Philosophy at the CUNY Graduate Center. He is the author of Theory and Reality: An Introduction to the Philosophy of Science and Darwinian Populations and Natural Selection.

"Tracing the history of the great debates and ideas that punctuated this specialty, Peter Godfrey-Smith offers a clear and accessible introduction, which extends to the review of its current key issues. This book will interest course philosophers and biologists, but also sociologists and psychologists, as the issues come from classic biology and philosophy."—Romaric Jannel, Liens Socio

"Peter Godfrey-Smith's Philosophy of Biology . . . [is] a great way to get up to speed on all the issues that working biologists love to debate amongst themselves. . . . [N]on-specialists should not be put off. Godfrey-Smith's style is engaging, almost conversational."—John Farrell, Forbes.com

"Here, Godfrey-Smith, a prominent and prolific scholar working in the field, delivers an elegant and stimulating analysis of key areas in the life sciences where conceptual questions arise regularly. . . . Godfrey-Smith provides an exemplar of expositional clarity and philosophical insight for those who would imitate his approach in these domains."—Choice

"[A]lthough it is too brief to be the only text for any course, it would be a perfect addition to or foundation for the reading list for many. And no practicing biologist who reads it is likely to think her time was wasted."—W. Ford Doolittle, Current Biology

"Philosophy of Biology can be recommended mainly as an excellent resource for teachers. They will find an up to date overview of important topics and can rely on the further reading sections to supplement this volume with additional material."—Christina Behme, Metapsychology

"Philosophy of Biology is a valuable addition to the introductions already out there, and one that stands out in many ways."—Joeri Witteveen, History and Philosophy of Life Sciences

"This accessible book does justice both to the subject and the reader. With admirable clarity, Peter Godfrey-Smith demonstrates why the philosophy of biology is one of the most exciting areas in contemporary philosophy."—Philip Kitcher, Columbia University

"This is a provocative and exciting look at many of the central issues in the philosophy of biology. Godfrey-Smith's book will shape the philosophical discussion for many years to come."—Michael Weisberg, University of Pennsylvania

"Clearly written and up to date, this valuable book provides a really useful overview of the philosophy of biology, as well as some distinctive arguments. Perhaps uniquely, the book succeeds in presenting its topics as clearly philosophical while engaging the relevant biology."—John Dupré, University of Exeter