An updated and comprehensive guide identifying all of the world's sharks

A Pocket Guide to Sharks of the World is the only field guide to identify, illustrate, and describe every known shark species. Its compact format makes it handy for many situations, including recognizing living species, fishery catches, or parts sold at markets. This expanded second edition presents lavish images, details on newly discovered species, and updated text throughout. The book contains useful sections on identifying shark teeth and the shark fins most commonly encountered in the fin trade, and takes a look at shark biology, ecology, and conservation. A Pocket Guide to Sharks of the World will be an essential resource and definitive reference for years to come.

Shark books to sink your teeth into

Jaws, lost sharks, and the legacy of Peter Benchley

Sarah Fowler on a love of identification guides and sharks

David A. Ebert is program director of the Pacific Shark Research Center and a research faculty member at Moss Landing Marine Laboratories. Twitter @lostsharksguy Instagram @lostsharkguy Sarah Fowler is cofounder of the Shark Trust and the European Elasmobranch Association and a member of the IUCN Shark Specialist Group. Marc Dando is a scientific illustrator and publisher whose books include Guide to the Manta and Devil Rays of the World and Sharks of the World (both Princeton). Twitter @dando_marc

"This pocket guide is perfect for those on a budget, for those wanting something they will have to hand when out and about, as well as to just marvel at the shear diversity of sharks and to learn more about how to identify them. I know it will be in my bag on every trip!"—Caroline Robertson-Brown, Scubaverse

"Stunning and a much-needed resource on these much maligned and beautiful creatures."—Roy Stewart, British Naturalists Association

Praise for the previous edition:“This well-organized, well-written guide is ideal for scholars, professionals, and enthusiasts.”—Library Journal

“Ebert, Fowler, and Dando deserve to be congratulated. They have created an ideal guidebook that contains the essential information for species identification and, most important, superbly illustrates each species in color.”—Choice

“A Pocket Guide to Sharks of the World is a great addition to the library of both the armchair traveler, like me, who rarely travels, and the intrepid traveler, who is rarely at home.”—Gabriel Thoumi, Monga Bay

“This is a great book to show that there is much more than the myths of great white sharks attacking swimmers. . . . Everything you need to know about these sea creatures is in this guide.”—Dave Lewis, Birds from Behind Blog

Sharks of the World 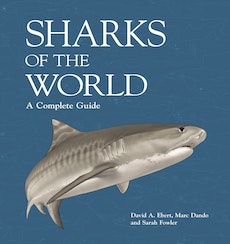 David A. Ebert, Marc Dando, and Sarah Fowler
Field Guide to Sharks, Rays & Chimaeras of Europe and the Mediterranean 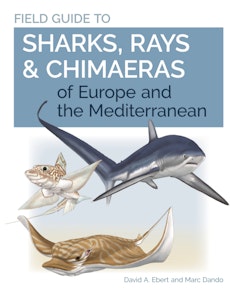 David A. Ebert and Marc Dando