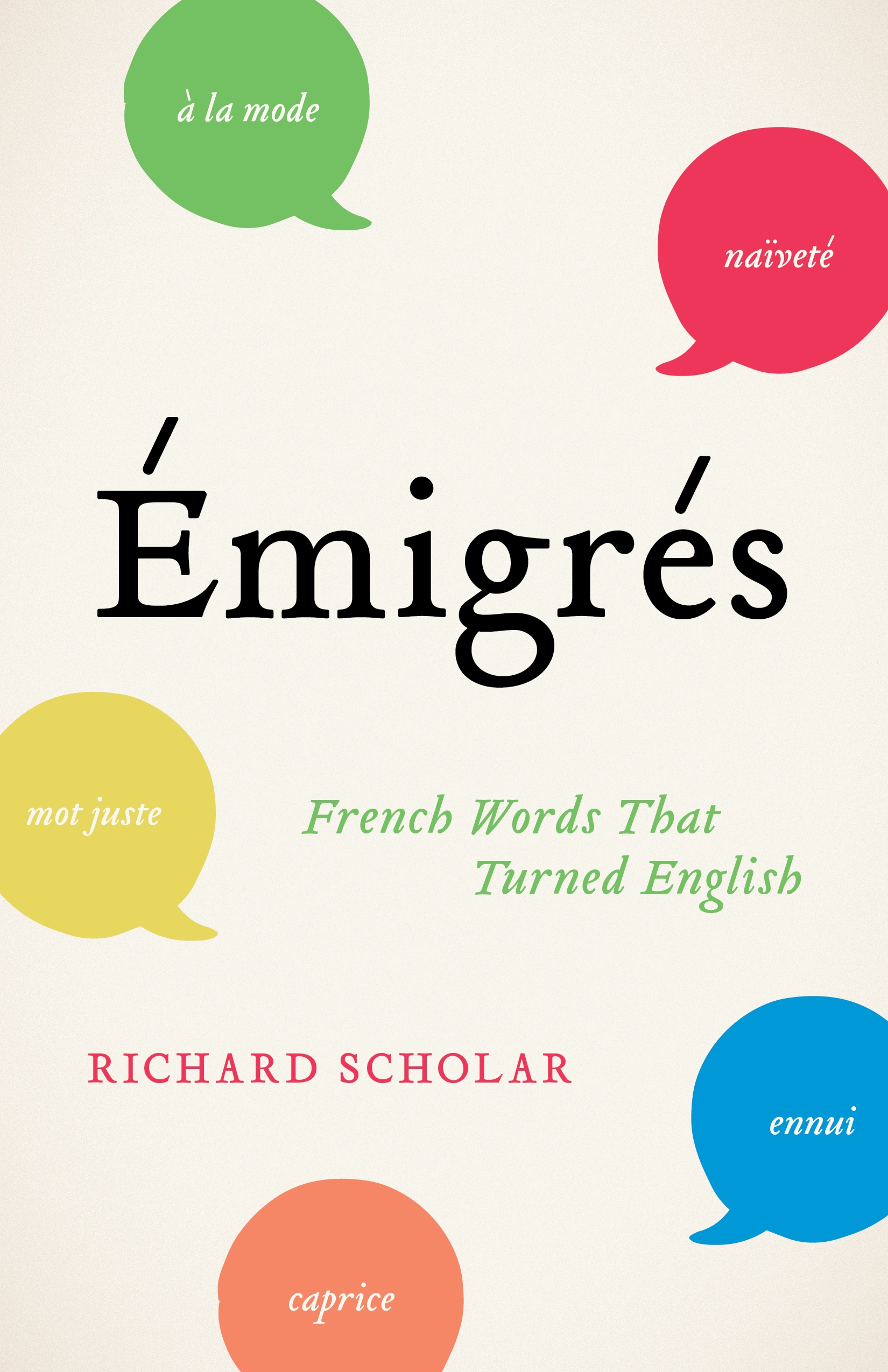 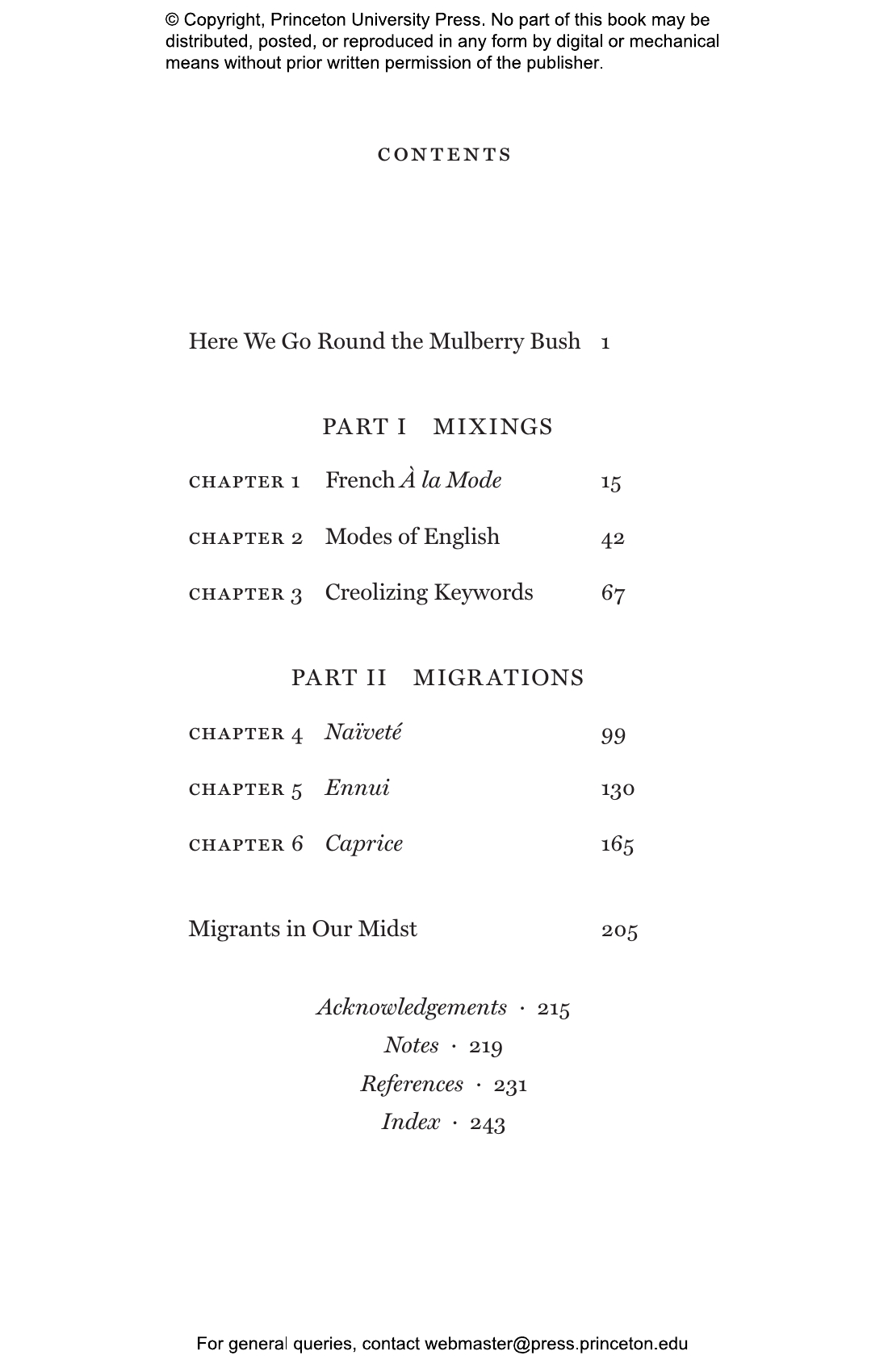 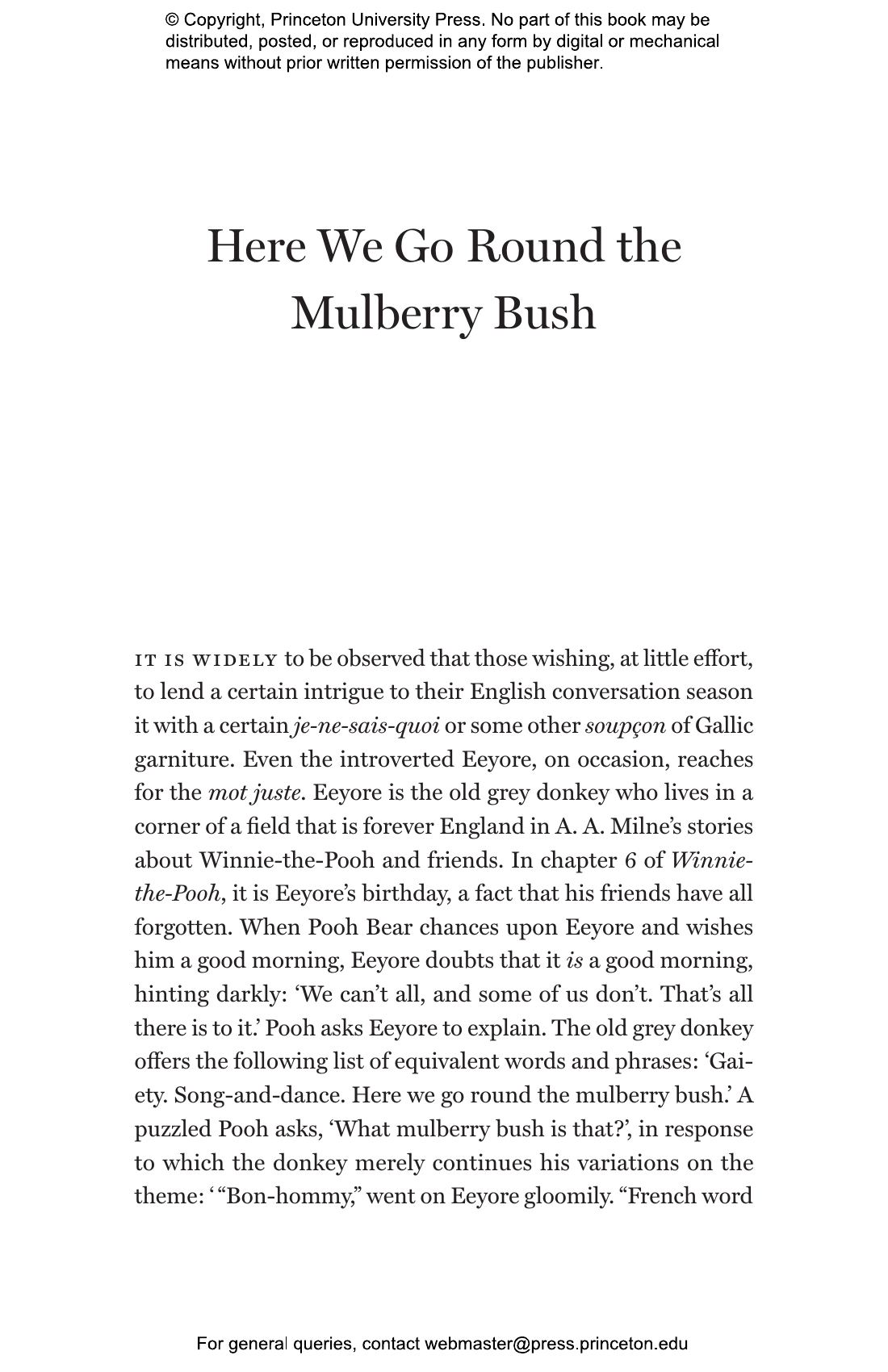 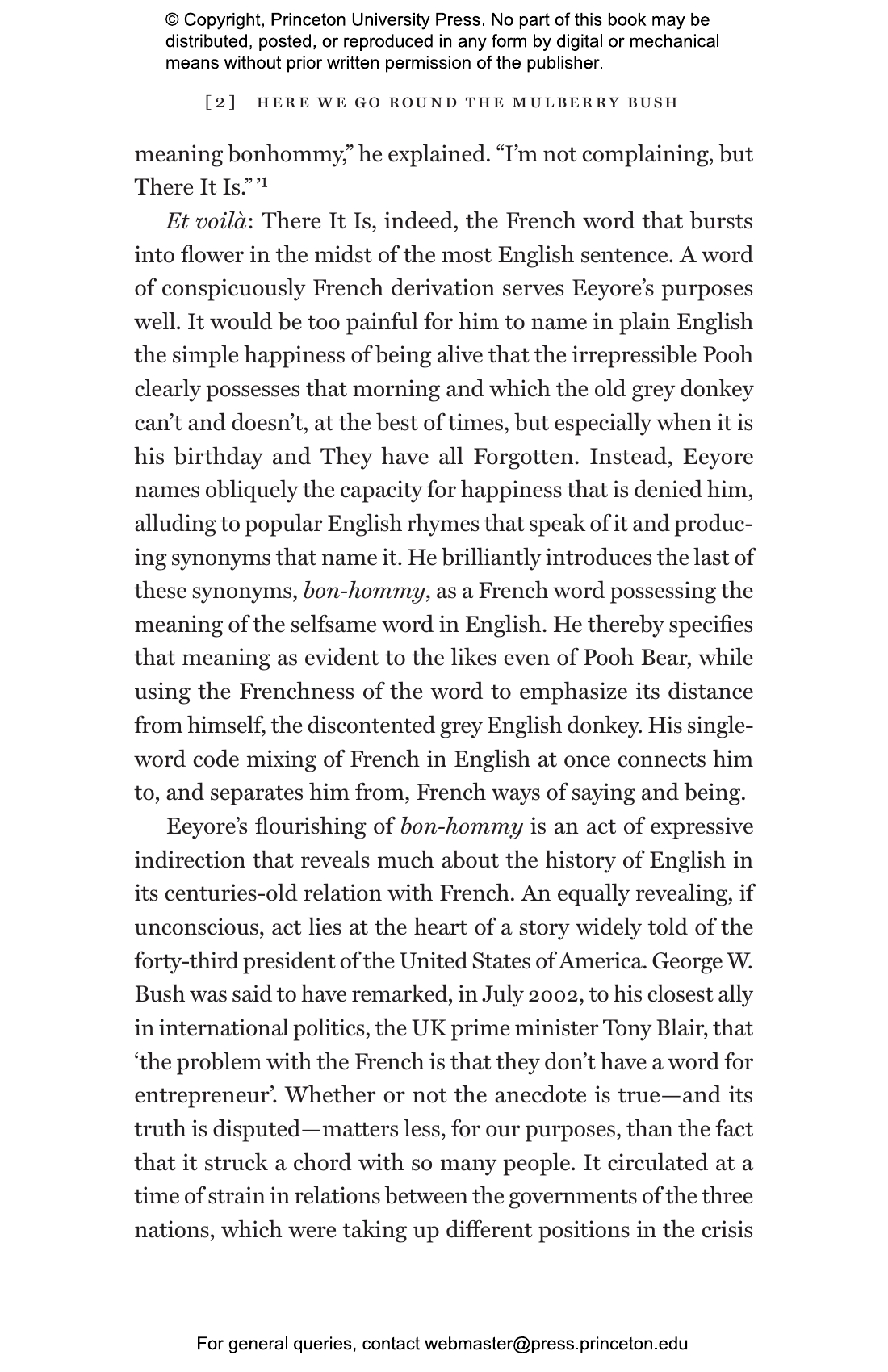 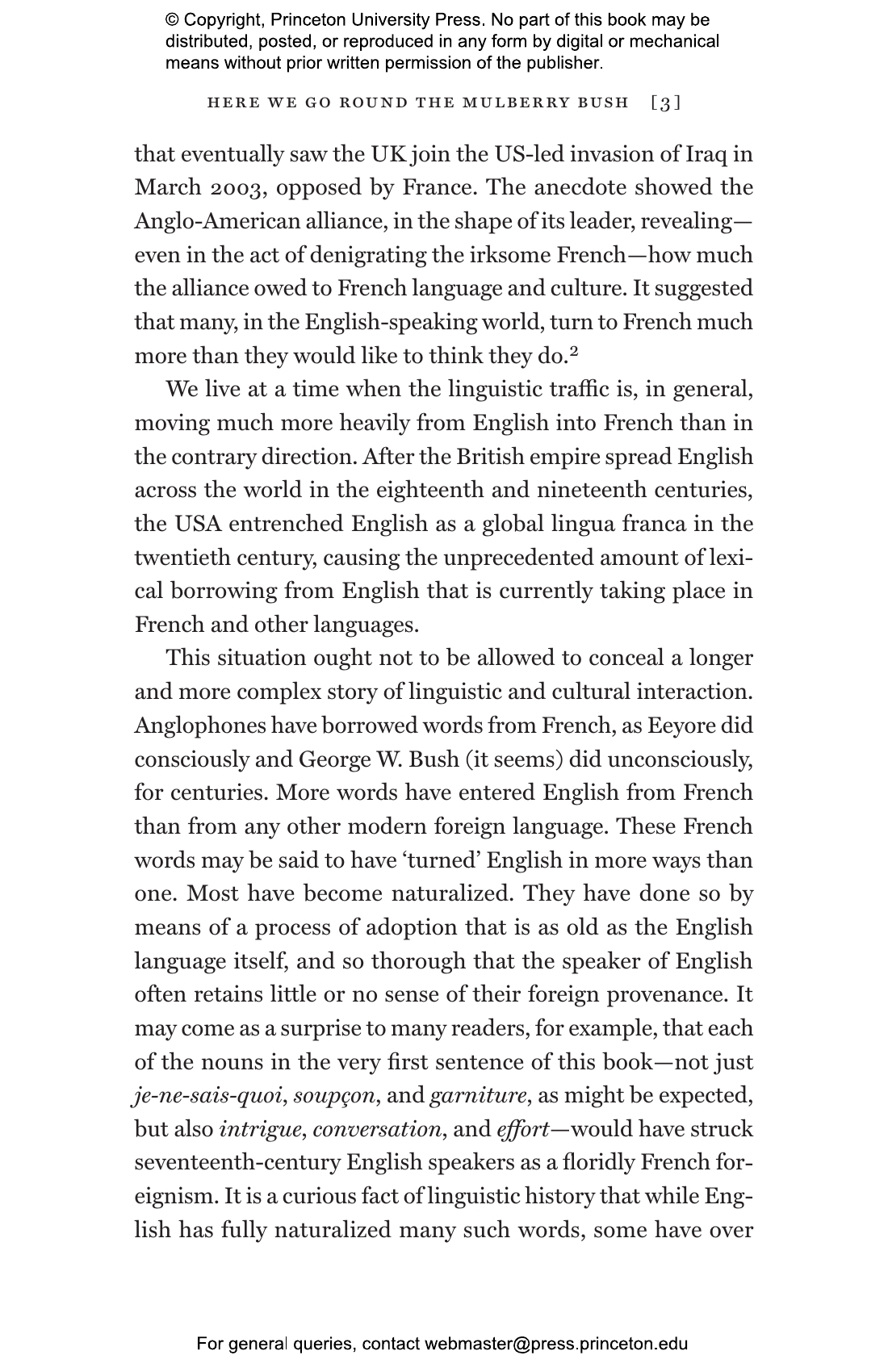 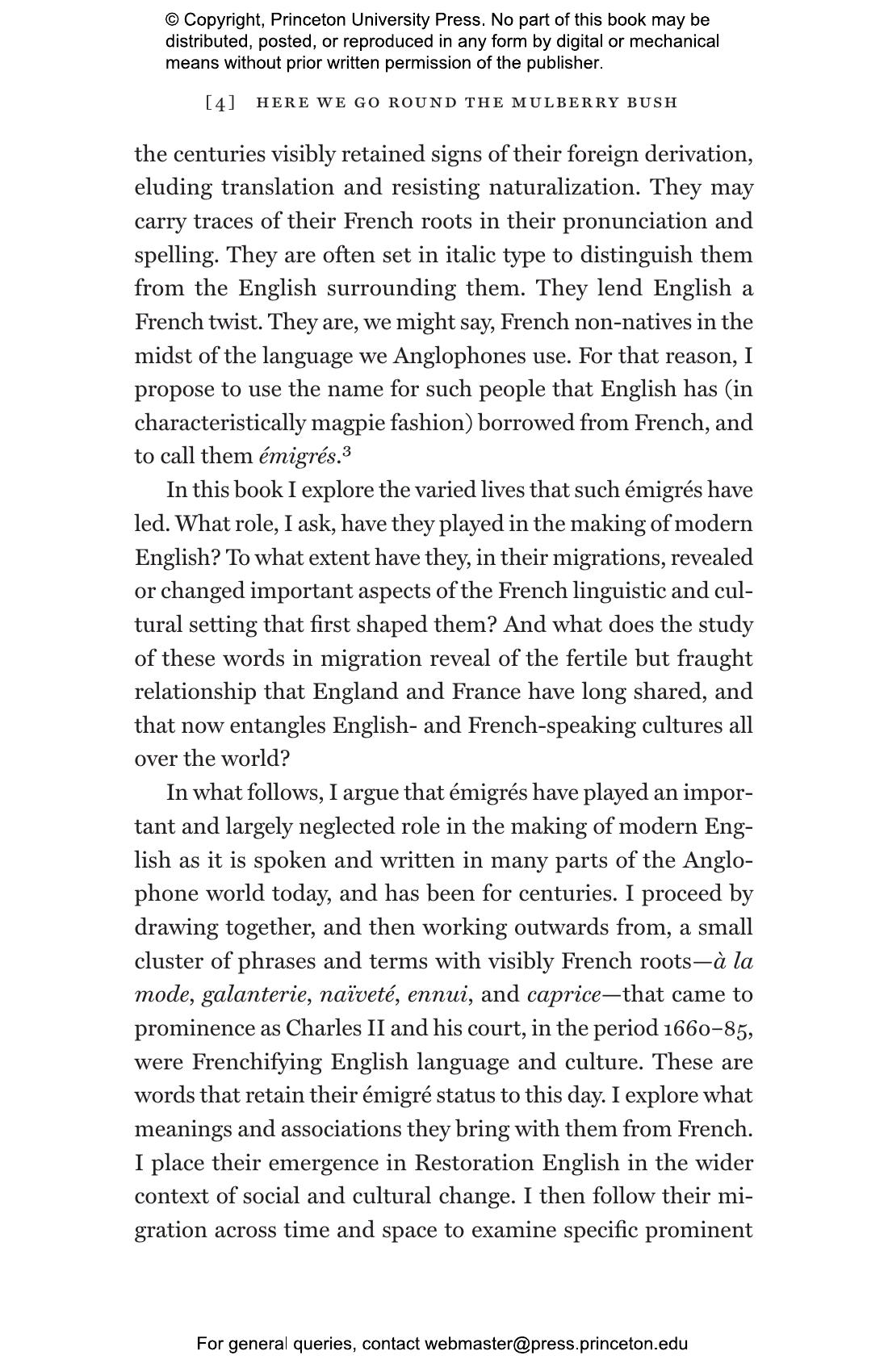 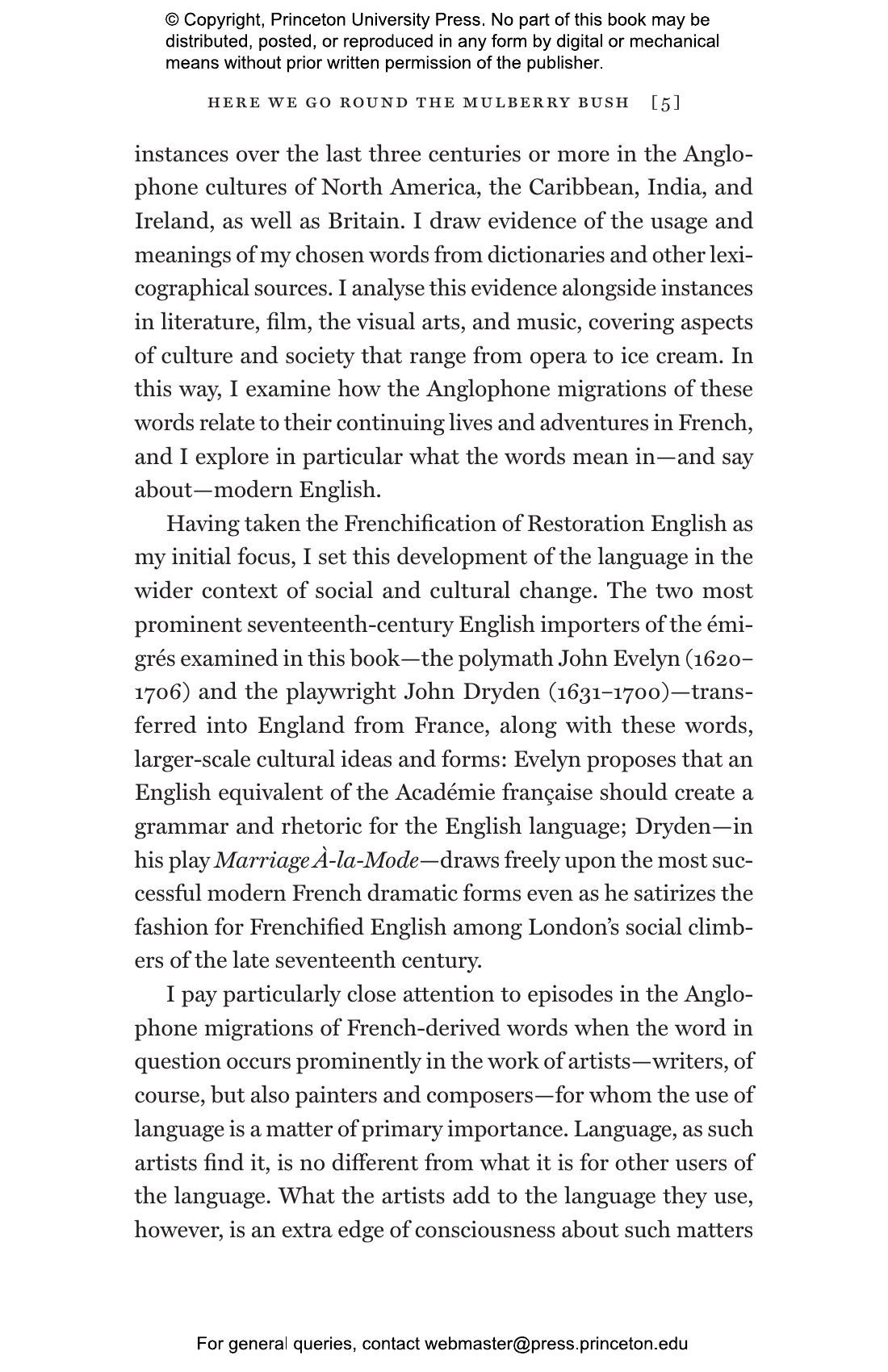 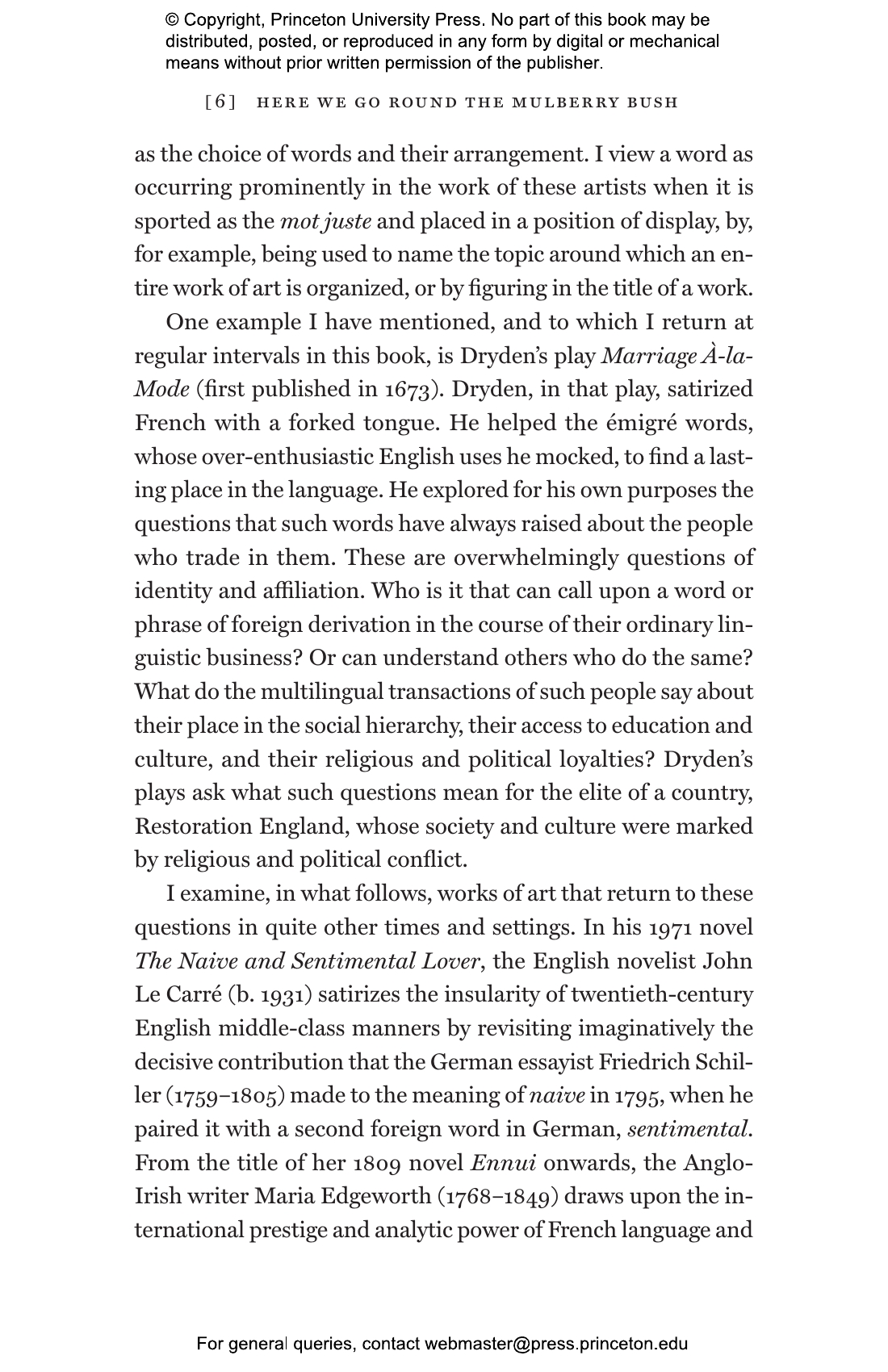 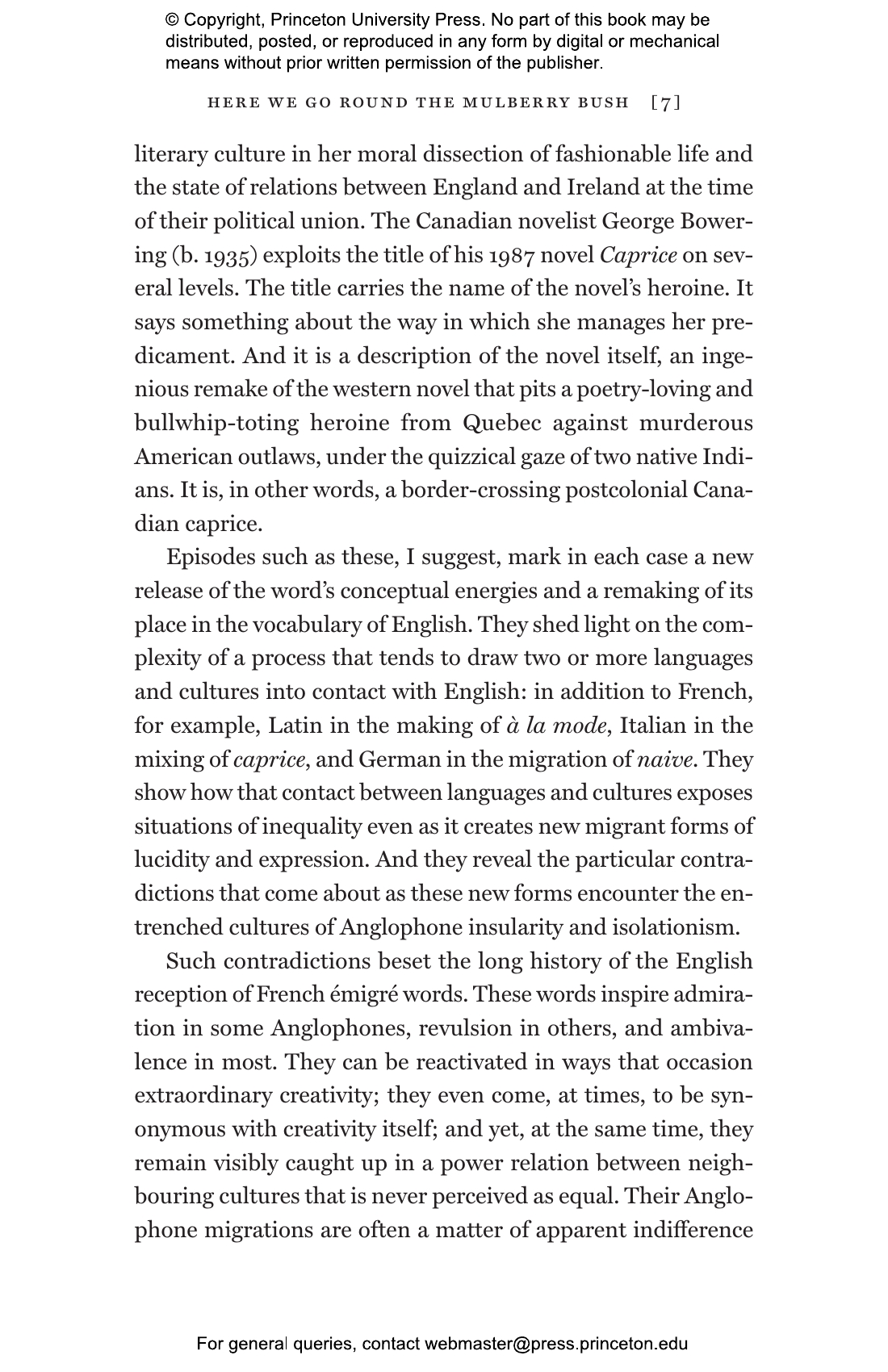 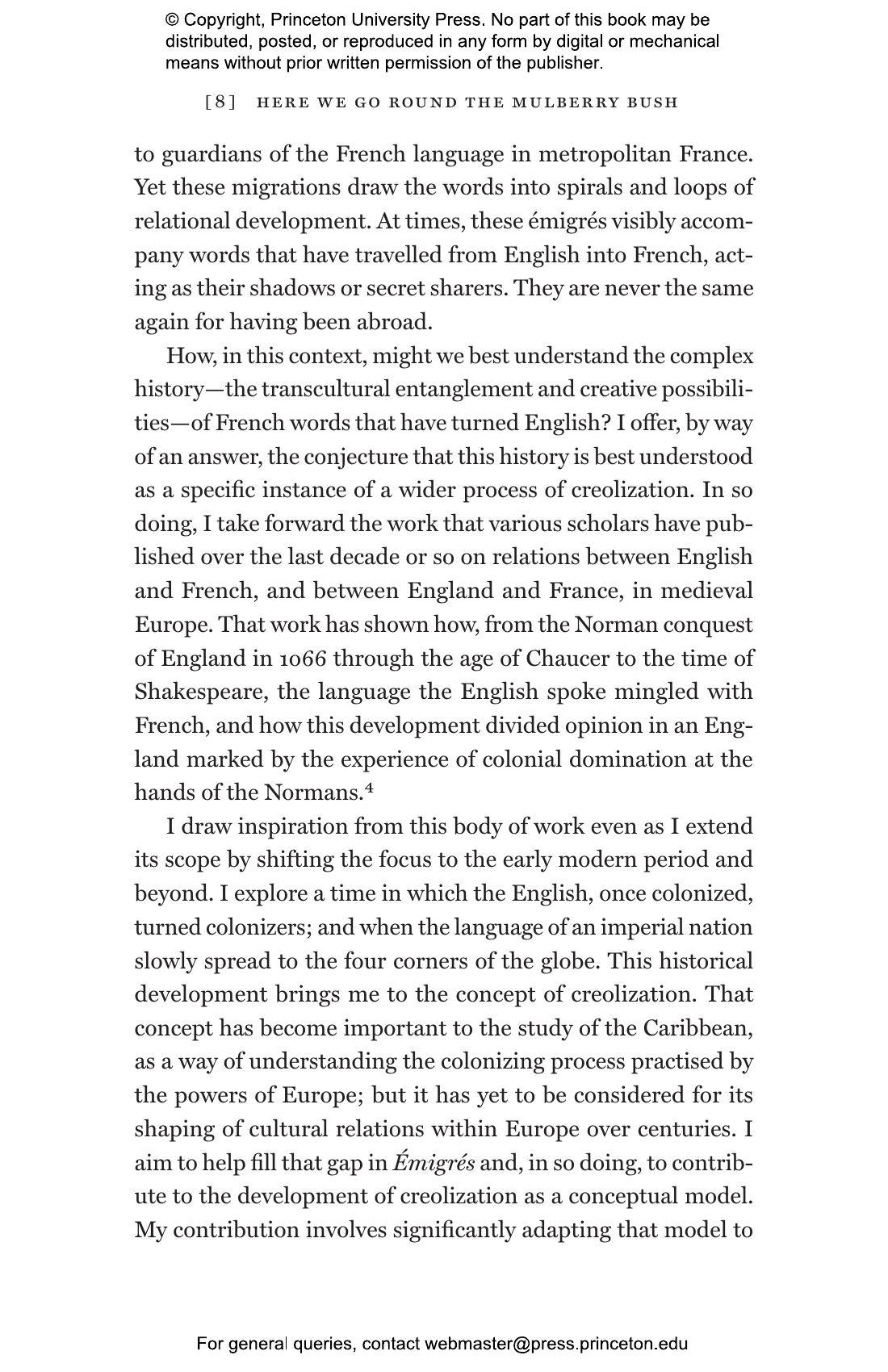 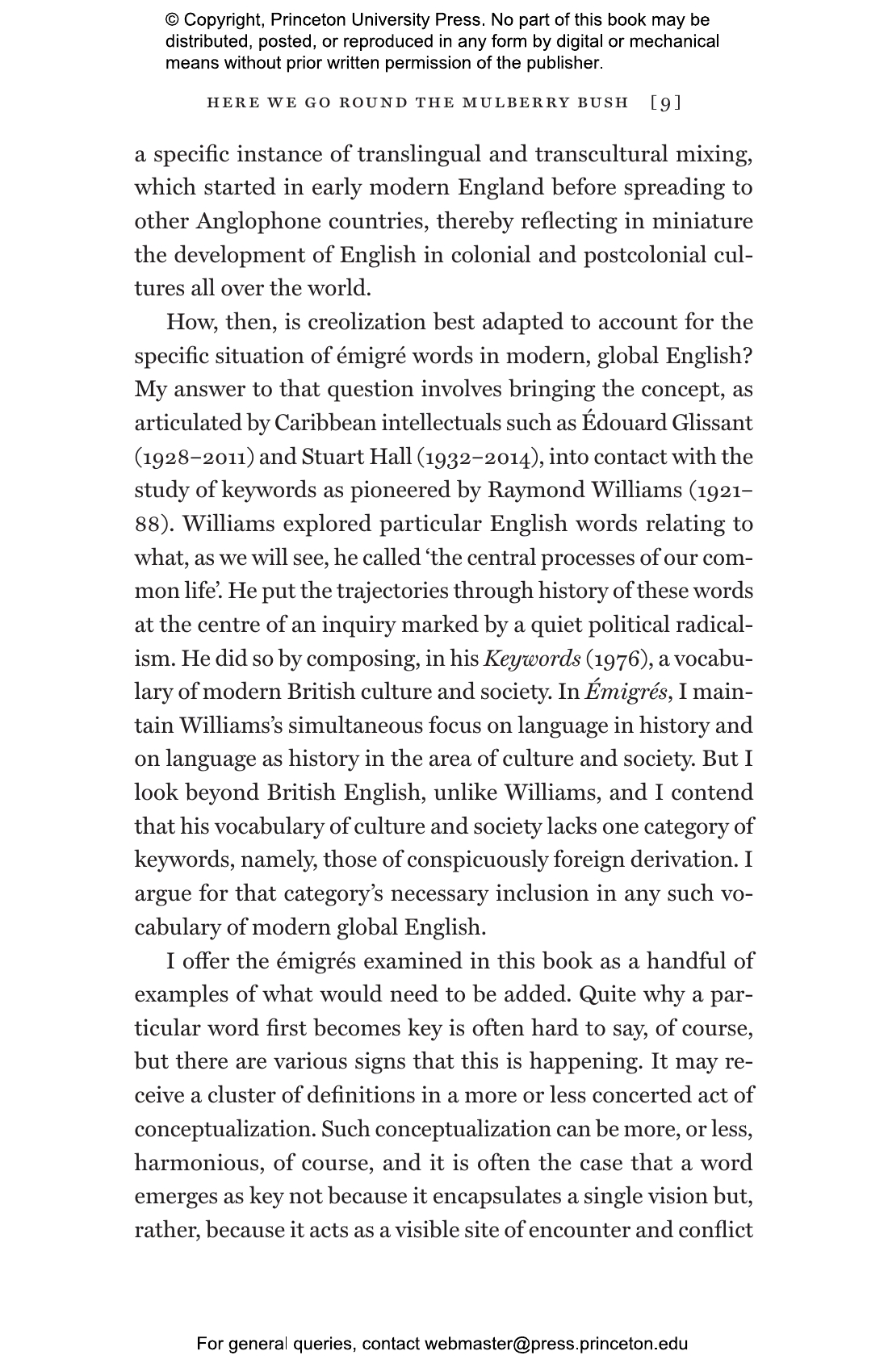 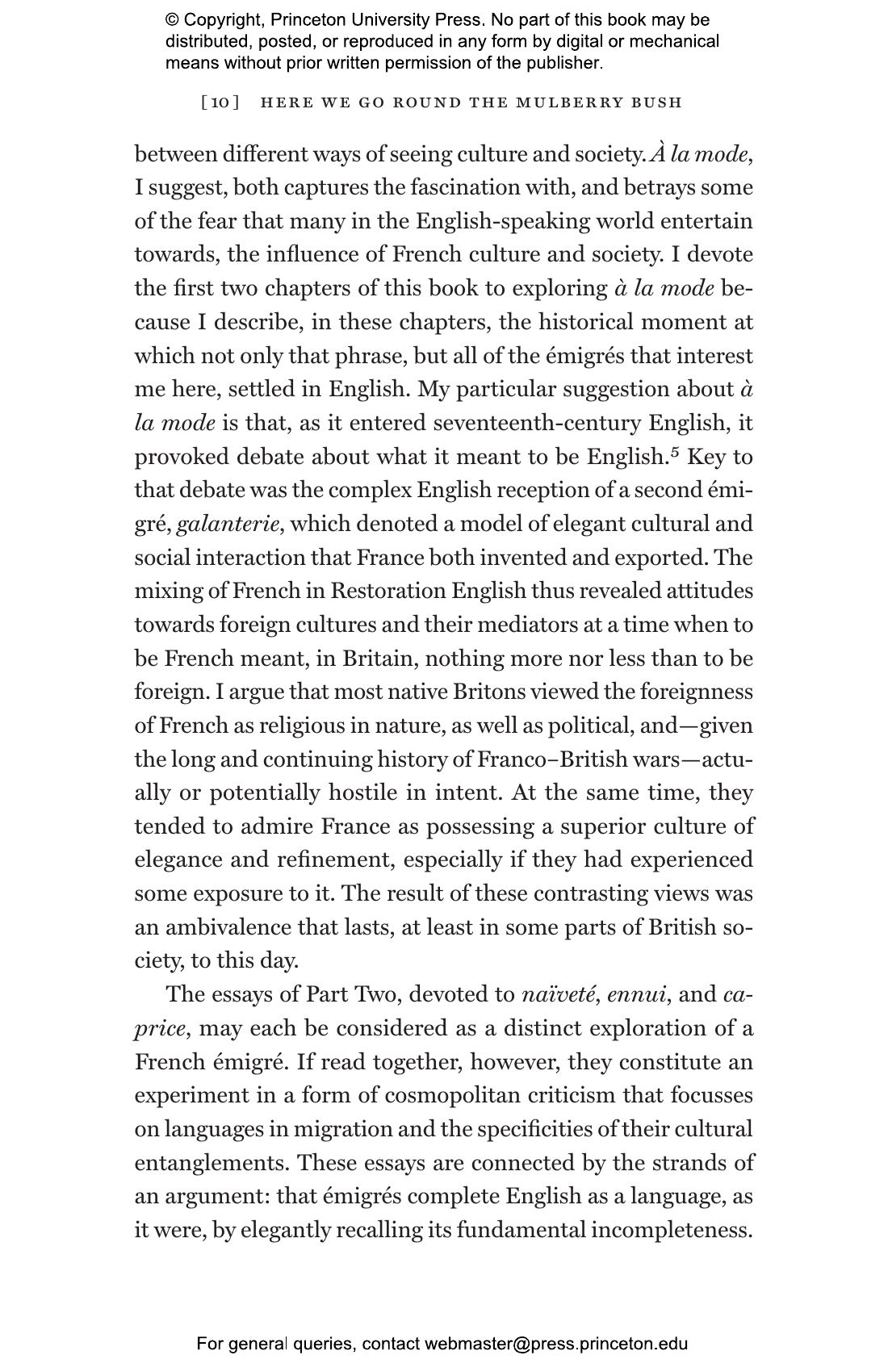 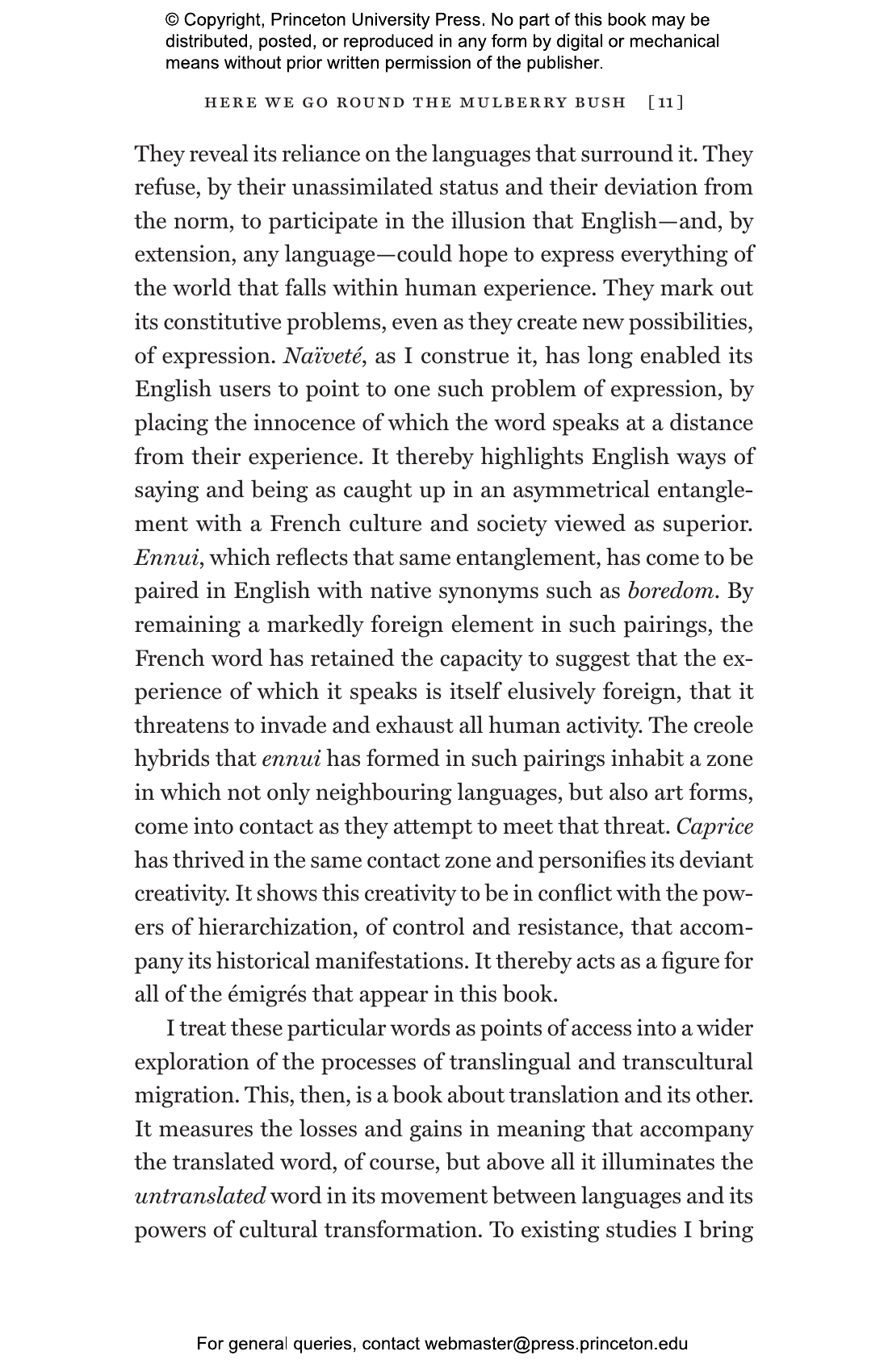 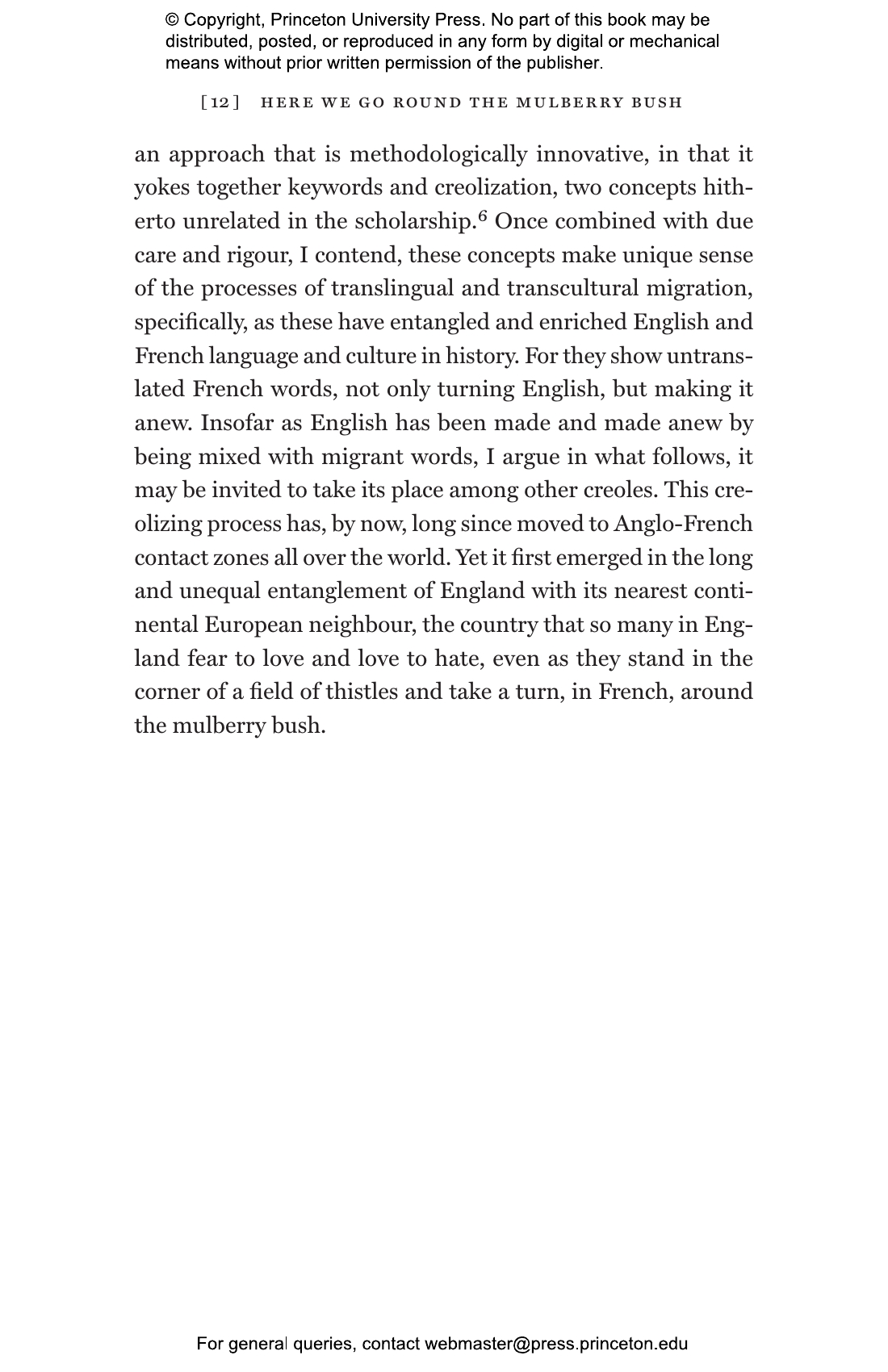 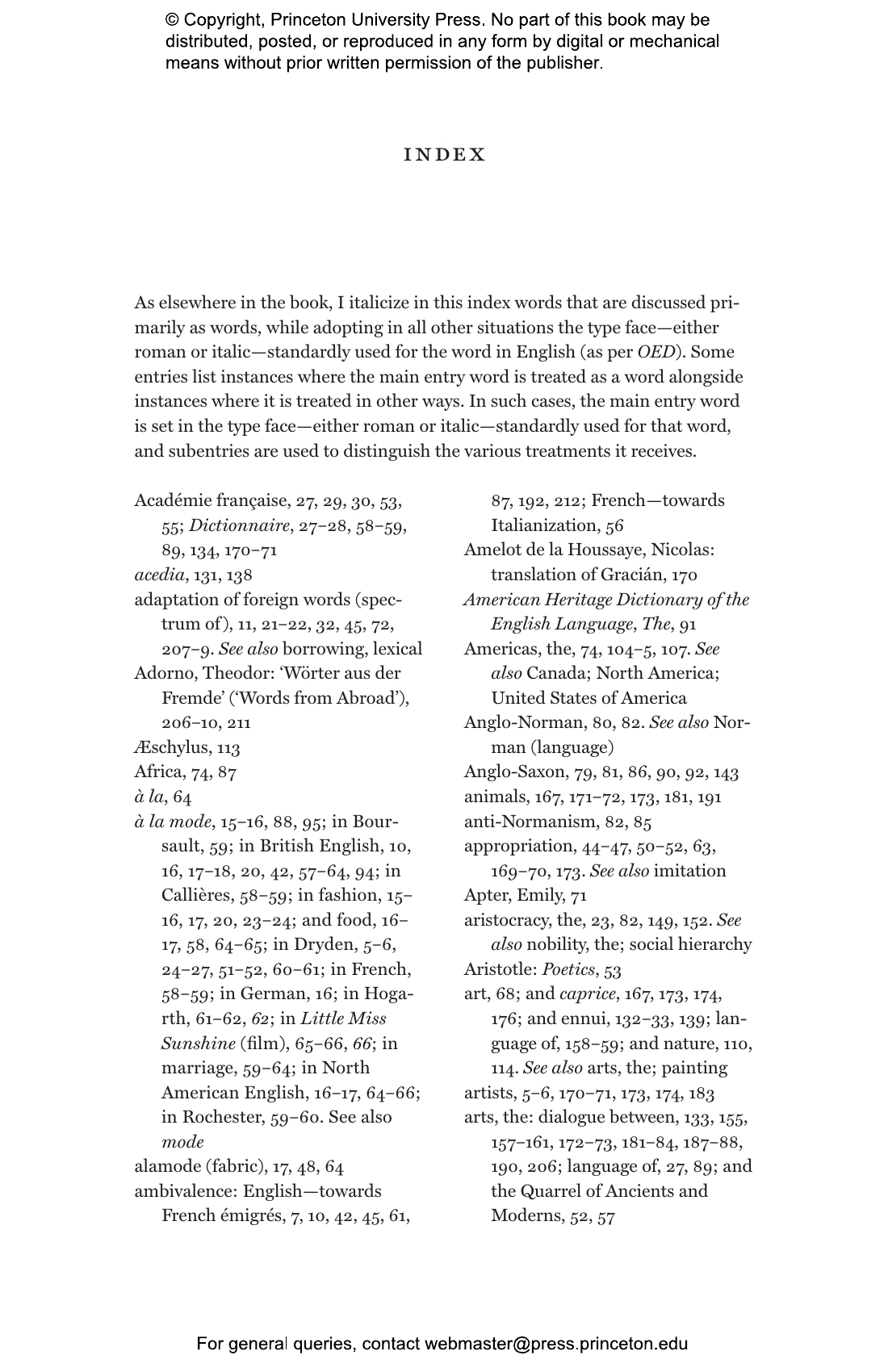 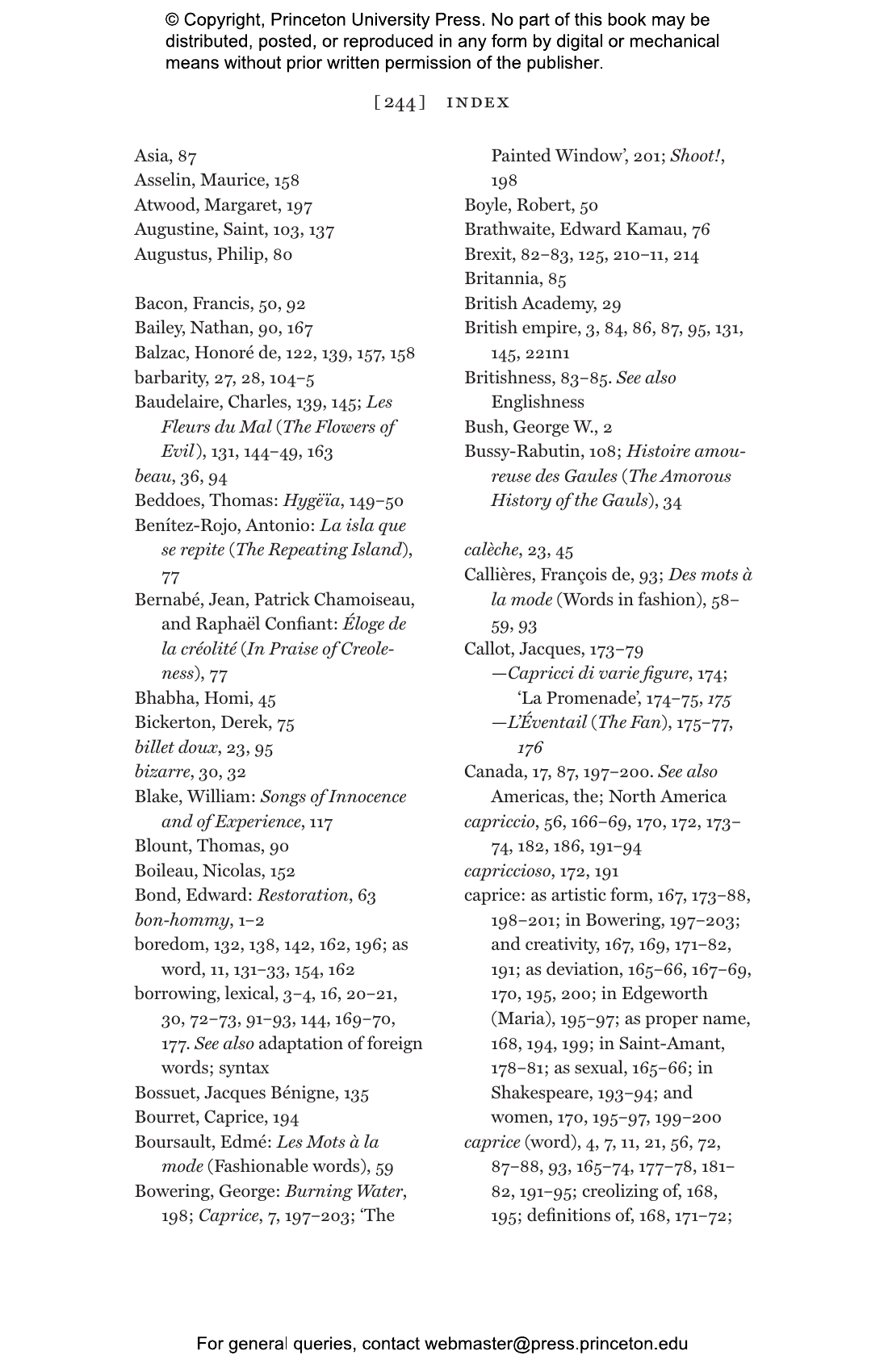 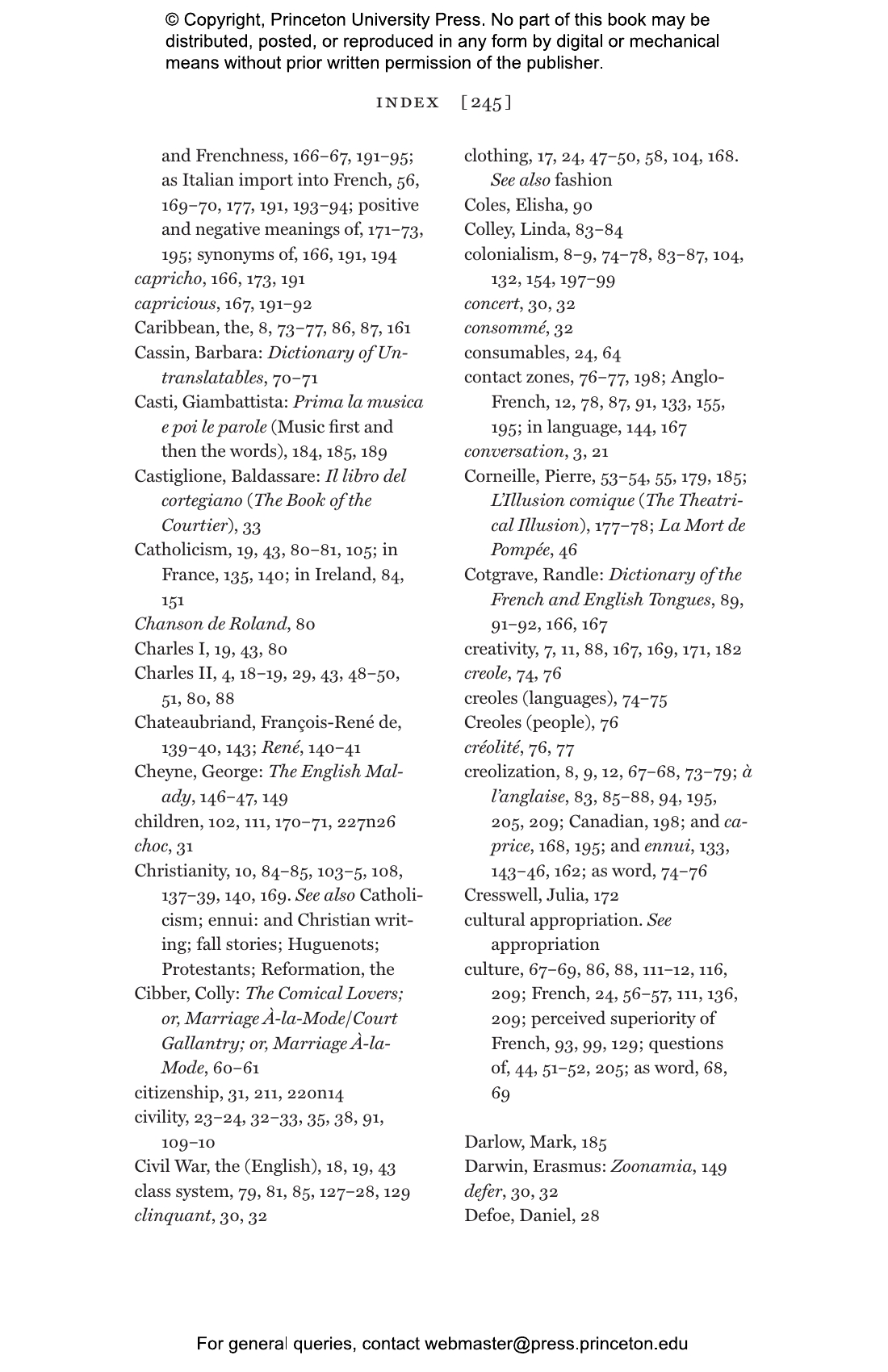 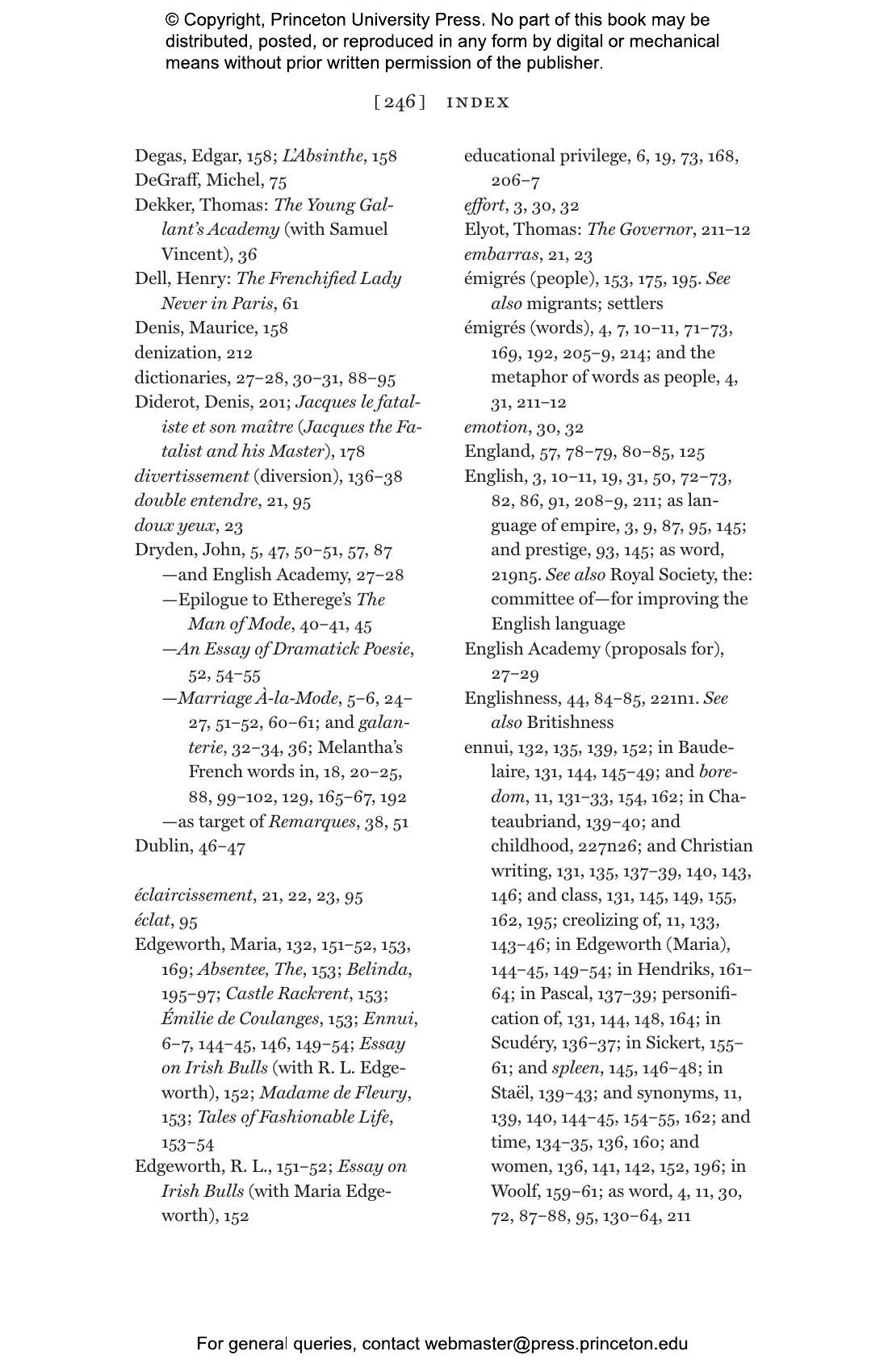 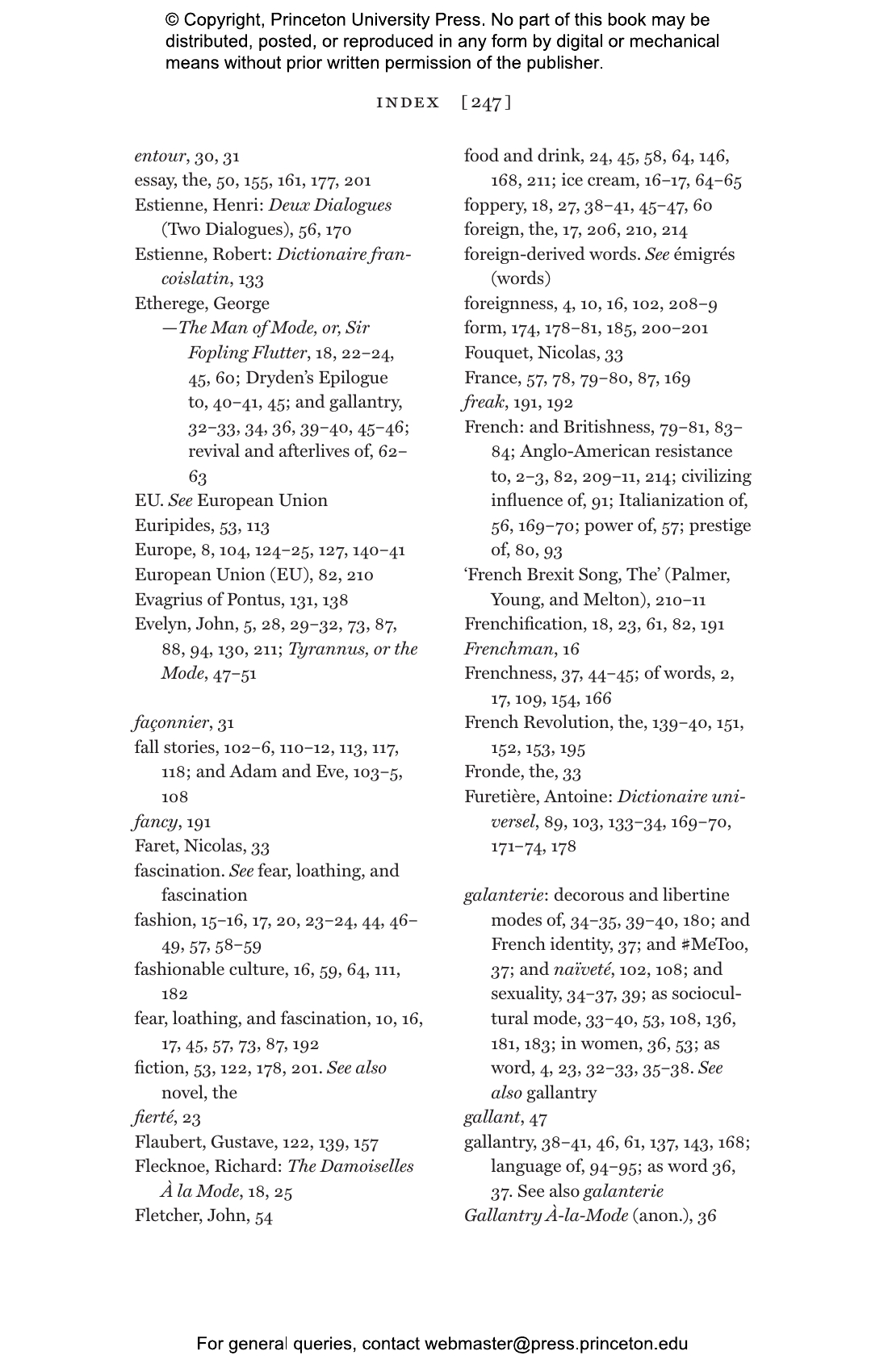 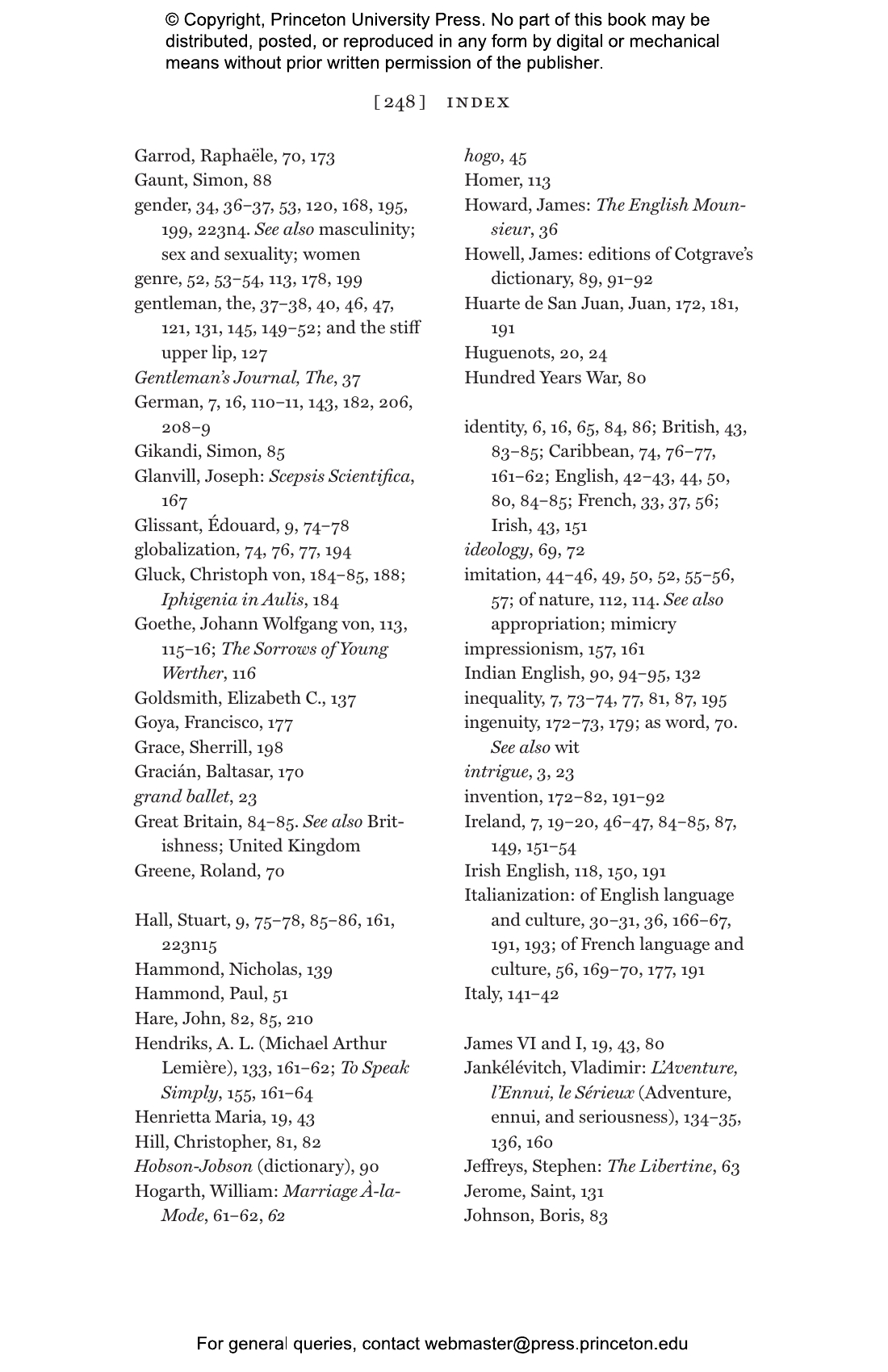 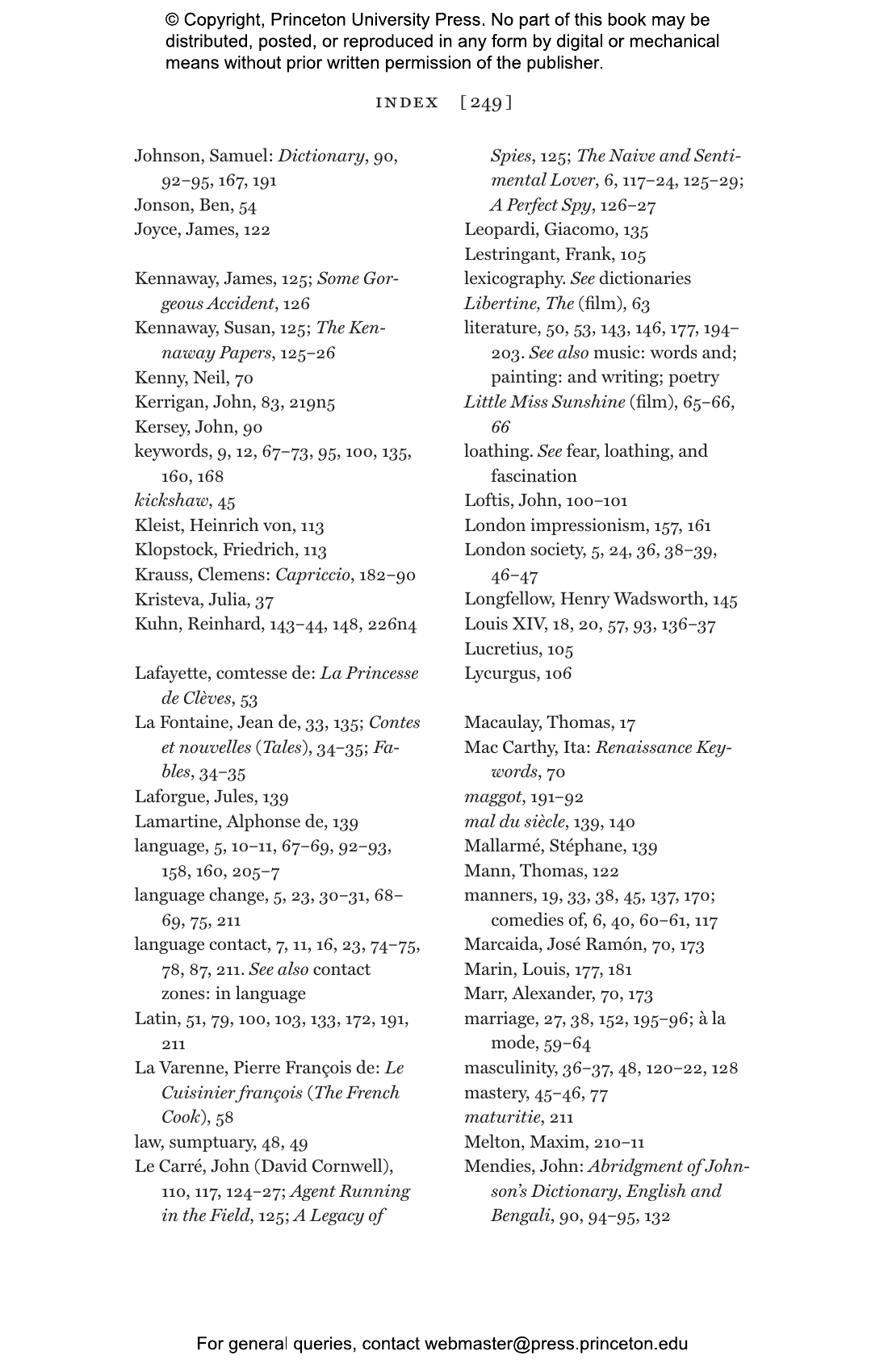 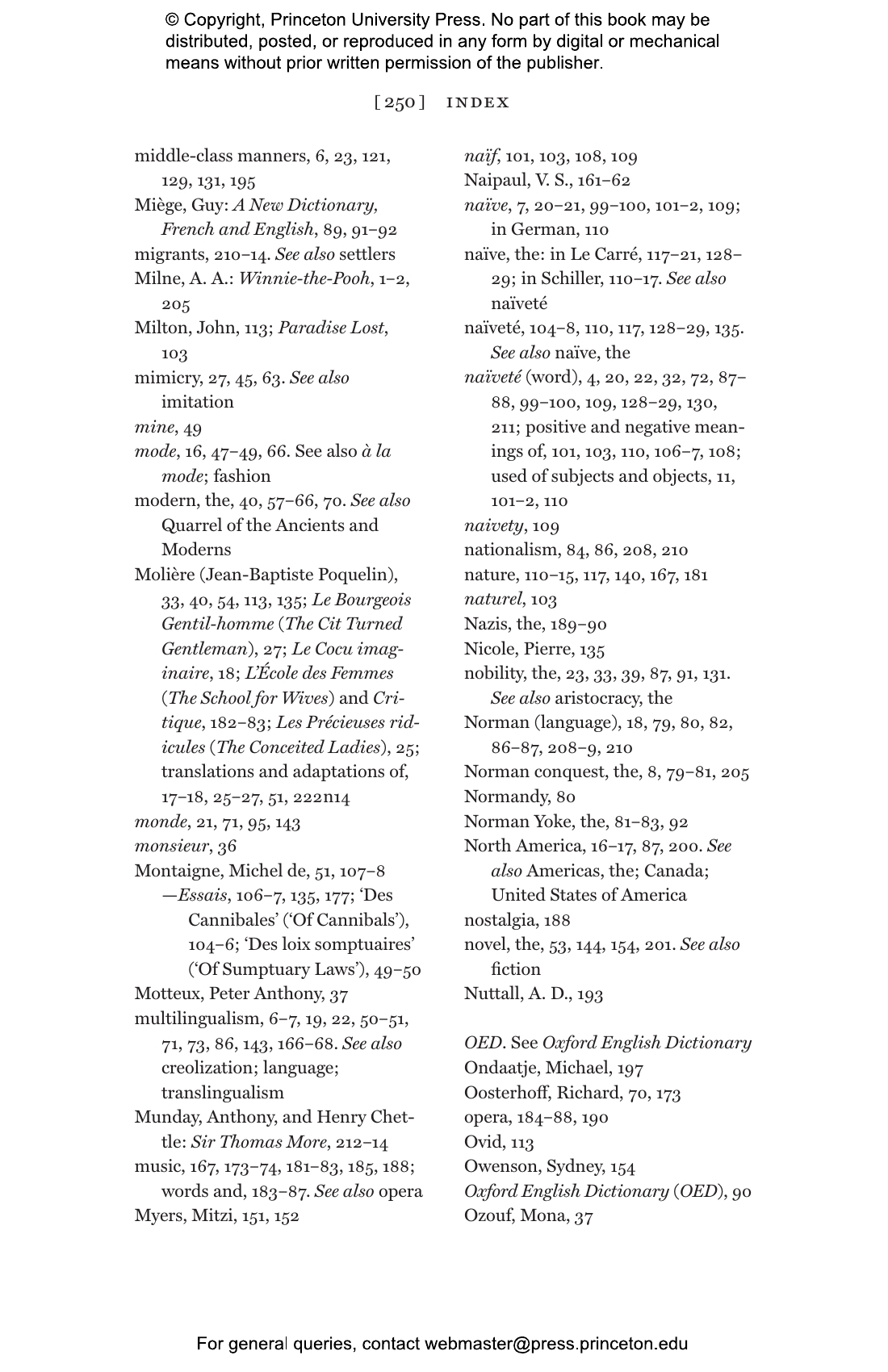 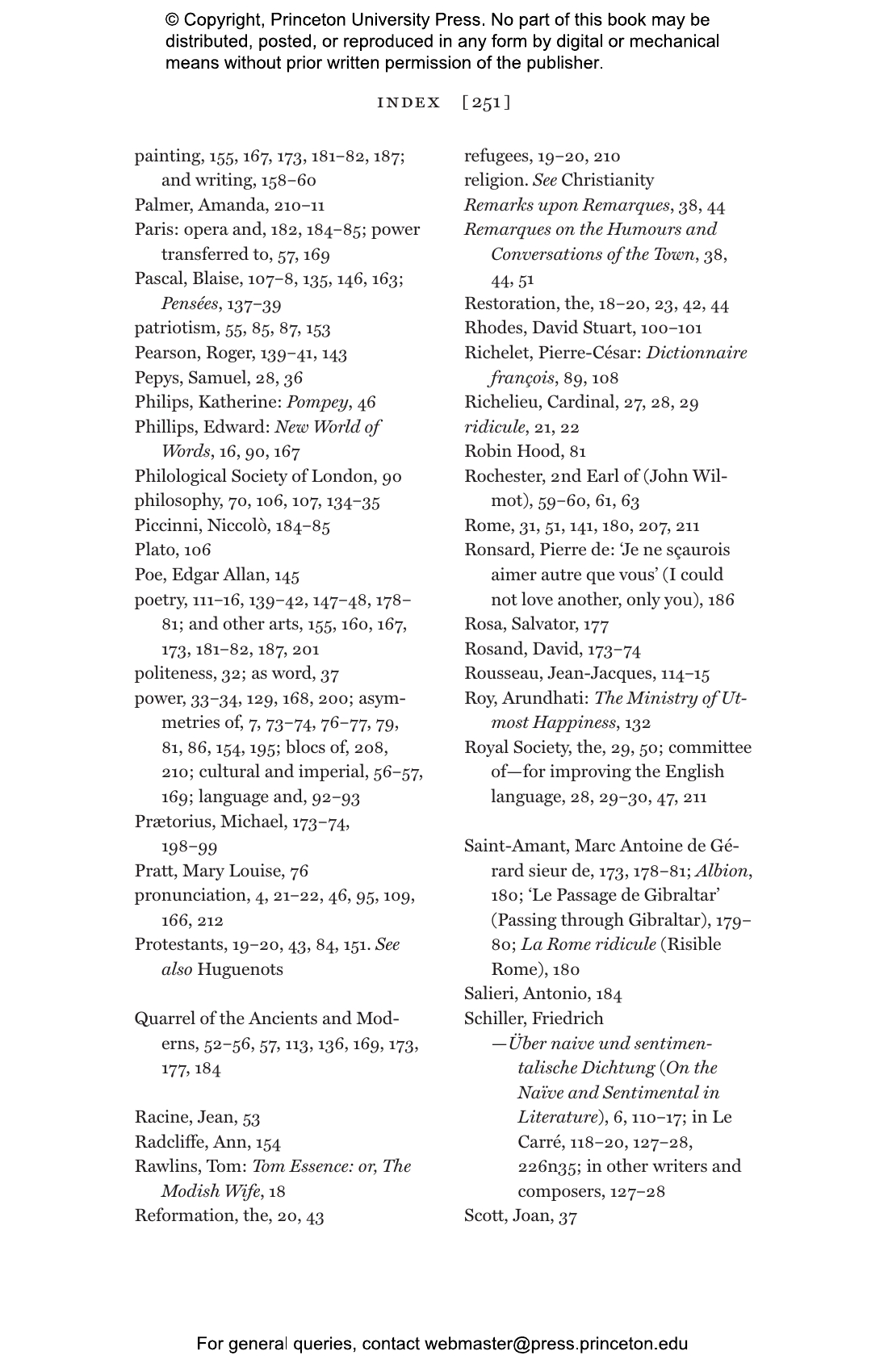 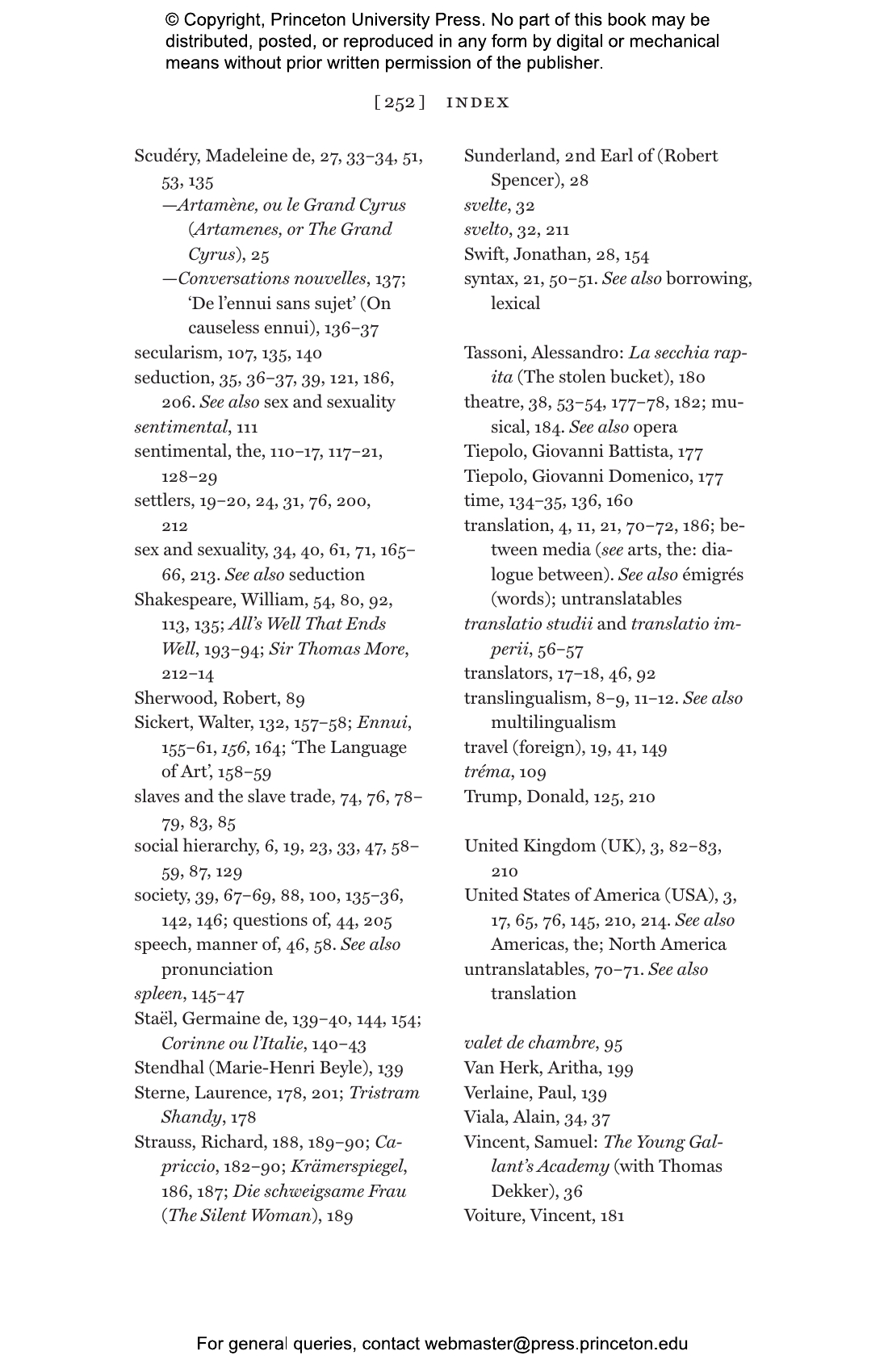 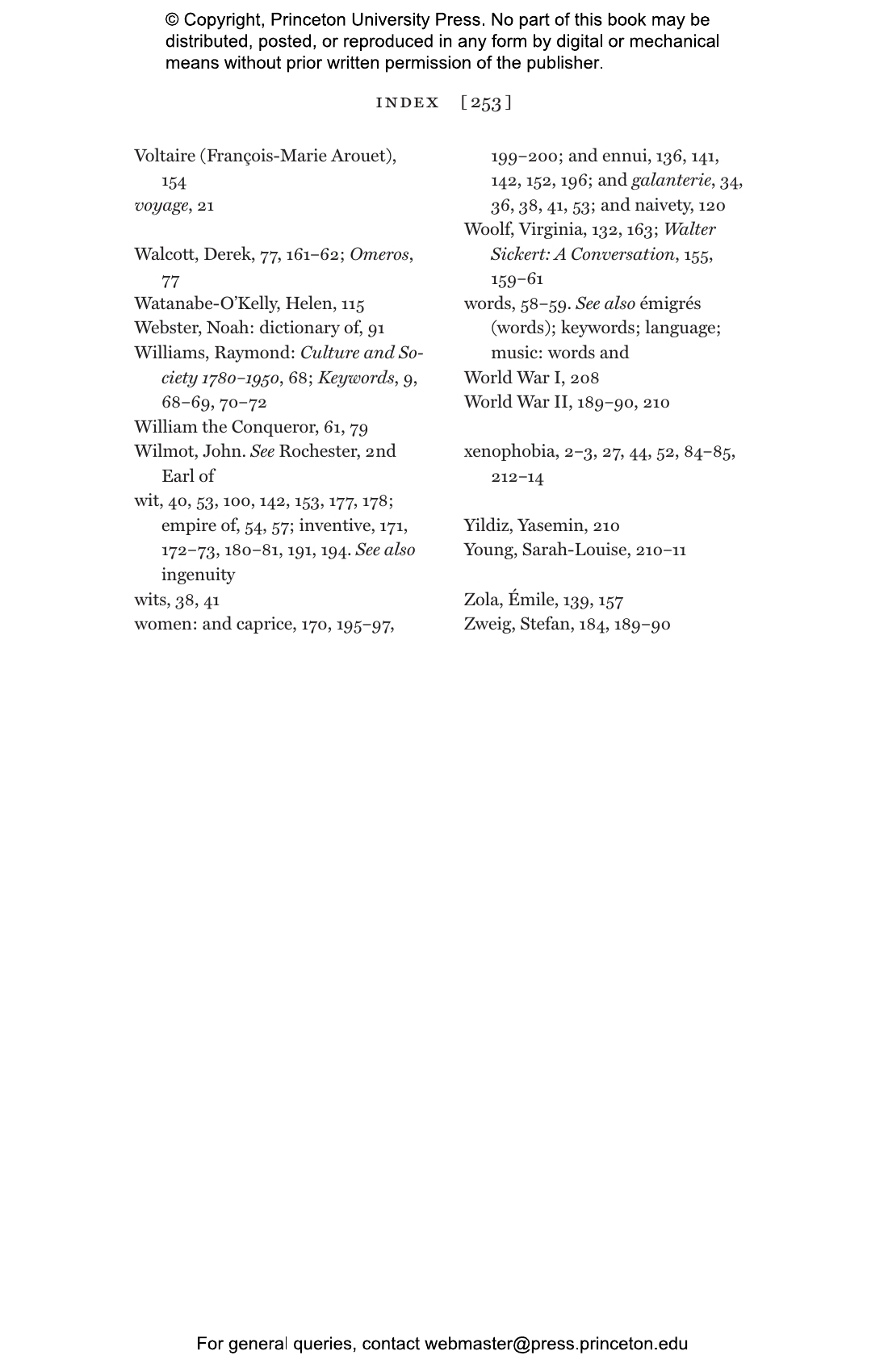 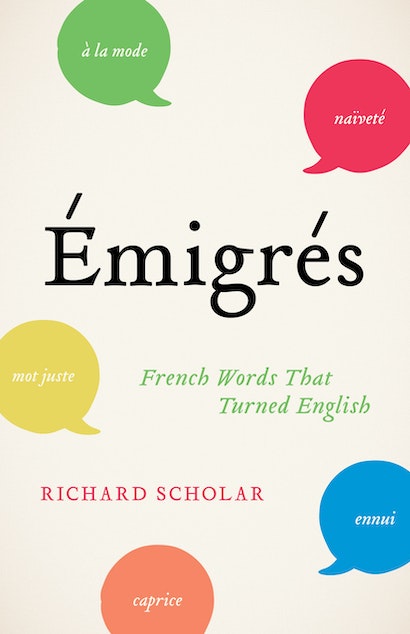 English has borrowed more words from French than from any other modern foreign language. French words and phrases—such as à la mode, ennui, naïveté and caprice—lend English a certain je-ne-sais-quoi that would otherwise elude the language. Richard Scholar examines the continuing history of untranslated French words in English and asks what these words reveal about the fertile but fraught relationship that England and France have long shared and that now entangles English- and French-speaking cultures all over the world.

Émigrés demonstrates that French borrowings have, over the centuries, “turned” English in more ways than one. From the seventeenth-century polymath John Evelyn’s complaint that English lacks “words that do so fully express” the French ennui and naïveté, to George W. Bush’s purported claim that “the French don’t have a word for entrepreneur,” this unique history of English argues that French words have offered more than the mere seasoning of the occasional mot juste. They have established themselves as “creolizing keywords” that both connect English speakers to—and separate them from—French. Moving from the realms of opera to ice cream, the book shows how migrant French words are never the same again for having ventured abroad, and how they complete English by reminding us that it is fundamentally incomplete.

At a moment of resurgent nationalism in the English-speaking world, Émigrés invites native Anglophone readers to consider how much we owe the French language and why so many of us remain ambivalent about the migrants in our midst. 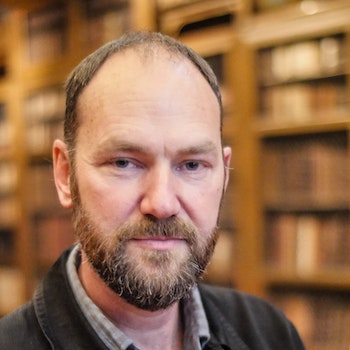 "Who needs ennui when we have old-fashioned boredom? . . . Scholar’s émigrés often manage to be posh and phoney at the same time, while still carrying a kind of precision it would be hard to find without them. . . . [In Émigrés] words have historical lives and tell us stories we may not know how to hear."—Michael Wood, London Review of Books

"A well-researched, convincing account of how our language has welcomed foreign words—but not always their native speakers."—Kirkus Reviews

"Scholar . . . reflects thoughtfully and sometimes surprisingly on the use of French words in English. . . . Given the current interest in immigration, Scholar’s book on immigrant words is erudite, witty, and surprisingly timely."—Publishers Weekly

"Like the émigré lexical items themselves, Emigrés crackles with hidden energy and is worth serious study."—Choice

"This thoughtful summation of how much English owes to French, and other languages, has a certain je-ne-sais-quoi and cultural relevance."—David Caddy, Tears in the Fence

"[A] lively and always entertaining book. . . . Although Professor Scholar clearly has a wealth of learning at his fingertips, enjoyment of Émigrés need not be limited to academic readers. The book will be readily understood by academic and non-specialist readers alike. . . . The habit of using émigré words is infectious: for his sang-froid, savoir faire, and bonhomie in guiding us on this voyage through the complexities of our national love-hate relationship with French—and the French—we are all indebted to Richard Scholar."—Annette Tomarken, H-France Review

"The ‘émigrés’ of this engaging book . . . occupy an uneasy centre ground between donor and borrower language, being neither French nor fully integrated into English. This ambiguity, Richard Scholar argues, reflects a long-standing ambivalence in English cultural attitudes to things French, ranging from fascination to disdain. . . . The book takes us on an eclectic journey from Restoration comedy to Winnie-the-Pooh’s companion Eeyore, John Le Carré and the Oscar-winning Little Miss Sunshine."—David Hornsby, Modern Language Review

"Émigrés . . . takes an approach informed by both French and English literature, and sets its findings in a cultural context which is wider still. This is pleasing, as the historical study of language perishes in a vacuum. . . . [A] humane and humanistic book."—Anthony Grant, French Studies

"The dream of a primordial linguistic simplicity has a flip side: the fear of linguistic creolization followed by a loss of national identity. Richard Scholar’s book exorcises this atavistic fear."—Maria Neklyudova, Shagi / Steps.

"Fascinating and informative. His research is excellent, he writes clearly, and the book is full of charming and memorable detail . . . .[Scholar] has written a captivating book in an accessible style. It would be good if reading him became de rigueur among students of language and literature, but perhaps ça serait trop beau."—Alan Dent, Northern Review of Books

"At once fascinating, entertaining and insightful, Richard Scholar's Émigrés reveals the power of language as a source of cultural diversity and tolerance in an age of resurgent nationalism. A necessary and important book to help break down borders in our minds and societies."—Roman Krznaric, author of The Good Ancestor and Empathy

“This is a beautiful piece of work—and a book we need. Without relation there is no living, the living is relation, every living language is relation.”—Patrick Chamoiseau, author of Migrant Brothers and Texaco

“This is a fascinating and compelling book, which I read with great pleasure.”—Alexis Tadié, Sorbonne University