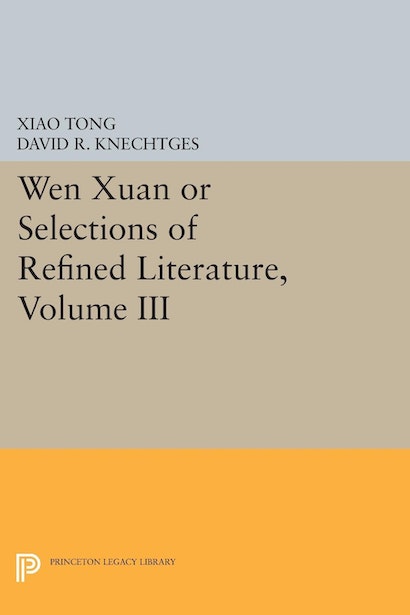 The Wen xuan, compiled by Xiao Tong (501-531) is the oldest surviving anthology of Chinese literature arranged by genre. It contains a total of 761 pieces of prose and verse by 130 writers from the late Zhou dynasty to the Liang dynasty (ca. 4th century B.C. to 6th century A.D.) The selection includes most of the best examples of fu (rhapsodies) and shi (lyric poems) from the Han, Wei, Jin, and North-South Dynasties periods, as well as representative examples of other early genres such as letters, memorials, prefaces, imperial edicts, inscriptions, epitaphs, laments, elegies, and eulogies.

This anthology was one of the primary sources of literary knowledge for educated Chinese in the premodern period, and it is still an essential work for specialists in classical Chinese literature. This volume completes the translation of the rhapsodies (chapters 13 through 19) and includes many important masterpieces of early Chinese literature such as the “Rhapsody on Literature” by Lu Ji, “Rhapsody on Contemplating the Mystery” by Zhang Heng, “Rhapsody on Dance” by Fu Yi, and “Rhapsody on the Zither” by Xi Kang.

"Knechtges's translation of the Wen Xuan figures among the most impressive scholarly achievements of twentieth-century Sinology. His translations are lucid and accurate, his scholarship impeccable, and the information he so liberally provides of the utmost importance."—The Journal of Asian Studies