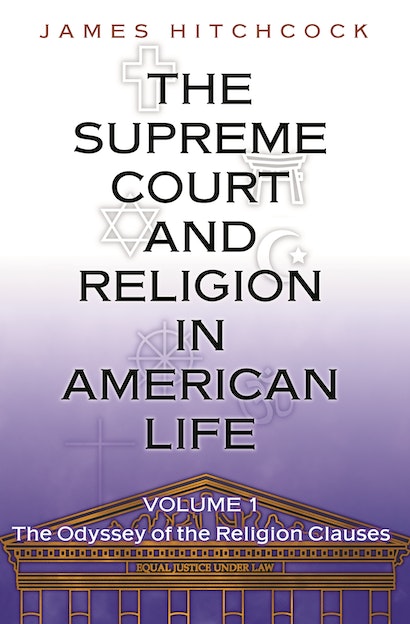 
This, the first of two volumes by historian and legal scholar James Hitchcock, provides the first comprehensive exploration of the Supreme Court’s approach to religion, offering a close look at every case, including some that scholars have ignored.


Hitchcock traces the history of the way the Court has rendered important decisions involving religious liberty. Prior to World War II it issued relatively few decisions interpreting the Religious Clauses of the Constitution. Nonetheless, it addressed some very important ideas, including the 1819 Dartmouth College case, which protected private religious education from state control, and the Mormon polygamy cases, which established the principle that religious liberty was restricted by the perceived good of society.


It was not until the 1940s that a revolutionary change occurred in the way the Supreme Court viewed religion. During that era, the Court steadily expanded the scope of religious liberty to include many things that were probably not intended by the framers of the Constitution, and it narrowed the permissible scope of religion in public life, barring most kinds of public aid to religious schools and forbidding almost all forms of religious expression in the public schools. This book, along with its companion volume, From “Higher Law” to “Sectarian Scruples,” offers a fresh analysis of the Court’s most important decisions in constitutional doctrine. Sweeping in range, it paints a detailed picture of the changing relationship between religion and the state in American history.

"The Supreme Court and Religion in American Life provides for the general reader a useful road map through the history and case law. The first of the two volumes tells the history rather comprehensively, with a minimum of interpretive overlay. The second tries to understand the story. Hitchcock's work is especially valuable for his extensive coverage of the Court's religion jurisprudence before the deluge—that is, before the 1940s, when the Court deliberately made itself a tribunal of the nation's religious disputes."—Russell Hittinger, First Things