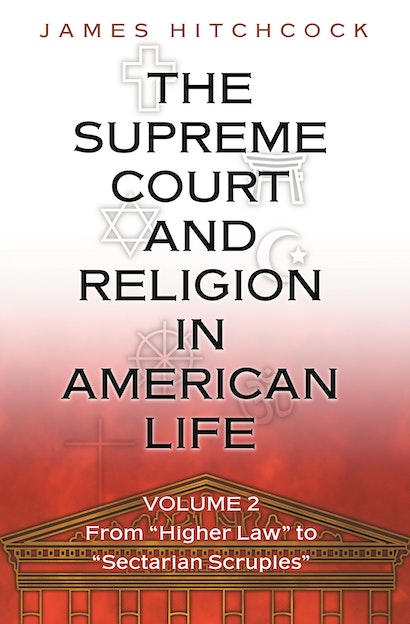 
This, the second of two volumes by historian and legal scholar James Hitchcock, offers a complete analysis and interpretation of the Court’s historical understanding of religion, explaining the revolutionary change that occurred in the 1940s. In Volume I: The Odyssey of the Religion Clauses (Princeton), Hitchcock provides the first comprehensive survey of the court cases involving the Religion Clauses, including a number that scholars have ignored.


Here, Hitchcock examines how, in the early history of our country, a strict separation of church and state was sustained through the opinions of Jefferson and Madison, even though their views were those of the minority. Despite the Founding Fathers’ ideas, the American polity evolved on the assumption that religion was necessary to a healthy society, and cooperation between religion and government was assumed.


This view was seldom questioned until the 1940s, notes Hitchcock. Then, with the beginning of the New Deal and the appointment of justices who believed they had the freedom to apply the Constitution in new ways, the judicial climate changed.


Hitchcock reveals the personal histories of these justices and describes how the nucleus of the Court after World War II was composed of men who were alienated from their own faiths and who looked at religious belief as irrational, divisive, and potentially dangerous, assumptions that became enshrined in the modern jurisprudence of the Religion Clauses. He goes on to offer a fascinating look at how the modern Court continues to grapple with the question of whether traditional religious liberty is to be upheld.

"Hitchcock's work offers timely admonition to those who are concerned about religion, politics, and society. As church and state increasingly intersect, his proposal offers a compelling way forward: to see separation as governing the relationship between religion and government and accommodation as defining the relationship between religion and culture."—Jeremiah H. Russell, Christian Social Thought

"These two volumes are a wonderful gift to the scholarly enterprise of American church-state jurisprudence. They are part of a growing body of literature that is forcing many of us to revisit, either critically or sympathetically, the received understanding of the history of, and the judicial reasoning about, the religion clauses of America's First Amendment. . . . [I]t is the sort of scholarship that for years to come will be included in the canon of works that must be addressed before one offers an alternative or complementary perspective."—Francis J. Beckwith, Journal of Church and State