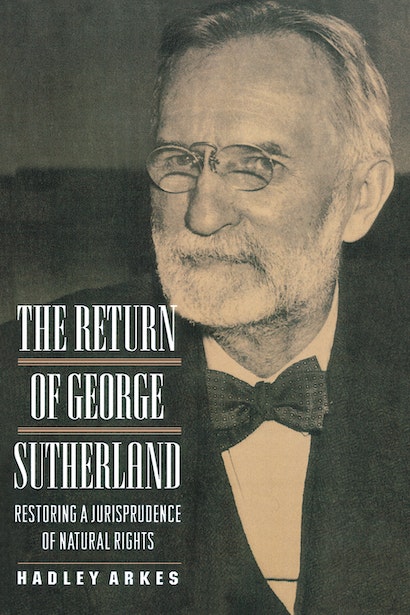 In this book, Hadley Arkes seeks to restore, for a new generation, the jurisprudence of the late Justice of the Supreme Court George Sutherland — a jurisprudence anchored in the understanding of natural rights. The doctrine of natural rights has become controversial in our own time, while Sutherland has been widely maligned and screened from our historical memory. He is remembered today as one of the “four horsemen” who resisted Roosevelt and the New Deal; but we have forgotten his leadership in the cause of voting rights for women. Both liberal and conservative jurists now deride Sutherland, yet both groups continue to draw upon his writings. Liberals look to Sutherland for a jurisprudence that protects “privacy” against the rule of majorities, as in matters concerning abortion or gay rights. Conservatives will appeal to his defense of freedom in the economy.


However, both liberals and conservatives deny the premises of natural rights that provided the ground, and coherence, of Sutherland’s teaching. Arkes contends that Sutherland can supply what is missing in both conservative and liberal jurisprudence. He argues that if a new generation can look again, with unclouded eyes, at the writings of Sutherland, both liberals and conservatives can be led back to the moral ground of their jurisprudence. This compelling intellectual biography introduces readers to an urbane man, and a steely judge, who has been made a stranger to them.

Hadley Arkes is the Edward Ney Professor of Jurisprudence and American Institutions at American College. His books include First Things and Beyond the Constitution (Both published by Princeton University Press).

"Advocating that the Supreme Court again espouse natural- rightsjurisprudence is an ambitious undertaking, as is attempting to rehabilitate the Supreme Court justice who, for many, personifies the ideas behind substantive due process. Hadley Arkes accomplishes both tasks with rhetorical skill and intellectual tenacity.... An important book ... that challenges us to view constitutional rights afresh through the powerful lens of natural law."—Steven J. Eagle, The Wall Street Journal

"Clearly and cogently and even dramatically done.... Hadley Arkes leads us into the deepest jungles of constitutional thought.... His is a stimulating safari."—Louis Auchincloss, The New Criterion

"Arkes's work is a welcome addition to this emerging body of constitutional thought. If given the attention it deserves, it may well fulfill both objectives embodied in its title."—Judge Alex Kozinski, National Review