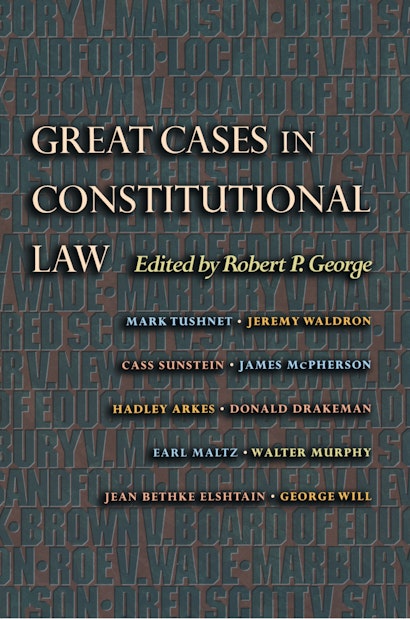 Slavery, segregation, abortion, workers’ rights, the power of the courts. These issues have been at the heart of the greatest constitutional controversies in American history. And in this concise and thought-provoking volume, some of today’s most distinguished legal scholars and commentators explain for a general audience how five landmark Supreme Court cases centered on those controversies shaped the country’s destiny and continue to affect us even now. The book is a profound exploration of the Supreme Court’s importance to America’s social and political life. It is also, as many of the contributors show, an intriguing reflection of what some have seen as an important trend in legal scholarship away from an uncritical belief in the essentially benign nature of judicial power.


Robert George opens with an illuminating survey of the themes that unite and divide the five cases. Other contributors then examine each case in detail through a lively commentary-and-response format. Mark Tushnet and Jeremy Waldron exchange views on Marbury v. Madison, the pivotal 1803 case that established the power of the courts to invalidate legislation. Cass Sunstein and James McPherson discuss Dred Scott v. Sandford (1857), the notorious case that confirmed the rights of slaveowners, declared that black people could not be American citizens, and is often seen as a cause of the Civil War. Hadley Arkes and Donald Drakeman explore the legacy of Lochner v. New York (1905), a case that ushered in decades of judicial hostility to social welfare laws. Earl Maltz and Walter Murphy assess Brown v. Topeka Board of Education (1954), the famous case that ended racial segregation in public schools. Finally, Jean Bethke Elshtain and George Will tackle Roe v. Wade (1973), still a flashpoint a quarter of a century later in the debate over abortion. While some of the contributors show sympathy for strong judicial interventions on social issues, many across the ideological spectrum are sharply critical of judicial activism.


A compelling introduction to the greatest cases in U.S. constitutional law, this is also an enlightening glimpse of the state of the art in American legal scholarship.

Robert P. George is McCormick Professor of Jurisprudence at Princeton University. He has served as a presidential appointee to the U.S. Commission on Civil Rights and as a Judicial Fellow at the Supreme Court of the United States, where he received the Justice Tom C. Clark Award.

"This book provides an excellent overview of landmark Supreme Court Cases, most of which impacted the court's power and direction."—Booklist

"A collection of scholarly but accessible essays. . . . The principal essays range in style from professorial disputation to impassioned moral advocacy.. . . [This] volume thoughtfully explains the views of those who advocate more of the original Constitution, and less of the Supreme Court, in American political life."—Publishers Weekly

"All essays provide interesting insight into the concepts of judicial review and judicial activism. . . . [An] excellent book. . . . I highly recommend it to all."—Ruth Ann Wary, Law and Politics Book Review

"The United States Supreme Court is among the most important, but least understood, institutions in American life. Its decisions can profoundly affect, for good or ill, the well-being of our republic. Great Cases in Constitutional Law should be read because it will further the public's understanding of the Court's role. It is a book of many learned essays—provocative, illuminating, compelling."—William J. Bennett

"In a country where nearly every major public issue is affected by Supreme Court opinions, the Great Cases are too important to remain the preserve of legal specialists. Robert George has performed a genuine service by bringing together some of the country's leading public intellectuals to make accessible to the general reader the debates and decisions that have shaped, and continue to shape, our democratic experiment."—Mary Ann Glendon, Harvard University

"In this book, some of our most interesting contemporary constitutional thinkers attack those who look to the Supreme Court (or, for that matter, the Constitution) for ultimate resolution of our most basic political controversies—whether slavery in the past or affirmative action, abortion, or the right to die in the present. The essays are readily accessible to student and general reader alike and should provoke much-needed thought about the roles of the Constitution and the Court as its ostensible guardian."—Sanford Levinson, University of Texas, Austin