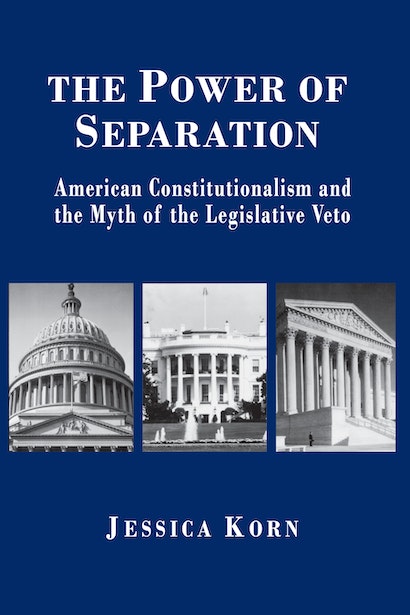 Jessica Korn challenges the notion that the eighteenth-century principles underlying the American separation of powers system are incompatible with the demands of twentieth-century governance. She demostrates the continuing relevance of these principles by questioning the dominant scholarship on the legislative veto. As a short-cut through constitutional procedure invented in the 1930s and invalidated by the Supreme Court’s Chadha decision in 1983, the legislative veto has long been presumed to have been a powerful mechanism of congressional oversight. Korn’s analysis, however, shows that commentators have exaggerated the legislative veto’s significance as a result of their incorrect assumption that the separation of powers was designed solely to check governmental authority. The Framers also designed constitutional structure to empower the new national government, institutionalizing a division of labor among the three branches in order to enhance the government’s capacity.


By examining the legislative vetoes governing the FTC, the Department of Education, and the president’s authority to extend most-favored-nation trade status, Korn demonstrates how the powers that the Constitution grants to Congress made the legislative veto short-cut inconsequential to policymaking. These case studies also show that Chadha enhanced Congress’s capacity to pass substantive laws while making it easier for Congress to preserve important discretionary powers in the executive branch. Thus, in debunking the myth of the legislative veto, Korn restores an appreciation of the enduring vitality of the American constitutional order.

Jessica Korn, a Freedom Forum Fellow (1997-1998), is an Adjunct Professor of Business at Columbia University.

"Jessica Korn has done a masterful and convincing job of pointing out some common misconceptions about the way our Constitutional separation of powers works and what the well-known Supreme Court decision in INS v. Chadha actually accomplished."—Derek Bok, Harvard University

"In this superb study, Jessica Korn not only explodes several myths about the legislative veto, but captures many timeless truths about America's Madisonian system of governance. The story is fascinating and the news is good: American government can adapt to new challenges without weakening the separation of powers.... Scholars, journalists, students, and average citizens who care about the future of American politics ought to read this book."—John J. DiIulio, Jr., Princeton University/Brookings Institution