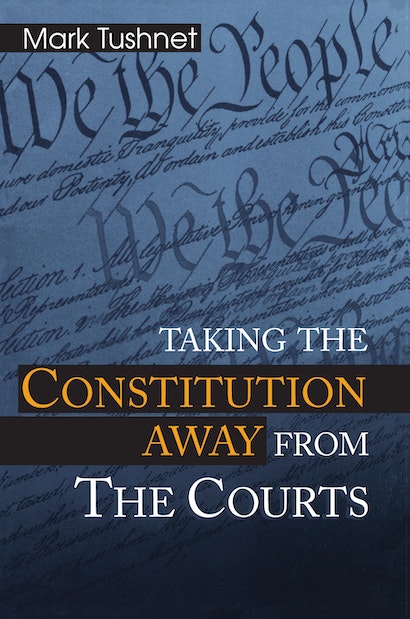 Here a leading scholar in constitutional law, Mark Tushnet, challenges hallowed American traditions of judicial review and judicial supremacy, which allow U.S. judges to invalidate “unconstitutional” governmental actions. Many people, particularly liberals, have “warm and fuzzy” feelings about judicial review. They are nervous about what might happen to unprotected constitutional provisions in the chaotic worlds of practical politics and everyday life. By examining a wide range of situations involving constitutional rights, Tushnet vigorously encourages us all to take responsibility for protecting our liberties. Guarding them is not the preserve of judges, he maintains, but a commitment of the citizenry to define itself as “We the People of the United States.” The Constitution belongs to us collectively, as we act in political dialogue with each other — whether in the street, in the voting booth, or in the legislature as representatives of others.


Tushnet urges that we create a “populist” constitutional law in which judicial declarations deserve no special consideration. But he warns that in so doing we must pursue reasonable interpretations of the “thin Constitution” — the fundamental American principles embodied in the Declaration of Independence and the Preamble to the Constitution. A populist Constitution, he maintains, will be more effective than a document exclusively protected by the courts. Tushnet believes, for example, that the serious problems of the communist scare of the 1950s were aggravated when Senator Joseph McCarthy’s opponents were lulled into inaction, believing that the judicial branch would step in and declare McCarthy’s actions unconstitutional. Instead of fulfilling the expectations, the Court allowed McCarthy to continue his crusade until it was ended. Tushnet points out that in this context and in many others, errors occurred because of the existence of judicial review: neither the People nor their representatives felt empowered to enforce the Constitution because they mistakenly counted on the courts to do so. Tushnet’s clarion call for a new kind of constitutional law will be essential reading for constitutional law experts, political scientists, and others interested in how and if the freedoms of the American Republic can survive into the twenty-first century.

"A valuable addition to the swelling chorus of 'judicial review' skeptics. . . . a book-length defense of this interesting heresy."—Richard Posner, The New Republic

"Tushnet . . . makes a bold and compelling argument against judicial review as the primary means of constitutional reform, arguing that this tradition takes lawmaking out of the hands of the people and relinquishes it to the courts."—Booknews

"[Tushnet's] ideas will challenge and inform academics, lawyers, and college students interested in the foundations of the American political system. . . . This bold analysis for 21st-century constitutional interpretation is highly recommended."—Library Journal

"Both at the turn of the last century and at the turn of this one, the American courts have shown that they are willing to stand shoulder-to-shoulder with those who oppose progressive reform. Mark Tushnet's work is a welcome sign that at last the tide is beginning to turn, and that American law professors are no longer willing to be complicit in this obstructionism."—Jeremy Waldron, Times Literary Supplement

"A major work-a potential classic that promises also to be an academic bestseller. . . . Tushnet demonstrates that the case for judicial review and thick constitutionalism is far, far more complex than previous theorists have recognized. Any person who wants to defend those principles in the future will have to deal with the claims of this book."—Mark Graber, University of Maryland