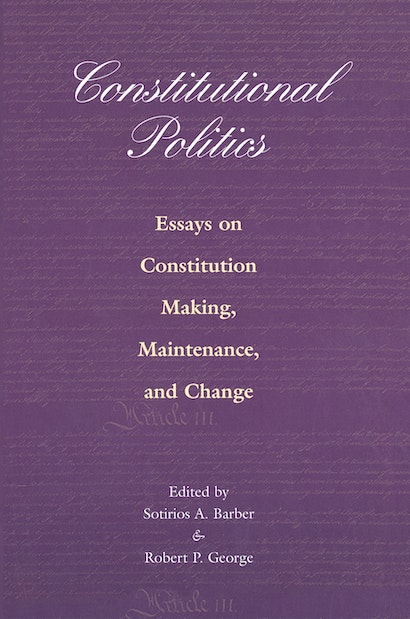 What does it mean to have a constitution? Scholars and students associated with Walter Murphy at Princeton University have long asked this question in their exploration of constitutional politics and judicial behavior. These scholars, concerned with the making, maintenance, and deliberate change of the Constitution, have made unique and significant contributions to our understanding of American constitutional law by going against the norm of court-centered and litigation-minded research. Beginning in the late 1970s, this new wave of academics explored questions ranging from the nature of creating the U.S. Constitution to the philosophy behind amending it.


In this collection, Sotirios A. Barber and Robert P. George bring together fourteen essays by members of this Princeton group — some of the most distinguished scholars in the field. These works consider the meaning of having a constitution, the implications of particular choices in the design of constitutions, and the meaning of judicial supremacy in the interpretation of the Constitution. The overarching ambition of this collection is to awaken a constitutionalist consciousness in its readers — to view themselves as potential makers and changers of constitutions, as opposed to mere subjects of existing arrangements.

"All essays provide interesting insight into the concepts of judicial review and judicial activism. [An] excellent book. I highly recommend it to all."—Ruth Ann Wary, Law and Politics Book Review

"A provocative, enlightening, and creative study of the intricacies and fragilities of constitutionalism in the modern day."—Choice

"Under the leadership of Walter F. Murphy, the Princeton School has redefined the central concerns of public law. Eschewing a reductive focus on 'judicial behavior,' while refusing merely to echo the legal academy, it has concerned itself with a more fundamental, far-reaching, and interesting set of questions—the meaning and worth constitutionalism, its preconditions, and the way of life it fosters. The Princeton School has thus reconnected public law with political theory and returned political science to a mode of discourse shared by citizens."—Stanley C. Brubaker, Colgate University.