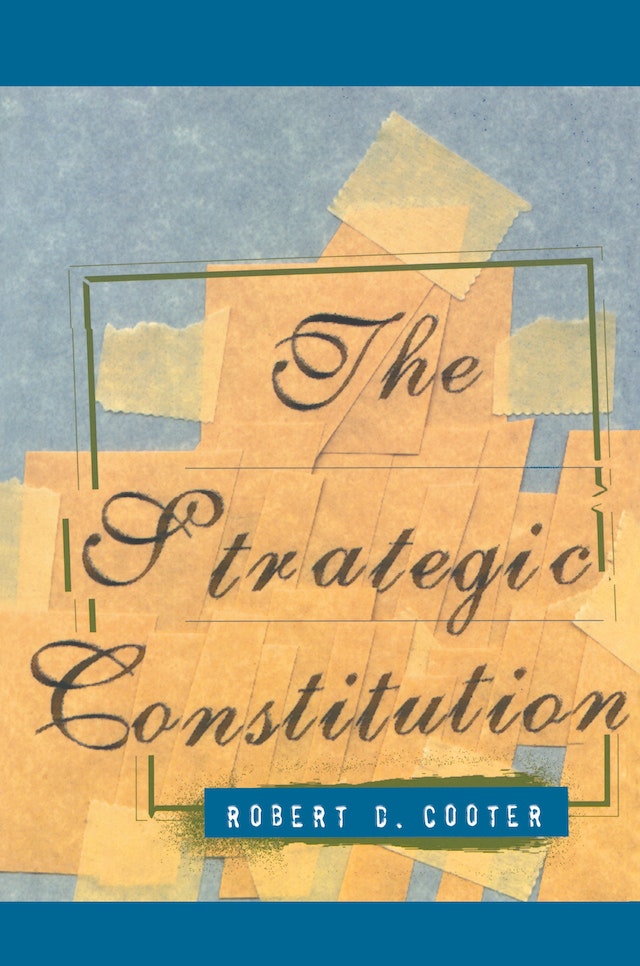 Making, amending, and interpreting constitutions is a political game that can yield widespread suffering or secure a nation’s liberty and prosperity. Given these high stakes, Robert Cooter argues that constitutional theory should trouble itself less with literary analysis and arguments over founders’ intentions and focus much more on the real-world consequences of various constitutional provisions and choices. Pooling the best available theories from economics and political science, particularly those developed from game theory, Cooter’s economic analysis of constitutions fundamentally recasts a field of growing interest and dramatic international importance.


By uncovering the constitutional incentives that influence citizens, politicians, administrators, and judges, Cooter exposes fault lines in alternative forms of democracy: unitary versus federal states, deep administration versus many elections, parliamentary versus presidential systems, unicameral versus bicameral legislatures, common versus civil law, and liberty versus equality rights. Cooter applies an efficiency test to these alternatives, asking how far they satisfy the preferences of citizens for laws and public goods.


To answer Cooter contrasts two types of democracy, which he defines as competitive government. The center of the political spectrum defeats the extremes in “median democracy,” whereas representatives of all the citizens bargain over laws and public goods in “bargain democracy.” Bargaining can realize all the gains from political trades, or bargaining can collapse into an unstable contest of redistribution. States plagued by instability and contests over redistribution should move towards median democracy by increasing transaction costs and reducing the power of the extremes. Specifically, promoting median versus bargain democracy involves promoting winner-take-all elections versus proportional representation, two parties versus multiple parties, referenda versus representative democracy, and special governments versus comprehensive governments.


This innovative theory will have ramifications felt across national and disciplinary borders, and will be debated by a large audience, including the growing pool of economists interested in how law and politics shape economic policy, political scientists using game theory or specializing in constitutional law, and academic lawyers. The approach will also garner attention from students of political science, law, and economics, as well as policy makers working in and with new democracies where constitutions are being written and refined.

Robert D. Cooteris Herman F. Selvin Professor of Law at Boalt Hall, University of California, Berkeley. He is past president of the American Law and Economics Association and has published extensively in both fields. He is coauthor, with Thomas Ulen, of the widely translated texbook, Law and Economics.

"For anyone looking for a textbook that provides a systematic introduction to the economic analysis of constitutional law in an accessible manner while covering a wide range of topics, it would . . . be hard to find a more suitable book. . . . [It] will encourage students to think about constitutional analysis from a new perspective in an engaging way."—Georg Vanberg, Law and Politics Book Review

"Cooter has written a very useful book. . . . It is important to identify the general principles—the engineering principles if you like—that underlie the structure of effective constitutions. And that is just what the author has done."—Michael C. Munger, Regulation

"A clear and comprehensive introduction to modern work in political economy and rational choice as it applies to the strategic analysis of government structure. The book blends normative and positive concerns in an enlightening way. . . . The book has an admirable emphasis on constitutional structure and on the strategic opportunities created by alternative ways of organizing government."—Susan Rose-Ackerman, Political Science Quarterly

"A tour de force through a large number of fields of economic theory, ranging from social choice to fiscal federalism, written by one of the most distinguished fellows of the law-and-economics branch of professionalism."—Journal of Economics

"Robert D. Cooter has written a marvelous book. The Strategic Constitution is truly a tour de force, applying economic analysis to virtually the full range of constitutional issues that arise in a democracy and doing so in a way that is both engaging and sprinkled with humor. . . . The book deserves to be standard reading for those with a serious interest in the fit between constitutions and democratic values."—Stephen Brooks, Democratization

"This is a superb synthesis, application, and extension of four decades of research in economics and political science on the effects of formal political institutions on economics, law, and politics. Cooter is extraordinarily adept at crossing the disciplinary boundaries among economics, law, and politics. The book will be a wonderful textbook for advanced undergraduates and graduate students in the three disciplines. Moreover, many of Cooter's original arguments will generate considerable interest among leading social scientists as well. The scope of the book is simply breathtaking."—Geoffrey Garrett, Yale University

"I found this book to be incredibly stimulating. The field of law and economics is always a provocative source of ideas, forcing even the most reluctant consumer to rethink her own views and be more precise about articulating them as she works out a reply to the economic analysis on offer. Cooter's analyses of constitutional law problems are no exception to this, and any good student or sophisticated reader will develop ideas or arguments that are much better grounded for having thought his analyses through."—Bruce Chapman, University of Toronto