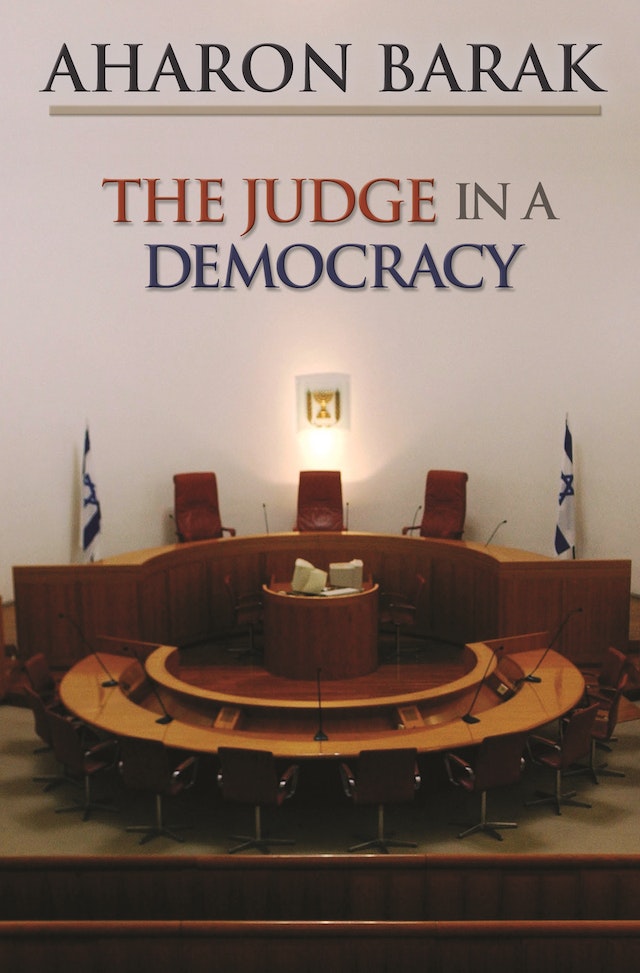 Whether examining election outcomes, the legal status of terrorism suspects, or if (or how) people can be sentenced to death, a judge in a modern democracy assumes a role that raises some of the most contentious political issues of our day. But do judges even have a role beyond deciding the disputes before them under law? What are the criteria for judging the justices who write opinions for the United States Supreme Court or constitutional courts in other democracies? These are the questions that one of the world’s foremost judges and legal theorists, Aharon Barak, poses in this book.


In fluent prose, Barak sets forth a powerful vision of the role of the judge. He argues that this role comprises two central elements beyond dispute resolution: bridging the gap between the law and society, and protecting the constitution and democracy. The former involves balancing the need to adapt the law to social change against the need for stability; the latter, judges’ ultimate accountability, not to public opinion or to politicians, but to the “internal morality” of democracy.


As he explores these questions, Barak also traces how supreme courts in major democracies have evolved since World War II, and he guides us through many of his own decisions to show how he has tried to put these principles into action, even under the burden of judging on terrorism.

Aharon Barak is President of the Supreme Court of Israel. He is the author of Judicial Discretion (1989), Purposive Interpretation in Law (Princeton, 2005), several books in Hebrew, and numerous articles in English-language law journals.

"Aharon Barak [states] that it is precisely because judges are not politicians that they are the right people to undertake the constitutional role of ensuring that the legislature and the executive comply with legal requirements. . . . Barak points out that tension between the courts and other branches of government is natural and it is desirable. If the courts' decisions were always welcomed by the executive, judges would not be doing their job properly. Barak's thesis is . . . of fundamental importance."—David Pannick, Times of London

"Learned and perceptive, this work deserves the attention of any reader interested in the role that judges play, and ought to play, in a democratic republic."—Charles Gardner Geyh, Trial

"Barak sets out in a systematic way, the questions, dilemmas and solutions he has adopted as a judge. He notes the principles that should guide judges in a democratic society, when faced with constitutional questions that have implications over and above the specific concerns of the parties to a legal disput. . . . [E]ngaging and intellectually stimulating. . . . The Judge in a Democracy should be a must read in any course or research on judicial and constitutional politics."—Menachem Hofnung, Law and Politics Book Review

"Barak argues for striking a balance between the protection of human rights and the preservation of national security interests, but is most adamant in insisting that some degree of security might have to be sacrificed in order to preserve a nation's democratic essence.... Barak has done much to humanize the role of the judge. He describes the process of interpreting law as a profoundly human one, in which the adjudicator is constantly balancing, testing, agonizing."—Benjamin Soskis, Forward

"The Judge in a Democracy explains that there was nothing in either the US or the Israeli constitutions allowing judges to strike down acts of the legislature. Even so, he says, the courts in both countries have held that judicial review of legislation is implied by interpretation of the constitution."—Joshua Rozenberg, Daily Telegraph

"Presenting a remarkably balanced view of the power and limitations of judges, President Barak offers a comprehensive yet humble account of the role of the judiciary within a democratic society."—Harvard Law Review

"Barak's writing is not merely clear, it exudes the logical structure that the modern law endeavors, and often claims, to exhibit. . . . For the professional of law . . . Barak's book may serve as the beginning of a revealing look at the social role of the law."—Mathieu Deflem, European Legacy

"This book offers a plethora of intriguing examples of practical reason in the service of an eclectic mix of justice ethically conceived and of law as a body of rules and principles that bind us even when power is lacking to enforce those norms. Few jurists in the world have regularly confronted the kinds of seemingly impossible conundrums that Barak has with amazing frequency managed to turn into surprisingly agreeable outcomes."—Laurence Tribe, Harvard University, author of American Constitutional Law

"A remarkable work by a remarkable jurist. A most important contribution to our understanding of the role of a judiciary in a democracy, this book will be of wide appeal to judges, legal scholars, and law students, as well as political theorists and others interested in the law and legal institutions."—Frank Iacobucci, retired Justice of the Supreme Court of Canada

"This book provides a candid and elaborate account by a leading supreme court justice on his craft of judging. Aharon Barak discusses some of the most important (and controversial) jurisprudential questions and demonstrates the ways in which he has put his convictions on these matters into action in shaping Israeli jurisprudence. As such, The Judge represents a valuable encounter of legal theory and judicial practice. Judges and scholars associated with new constitutional courts will find the book instructive. American judges and scholars, in turn, will see it as a powerful antithesis to the approach of another prominent jurist, Justice Antonin Scalia of the United States Supreme Court."—Hanoch Dagan, Tel-Aviv University Faculty of Law School, author of The Law and Ethics of Restitution