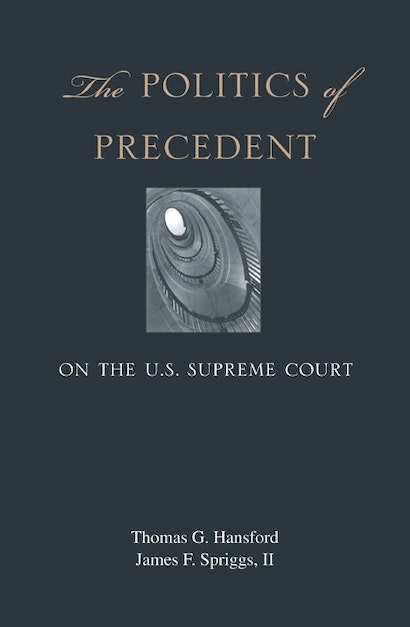 The Politics of Precedent on the U.S. Supreme Court offers an insightful and provocative analysis of the Supreme Court’s most important task — shaping the law. Thomas Hansford and James Spriggs analyze a key aspect of legal change: the Court’s interpretation or treatment of the precedents it has set in the past. Court decisions do not just resolve immediate disputes; they also set broader precedent. The meaning and scope of a precedent, however, can change significantly as the Court revisits it in future cases. The authors contend that these interpretations are driven by an interaction between policy goals and variations in the legal authoritativeness of precedent. From this premise, they build an explanation of the legal interpretation of precedent that yields novel predictions about the nature and timing of legal change.


Hansford and Spriggs test their hypotheses by examining how the Court has interpreted the precedents it set between 1946 and 1999. This analysis provides compelling support for their argument, and demonstrates that the justices’ ideological goals and the role of precedent are inextricably linked. The two prevailing, yet contradictory, views of precedent — that it acts either solely as a constraint, or as a “cloak” that never actually influences the Court — are incorrect. This book shows that while precedent can operate as a constraint on the justices’ decisions, it also represents an opportunity to foster preferred societal outcomes.

"[This book] emphasize[s] the notion that judges' behavior is not purely policy driven, but rather must be evaluated in the light of other institutional and personal factors that may shape behavior beyond attitudes. . . . [T]he influence of institutional factors (in the form of the importance of institutional legitimacy) has an instrumental or even strategic component: the justices recognize that to render their policy pronouncements most effective, they must cite vital precedent."—Stefanie A. Lindquist, Law and Politics Book Review

"The authors have done a commendable job in showing how both law and politics matter when the Supreme Court interprets precedent. . . . [Their] uncluttered explanation of the substance of their theory and findings makes The Politics of Precedent accessible to any student of the Supreme Court."—Mark S. Hurwitz, Political Science Quarterly

"There is much to like in this book. The empirical analysis is carefully executed and accessible even to those without training in higher-level statistics.... [This book] will be of interest to scholars of the judiciary, and [it] will be cited regularly and routinely assigned in graduate classes in judicial politics."—Chris W. Bonneau, Perspectives on Politics

"This is the most important book ever written regarding legal change in the Supreme Court. It will change the dialogue on this topic. The authors address a crucial question and relate it to two of the three theoretical models that currently interest Supreme Court scholars."—Saul Brenner, University of North Carolina, Charlotte, coauthor of Stare Indecisis: Alteration of Precedent on the Supreme Court, 1946-1992

"This book makes an important contribution to the understanding of judicial behavior. Its authors carefully develop their theory and apply it to the treatment of precedent in an elegant way that leads to clear predictions about the Supreme Court's behavior."—Lawrence Baum, Ohio State University, author of The Supreme Court and American Courts: Process and Policy