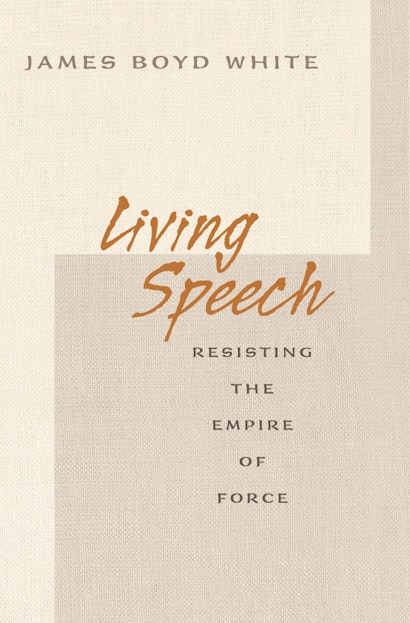 Language is our key to imagining the world, others, and ourselves. Yet sometimes our ways of talking dehumanize others and trivialize human experience. In war other people are imagined as enemies to be killed. The language of race objectifies those it touches, and propaganda disables democracy. Advertising reduces us to consumers, and clichés destroy the life of the imagination.


How are we to assert our humanity and that of others against the forces in the culture and in our own minds that would deny it? What kind of speech should the First Amendment protect? How should judges and justices themselves speak? These questions animate James Boyd White’s Living Speech, a profound examination of the ethics of human expression — in the law and in the rest of life.


Drawing on examples from an unusual range of sources — judicial opinions, children’s essays, literature, politics, and the speech-out-of-silence of Quaker worship — White offers a fascinating analysis of the force of our languages. Reminding us that every moment of speech is an occasion for gaining control of what we say and who we are, he shows us that we must practice the art of resisting the forces of inhumanity built into our habits of speech and thought if we are to become more capable of love and justice — in both law and life.

James Boyd White is Hart Wright Professor of Law, Professor of English, and Adjunct Professor of Classical Studies at the University of Michigan. His books include The Legal Imagination and The Edge of Meaning.

"In Living Speech, White is rooted in his own proper study of the law, but he 'blurs' his work over in many directions, notably to classical drama, poetry, and philosophy, even with indirect traces and hints of theology. The effect is to summon readers—especially, but by no means exclusively, students of law—beyond the conventional limits and procedures of their discipline. . . . His book is an exercise in the humanities of a wise and urgent kind."—Walter Brueggeman, Michigan Law Review

"Living Speech provides readers with White's usual insights on the rhetorical power of language, ferreting out its influence through a range of life-constituting (or life-draining) texts that include examples from legal decisions, classical Greek drama, Plato, as well as poetry from Shakespeare, Dante, William Carlos Williams, and Robert Frost. . . . His passionate commitment to the struggle to recognize and to preserve the richness of our humanity and the need for human freedom and solidarity is inspiring."—Omar Swartz, Rhetoric Review

"This is a book about disrespect—and about the benefits of practicing it.... This is a compelling book—an appropriate tract for our times that deserves widespread and careful reading in an era deeply infected by the linguistic plagues James Boyd White disinfects through disrespect."—Thomas Holbrook, Federal Lawyer

"Drawing from a variety of examples, such as literature, judicial opinions, children's essays, Greek tragedy, and political correspondence, this book analyzes the force of language. White argues that speech is inherently objectifying, and every speech act is an occasion for gaining control of who we are and what we proclaim."—Law & Social Inquiry

"White is an interdisciplinary scholar who speaks to those interested in law, politics, literature, and ethics. His argument offers a way of understanding the present poverty of public discourse, and he invites individual citizens to speak more frankly, more openly , and with more candor in order to articulate their experience in ways that more fully present their own thinking rather than repeating political clichés. This can undo totalitarianisms of various kinds. Living Speech is an important book for thinking about how we speak with each other about justice, and so it is valuable to academics but also to leaders. In this work, White is both a scholar and a public intellectual."—Eloise A. Buker, Perspectives on Politics

"This is a magisterial work, evidencing the unique breadth of White's mastery of the worlds of law, language, and classical studies. It continues his immensely productive and path-breaking inquiry into the relations among legal texts, literary works, and the philosophical and political premises of human discourse."—Howard Lesnick, University of Pennsylvania

"What we know of the ethical uses of language in law, we know largely because of White's labors."—Robin West, Georgetown University