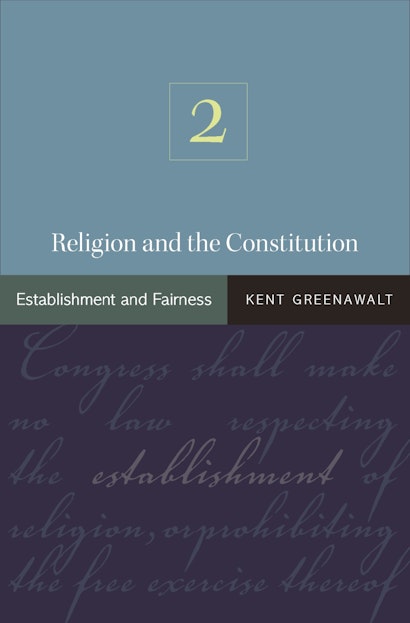 Balancing respect for religious conviction and the values of liberal democracy is a daunting challenge for judges and lawmakers, particularly when religious groups seek exemption from laws that govern others. Should students in public schools be allowed to organize devotional Bible readings and prayers on school property? Does reciting “under God” in the Pledge of Allegiance establish a preferred religion? What does the Constitution have to say about displays of religious symbols and messages on public property? Religion and the Constitution presents a new framework for addressing these and other controversial questions that involve competing demands of fairness, liberty, and constitutional validity.


In this second of two major volumes on the intersection of constitutional and religious issues in the United States, Kent Greenawalt focuses on the Constitution’s Establishment Clause, which forbids government from favoring one religion over another, or religion over secularism. The author begins with a history of the clause, its underlying principles, and the Supreme Court’s main decisions on establishment, and proceeds to consider specific controversies. Taking a contextual approach, Greenawalt argues that the state’s treatment of religion cannot be reduced to a single formula.


Calling throughout for acknowledgment of the way religion gives meaning to people’s lives, Religion and the Constitution aims to accommodate the maximum expression of religious conviction that is consistent with a commitment to fairness and the public welfare.

Kent Greenawalt is University Professor at Columbia University, teaching in the law school, and a former Deputy Solicitor General of the United States. His books include Does God Belong in Public Schools? and Fighting Words (both Princeton), as well as Conflicts of Law and Morality and Religious Convictions and Political Choice.

"[S]tudents, law clerks, scholars, and interested citizens seeking a fair-minded dissection of the complexities of any given issue can easily dip into the two volumes and find much of value. In particular, Greenawalt's chapter on 'Establishment Clause Tests and Standards' provides as succinct an introduction to the twists of case law as currently available."—Aziz Huq, New York Law Journal

"The comprehensiveness of Greenawalt's treatment makes for a book that, though more than a conventional treatise, should be valuable for use in the way treatises are employed. This is not the sort of book that many readers will want to sit down and read cover-to-cover. But for a careful, fair-minded analysis of the cases and arguments with respect to virtually any establishment controversy that a judge or scholar may be investigating, one could hardly do better than to consult Greenawalt's treatment. And his relevant chapters ought to be mandatory reading for any student who wants to write a seminar paper or law review comment on a religion clause topic."—Steven D. Smith, Harvard Law Review

"Greenawalt's approach illuminates a range of issues in political theory. It will be especially useful for theorists interested in questions relating to identity, culture, and religion."—Alan Patten, Perspectives on Politics

"Justice: Rights and Wrongs is a major contribution to political and legal theory. A short review cannot give more than a taste of the breadth, rigour and sophistication of the arguments. It is certainly worthy of our respect and deserves to be widely read and debated."—Ian Leigh, Ecclesiastical Law Journal

"This is the most important work on the Establishment Clause in the literature and it will remain so for a long time to come. Virtually every chapter breaks new ground."—Steven H. Shiffrin, Cornell University

"This is a superb overview of a broad range of First Amendment issues from a powerful analytic mind with a profound knowledge of the field."—Andrew Koppelman, Northwestern University