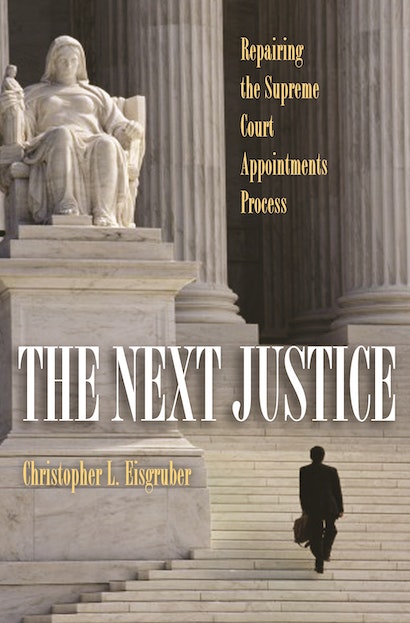 The Supreme Court appointments process is broken, and the timing couldn’t be worse — for liberals or conservatives. The Court is just one more solid conservative justice away from an ideological sea change — a hard-right turn on an array of issues that affect every American, from abortion to environmental protection. But neither those who look at this prospect with pleasure nor those who view it with horror will be able to make informed judgments about the next nominee to the Court — unless the appointments process is fixed now. In The Next Justice, Christopher Eisgruber boldly proposes a way to do just that. He describes a new and better manner of deliberating about who should serve on the Court — an approach that puts the burden on nominees to show that their judicial philosophies and politics are acceptable to senators and citizens alike. And he makes a new case for the virtue of judicial moderates.

Long on partisan rancor and short on serious discussion, today’s appointments process reveals little about what kind of judge a nominee might make. Eisgruber argues that the solution is to investigate how nominees would answer a basic question about the Court’s role: When and why is it beneficial for judges to trump the decisions of elected officials? Through an examination of the politics and history of the Court, Eisgruber demonstrates that pursuing this question would reveal far more about nominees than do other tactics, such as investigating their views of specific precedents or the framers’ intentions.

Written with great clarity and energy, The Next Justice provides a welcome exit from the uninformative political theater of the current appointments process.

Christopher L. Eisgruber is president of Princeton University. He is the coauthor of Religious Freedom and the Constitution and the author of Constitutional Self-Government. He is a former New York University law professor and a former clerk for Supreme Court Justice John Paul Stevens and U.S. Court of Appeals Judge Patrick E. Higginbotham. 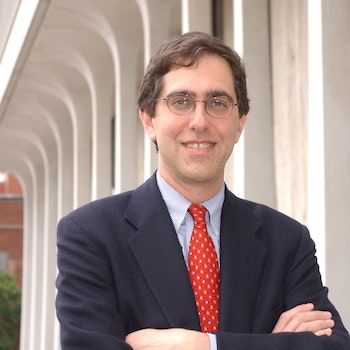 "What do we want in a Supreme Court Justice, and how should we get it? Eisgruber, a former Supreme Court clerk, argues that the first step is to do away with the idea that the process can or should be entirely divorced from politics...Eisgruber's practical recommendations for fixing the confirmation process boil down to having senators stand up for themselves during hearings, unafraid to say no, but his larger point is that, in pursuit of justice, moderation is the paramount virtue."—The New Yorker

"[A] concise and lucid case for a more thoughtful and workable process."—Publishers Weekly

"The focus of the book...is not on jurisprudence, but on the inadequacy of senatorial confirmation hearings.... Eisgruber recommends that the Senate correct the confirmation process by following the example of the executive branch. Thus, the Senate should 'rely less on hearings and more on the kinds of evidence that presidents use': writings, speeches, and, for nominees who are judges, opinions. He continues that the Senate should not rely on futile inquiries about a nominee's commitment to strict construction of statutes or finding the original intent of the founding fathers. Instead, he suggests that the Senate ask nominees about their interpretation of abstract language in the U.S. Constitution...[This] is a thinking person's book. Anyone concerned about the future of the U.S. Supreme Court, however, will find it fascinating. Elegantly written, closely reasoned, and carefully researched, the book is well worth the reader's thought and time. Whether or not you agree with Eisgruber's suggestions and conclusions, The Next Justice remains stimulating, even provocative."—Stewart Pollock, Newark Star Ledger

"Eisgruber's analysis is essential reading for both lawmakers and the public."—Deirdre Sinnott, Foreword Magazine

"The appointment process could gain a lot from Mr. Eisgruber's proposal...The Next Justice makes a start, in the calm before the circus of the next nomination, toward the debate we must have if we are to overcome the 'confusion'."—Daniel Sullivan, New York Sun

"The Next Justice should be a required reading for all the members of the Senate Judiciary Committee, so insightful and informative is Eisgruber's analysis of this profoundly important subject. For decades the nation has been wrestling with the question of how to avoid cyclical partisan warfare over Supreme Court appointments. This book goes a long way toward defining sensible, balanced criteria for doing so."—Ronald Goldfarb, Washington Lawyer

"The Next Justice contains many interesting descriptions of the Court, including its inner workings, the role of the law clerks, and the process of decision-making. Eisgruber has a great deal of respect for the Supreme Court as an institution, and he would like to have a confirmation process worthy of the Court. So would we all."—Charles S. Doskow, The Federal Lawyer

"While readers may disagree with how Eisgruber defines the term 'moderate justice,' no one who has even a passing interest in the composition of the Court should find Eisgruber's book anything less than thought-provoking. In fact, it should be required reading for any college constitutional law class and for first-year law students."—E. Drew Britcher, Trial

"As Australian governments venture tentatively towards greater transparency, Eisgruber's text is a useful reminder of the dangers they need to avoid. In the end, he suggests that reforms depend upon an appeal to the political process to lift its game."—Michael Kirby, Australian Law Journal

"[Eisgruber's] volume is a sensible, illuminating, and sometimes insightful look at the confirmation process. . . . For a subject that can be emotionally charged, the author has provided an account that is eminently readable and informative, one that is entirely manageable and digestible in an evening."—Donald Grier Stephenson, Jr., Journal of Supreme Court History

"What an important book this is! With the next president likely to have at least one Supreme Court vacancy to fill—an appointment that could make a dramatic difference in the nation's direction for years to come—Christopher Eisgruber lays out a clear set of principles not only for the White House selection process but, more importantly, for Senate confirmation. And Eisgruber's focus is not just on the immediate policy impact; his goal is nothing less than to preserve the Constitution."—Mickey Edwards, vice president of The Aspen Institute

"In this sensible and deeply considered book, Christopher Eisgruber tackles one of the most vexatious problems in contemporary American constitutionalism: what to do about the ever more perilous enterprise of Supreme Court nominations. Carefully avoiding a breathless, sensationalist approach to explaining how the Court really works, The Next Justice provides a measured account of how the modern Court has operated and the interpretive doctrines the justices apply. Eisgruber is deeply respectful of the Court, but his expectations of the Senate's role in judicial confirmations also run high. To everyone who worries that the nomination process has become a perverse caricature of what it should be, this book offers a thoughtful and compelling set of proposals for how it might yet be reformed."—Jack Rakove, Stanford University

"A superb and provocative treatment of a complex topic. Everyone interested in the future of the Supreme Court, and the nature of constitutional law, will benefit from Eisgruber's careful and exceptionally illuminating analysis."—Cass R. Sunstein, University of Chicago Law School

"After so many years of speaking past one another on the issue, members of the public now have, in The Next Justice, a new common language with which to discuss the qualifications of Supreme Court nominees. Unapologetically written with a clarity and transparency appropriate for the most general audience, it is a book from which everyone—including law professors, legislators, and judges themselves—can learn. With it, Christopher Eisgruber has established himself, along with giants like Ronald Dworkin and Cass Sunstein, among the important public intellectuals of our time."—Rebecca L. Brown, Vanderbilt Law School

"Eisgruber's book is vital. The process by which the public and the Senate currently consider Supreme Court nominees is broken. A fresh view is badly needed. The Next Justice provides this, and it has the potential to serve as a handbook to the next confirmation hearing. For all its erudition, the book is clear, brief, and well designed for nonlawyers. It doesn't go too far to predict that the next nominee will be asked many, if not all, of the questions that Eisgruber proposes."—Martin S. Flaherty, Fordham Law School

"Clearly written and containing many original ideas, this is an excellent book that I have no doubt will be widely read. I particularly enjoyed the chapter on the extent of unanimous Supreme Court rulings and what this means for understanding the role of ideology on the court."—Erwin Chemerinsky, Duke Law School