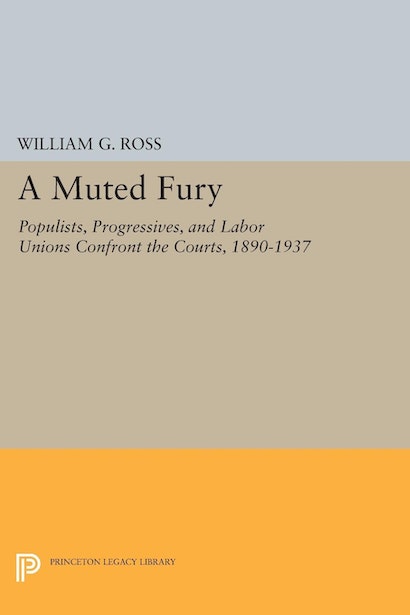 For half a century before 1937, populists, progressives, and labor leaders complained bitterly that a “judicial oligarchy” impeded social and economic reform by imposing crippling restraints on trade unions and nullifying legislation that regulated business corporations. A Muted Fury, the first study of this neglected chapter in American political and legal history, explains the origins of hostility toward the courts during the Progressive Era, examines in detail the many measures that antagonists of the judiciary proposed for the curtailment of judicial power, and evaluates the successes and failures of the anti-court movements.

Tapping a broad array of sources, including popular literature and unpublished manuscripts, William Ross demonstrates that this widespread fury against the judiciary was muted by many factors, including respect for judicial power, internal divisions among the judiciary’s critics, institutional obstacles to reform, and the judiciary’s own willingness to mitigate its hostility toward progressive legislation and labor. Ross argues that persistent criticism of the courts influenced judicial behavior, even though the antagonists of the courts failed in their many efforts to curb judicial power. The book’s interdisciplinary exploration of the complex interactions among politics, public opinion, judicial decision-making, the legislative process, and the activities of organized interest groups provides fresh insights into the perennial controversy over the scope of judicial power in America.

"A Muted Fury is extensively and resourcefully researched and gracefully written."—Constitution

"A Muted Fury provides a comprehensive overview of the various proposals and moves made to curb the court.... A useful overview grounded in research findings over the last half-century with rich footnotes and a useful index."—Choice

"A fascinating account of an often neglected but critical era of American political and legal history, namely 1890 through 1937. By tracing the changing nature of judicial reform movements, Ross provides an excellent contribution to the burgeoning field of social movements and state power broadly conceived."—Victoria Hattam, Yale University