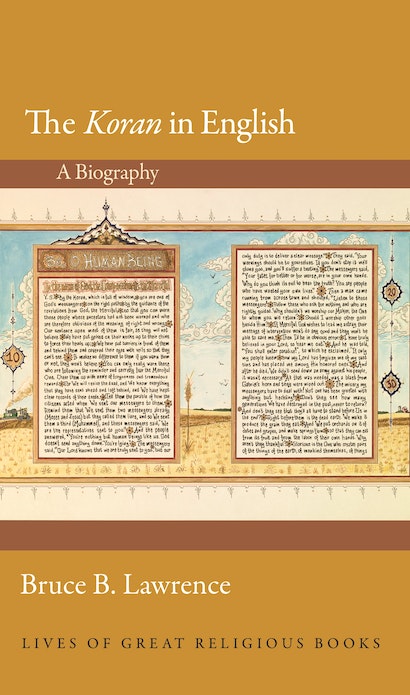 For millions of Muslims, the Qur’an is sacred only in Arabic, the original Arabic in which it was revealed to the Prophet Muhammad in the seventh century; to many Arab and non-Arab believers alike, the book literally defies translation. Yet English translations exist and are growing, in both number and importance. Bruce Lawrence tells the remarkable story of the ongoing struggle to render the Qur’an’s lyrical verses into English—and to make English itself an Islamic language.

The “Koran” in English revisits the life of Muhammad and the origins of the Qur’an before recounting the first translation of the book into Latin by a non-Muslim: Robert of Ketton’s twelfth-century version paved the way for later ones in German and French, but it was not until the eighteenth century that George Sale’s influential English version appeared. Lawrence explains how many of these early translations, while part of a Christian agenda to “know the enemy,” often revealed grudging respect for their Abrahamic rival. British expansion in the modern era produced an anomaly: fresh English translations—from the original Arabic—not by Arabs or non-Muslims but by South Asian Muslim scholars.

The first book to explore the complexities of this translation saga, The “Koran” in English also looks at cyber Korans, versions by feminist translators, and now a graphic Koran, the American Qur’an created by the acclaimed visual artist Sandow Birk.

Bruce B. Lawrence is the Nancy and Jeffrey Marcus Humanities Professor Emeritus of Religion at Duke University. His many books include Who Is Allah?; New Faiths, Old Fears: Muslims and Other Asian Immigrants in American Religious Life; and Shattering the Myth: Islam beyond Violence (Princeton). He lives in Hillsborough, North Carolina.

"Comprehensive. . . . Lawrence has done pathbreaking work for English-speaking students of the Qur'an."—Publishers Weekly

"Lively, open-minded and erudite. . . . You don't have to be a Muslim or all that religiously inclined to find this book, the latest installment in the sprightly Princeton University Press series called ‘Lives of Great Religious Books,' delightful reading."—Patrick Reardon, Chicago Tribune

"Exploring the motivations, reactions, and inspirations for other activities makes this work not only unique but also valuable for those trying to evaluate the discussions surrounding translations of the Koran."—Muhammed Hassanali, Booklist

"Lawrence makes the story of the Qur'an in English as informative as it is fascinating."—Jack Miles, Los Angeles Review of Books

"Lawrence's book is essential for anyone interested in the emergence of world sacred texts. It is clear and comprehensive about the place of the Koran among such texts and balanced in its engrossing narrative line."—Frederick Quinn, Anglican and Episcopal History

"Provocatively-written, deftly-researched, and a pleasure to read, The Koran in English opens up many promising pathways and novel directions for future research."—Khairudin Aljunied, American Journal of Islamic Social Science

"What is most striking and gratifying about this work is a fair and accurate depiction of the textual history of the Qur’an and of the Prophet Muhammad (peace be upon him) as its recipient and teacher."—Abdur Raheem Kidawi, Muslim World Book Review

"At a moment when historically grounded reflection on European and American interactions with Islam and Muslims is vital, Bruce Lawrence offers an engaging and opinionated book based on wide-ranging scholarship. Accessible to adventurous beginners and illuminating for specialists, The "Koran" in English is a terrific read."—Kecia Ali, author of Sexual Ethics and Islam: Feminist Reflections on Qur'an, Hadith, and Jurisprudence

"Lawrence's lively and fascinating study ranges well beyond textual history. It probes the international politics of Qur’an publication and even showcases the recently completed graphic Qur’an of American artist Sandow Birk. There is nothing like this book."—Jane Dammen McAuliffe, editor of the Encyclopaedia of the Qur’an

"Bruce Lawrence's The "Koran" in English is a masterful reception history of the Muslim scripture. A scripture is always a scripture to someone, and Lawrence takes us on a magical, erudite journey through the centuries. Here we see the Qur’an not as a text that floats above time and place, but read, internalized, contested, and engaged by a host of believers, scholars, mystics, artists, and polemicists. A rich and engaging read that could only come from the pen of one of the most brilliant and humane scholars of our time. Enthusiastically recommended for both scholarly audiences and wide readership!"—Omid Safi, Duke University

"A major contribution. This book is the first systematic treatment of the Qur'an in English translation and, I think, is destined to be a seminal work."—Ziauddin Sardar, author of Mecca: The Sacred City

"This is an excellent book—and with recent interest in the Qur'an both positive and negative, the time is right for it."—Amir Hussain, coeditor of A Concise Introduction to World Religions